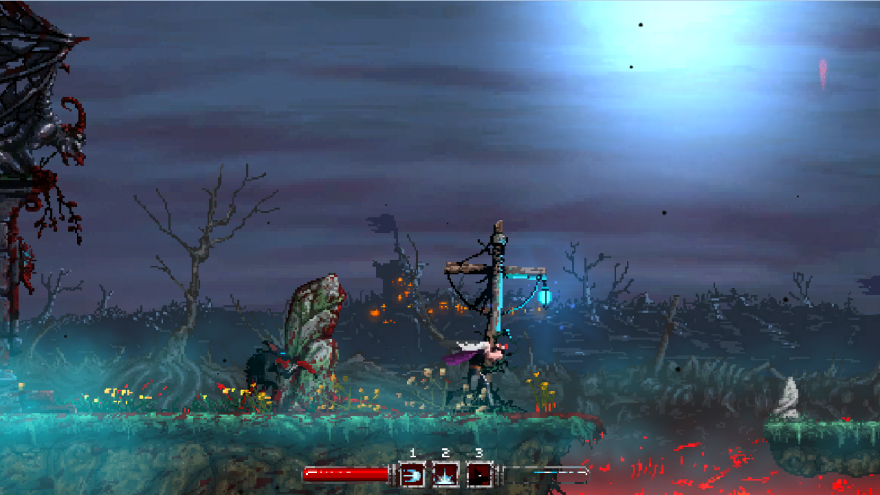 Heavy metal is the musical and theatrical manifestation of mankind’s lizard brain. It’s an auditory siege that rifles through our ancient and violent nature that was once necessary to survive. This music transmutes those base emotions through myth, metaphor, and performance through modern instrumentation, impossible without electrical amplification. The costumes vary from latex to bullet belts, corpse paint to standard issue black, and on the stage the lights are kept low or flashing. Every note and image is calculated and well-rehearsed, because metal thrives in the extremes and requires complete attention to maintain the shared illusion for everyone at the show.

But heavy metal also rides a thin line between serious and silly, and it takes very little to disrupt the collective vision shared between band and audience. The metal-themed arcade-action game Slain! is draped in the iron and blood of metal and melee games, but stumbles over itself by playing too close to the standard tropes of each. It coasts on lip-service and too often exposes the seams between fantasy and reality that both games and heavy metal require to thrive.

Kickstarted to success due to an auspicious art design, Slain! is drenched in rivers of gore, shrouded in the darkest goth undertones, and framed with choice windmill gifs. The spirits of Mayhem and Watain were summoned and put to pixels with a “Carpathian forest in late Winter” filter. Early videos promised something meticulously bleak and brutal, with visual references to orchestral metal videogame touchstones like Castlevania: Symphony of the Night (1997) in all the right ways. And Slain! delivers on its optical oaths. Blood and viscera drips, explodes, splashes, and sprays from every enemy and nearly all surfaces; magic glows and pops from the screen; most enemies throb and lurch as lurid mannikins mocking the fragility of humanity. It’s a hideous cauldron boiling down the spectrum of metal into a viscous on-screen ooze.

This thrash abattoir wallpaper is tacked over a side-scrolling arcade brawler frame, the tract housing of videogames. Such a house does its job with mere adequacy: putting walls between you and nature’s howling winds and baying coyotes, a roof that blocks harmful UV rays and acid rain, a garage that stores guitars unplayed and amps never plugged in. Similarly, Slain!, affectionately nuzzles Altered Beast (1988) with a werewolf stage, cribs Ghosts ‘n Goblins (1985) for slight weapon variations and cemetery appeal, and nods respectfully towards the original Castlevania (1987) for everything but the ham. Which is all to say that you’ve played this game, with slight updates and adjustments, for nearly 30 years.

You are cast as Bathoryn, a Norse-ish warrior who is pulled from the sweet sleep of death to (once again?) face demonic hordes, with hints of redemption and revenge as his motivation for unleashed barbarity. When Slain! was first released it was an “early access” title in everything but name, a borderline unplayable one at that. Since then a few patches have balanced what was initially a sword of felt and unstoppable spongy eldritch nightmares, resulting in a much more enjoyable stroll through Baphomet’s campground. The way to use magic is clear, Bathoryn has mastered a parry and riposte that is thuddingly satisfying, and the difficulty scales from peon to end-stage generals on a more logical spectrum.

The structures Slain! sends you through are mundane—consisting primarily of x/y Cartesian planes with timed platforms, where you experience the thrill of waiting for a floating Uber. As such, a formula emerges: crush monsters, linger around for a platform, jump over blood pits and traps, maybe even stroll contemplatively for a spell, repeat. These stages aren’t horrendous, but no one will accuse them of being inspired, and there is nothing more boring than by-the-numbers metal or level design. Time has not been kind to the baseline beat ‘em up genre, which requires only strolling around single-mindedly with an occasional attack or jump.

The formula goes: Monster, linger around for a platform, jump over blood pits and traps, repeat.

Slain! fails to juice the established arcade recipe, though, to be fair, no one shreds on their first pass over a fretboard. It’s a serviceable, basic game, which just means that it requires the theme and dressing to really shine. As such, it’s quite disappointing that the writing and music are almost parodying heavy metal source culture rather than paying tribute. The dialogue seems to have been lifted directly off the geometry folder of a high school hesher or an Odin-centric fanfic blog. It would be laughable if it didn’t give me a headache from rolling my eyes so hard, a pain exacerbated by the generic chugging of the soundtrack, more nü-metal than true kvlt.

The script and soundtrack of Slain! are tone-deaf and distracting; no writing at all would have been preferable and there are plenty of much more compelling and thematically appropriate long-form doom jams one can throw on the turntable while playing. There’s no doubt that metal can be cheesy, but it’s a mostly self-aware swiss, a performance of overblown aggression that at its best is a nuanced reflection of society’s hypocrisy and a font of institutionally repressed emotion. Slain! embraces only the aspects of metal that inspired Tipper Gore’s misguided helicopter-parent fear in the 80’s, as if it believed a “Parental Advisory: Explicit Content” sticker and pissing off your parents are where extreme music begins and ends.

Slain! reveals itself almost immediately as a demo tape with a splashy cover, a composition in progress that carries a spark of potential buried in the mix. It does not live up to the promise of its visuals, instead merely keeping pace with its influences white not daring any attempt to surpass them. There is some potency of its aesthetics that closely align with the indubitable garishness of black metal, but the writing and soundtrack lack a refined understanding of the metaphorical mirror metal holds up to civilization. Slain! is a poser, well-dressed and intentioned but vacuous, contributing nothing to the scene. It has the spiked gauntlets, the long hair, the denim jacket; but the house lights are on and everything’s out of tune.