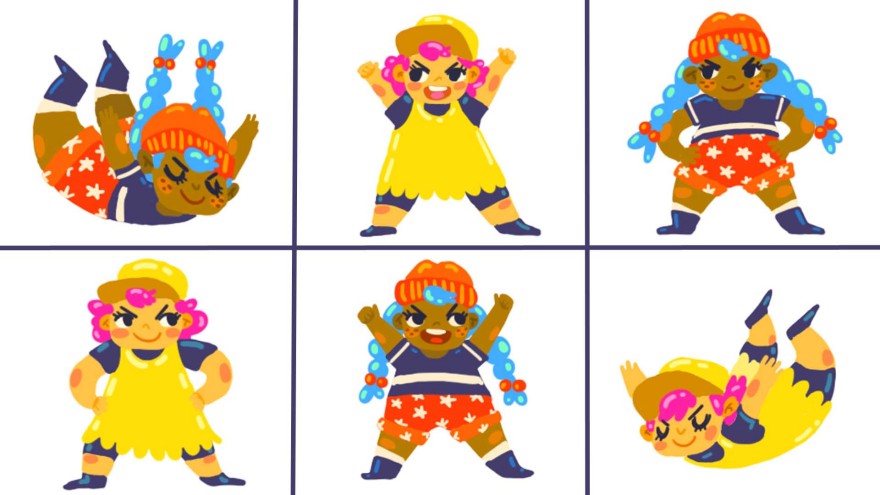 For everyone who genuinely cares about games, the recent past has been an unnavigable hellhole of stress and accusations. I have no advice on how to navigate it, but I am here to provide some of you with much-needed (and relevant) stress relief. It’s called Slam City Oracles. And it’s about two teen girls (literally) shaking up the system by ground pounding the hell out of anything that gets in their way.

Creator Jane Friedhoff describes Slam City Oracles‘s aesthetic as “cutesy with an edge.” It mostly reads like a dance party from middle school: high expectations, crashing anticipations, general nuttiness. To me it feels like a lot like when my bottled up energy and frustration gets finally uncorked around my best girlfriends, and we decided that we will have a good time, goddamnit—whether we’re at a pizza hut or a dive bar.

“It’s sort of a love letter to other women in games.”

“Most women are socialized to be very self-conscious about their bodies—to constantly be more waiflike, be more polite, be less loud, take up less space,” Jane says about her initial inspiration for making the game. “Although the game looks super cheery, a lot of it was influenced by those feelings of vulnerability. And the more immediate stresses of being a woman in game dev, and a woman who co-founded a women in games initiative.” Like many others, Jane has experienced the full spectrum of “female game dev treatment.” Everything from online harassment, to people doubting her “true gamer” status, and even belittling her programming abilities. “Those feelings definitely influenced my creation of a game where the women are invincible, where they impact the world instead of the world impacting them. It’s sort of a love letter to other women in games, who might have those same feelings of loneliness and vulnerability.”

After an experience like the past couple weeks—and a lifetime of responding to an undercurrent of the “take up less space” mantra—it’s a love letter I needed. Because first and foremost, Slam City Oracles is a fun game. While its inspirations stem from serious issues, it engages the player through satisfying, unadulterated play. “I try to make games that make players lower their guard, embrace silliness, and behave in ways they wouldn’t ordinarily,” Jane explains, “because I think that can spark something in them that lives on after the game is over.”

At a time when explorations of the teen girl experience in games seems still relegated to the context of brutal male-oriented game environments (as seen in The Walking Dead and The Last of Us), SCO is a welcome change. Most relevantly, it shows how diversity in game designers does not lead to a single “type” of game. Diversity in game designers, of course, invites a whole spectrum of unexplored experiences—including ones that center around mindless, unpoliticized, ground-pounding fun.

Because the world of SCO is the kind of thing I can imagine a very talented school girl doodling in the margins of her science notebook. It’s equal parts silly, bubbly, and brassy. With art by Jenny Jiao Hsia, which Jane says “really gave the game its soul,” the design of SCO aims to “contrast the somewhat violent mechanic with a really adorable look.”

SCO‘S main mechanic, built around the concept of ilinx (a term coined by Roger Caillois), is a constant loop of satisfying, tummy-turning orbits and plummets. Quoting Caillois, Jane says ilinix “games pursue feelings of vertigo and destroy stability, that cause the mind to surrender to a ‘kind of spasm, seizure, or shock which destroys reality with sovereign brusqueness.’” Ilinix is that swooping sensation you get in your gut when your plane suddenly dives down toward the water in Luftrausers (another one of Jane’s inspirations). The pleasure of SCO, known as “destructive ilinix,” comes not only from vertigo but also “seeing the world respond to your actions, which is incredibly satisfying. It’s not so different from that fun childhood experience of raking leaves and jumping into the pile.”

SCO‘s sense of play and impact feels like exactly what the teen girl experience in games needed. “I really do believe in the power of play and games to shift our perceptions and give us a different perspective on the world,” Jane says, “and I don’t think that a game has to be didactic to do so.” If you play SCO devoid of all knowledge or sympathy for Jane’s more socially-oriented inspirations, you’d still be entertaining yourself with spacial dynamics and mechanics that “subvert the typical messages we get about women’s bodies.” As Jane points out, “taking up space is what gets you points. The characters are stocky and heavy because that’s critical to their ability to slam things—and it’s not a punchline, it’s a quality that makes them better suited to win.”

SCO feels like the female body fantasy counter to all the female body horror that came before it. Vagina Dentata (wonderfully explored in the 2007 Sundance film Teeth), and other fear-laden female power imagery, deserves to be off-set by some fantasy every now and again. Because these images of the body, whether fantasy or horror, often work inside us unconsciously—especially when we’re young and uncertain about the changes we’re already experiencing. Most times, we process these images without thinking, and to some extent we are incapable of resisting their messages. Certain images can even affect us fundamentally, like when Jane discovered riot grrrl as a teenager and the movement’s “give-no-fucks, be-loud-and-take-up-space attitude really fed my soul.”

I’d be very happy to see younger people play SCO, because, as Jane explains, “these moments where the rules of society don’t really apply—where your rules and mechanics give [players] express permission to really be playful—can be transformative. And I don’t think we have these moments often enough. I think it’s important to create moments where we can shake off the typical ways we interact with or view our bodies.”

Having debuted Slam City Oracles last month at NYU’s No Quarter Exhibition, Jane plans to have a commercial release sometime in the next year for both PC and Mac.