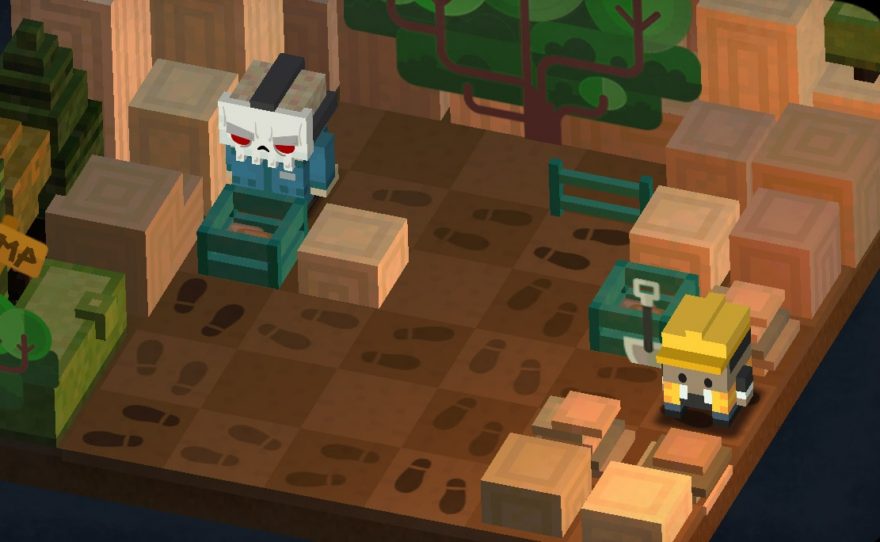 Slayaway Camp is a puzzle game about massacring hapless teenagers, and, perhaps fittingly, it comes from a place of aggression. “After a decade [of] making gems go clink and pegs go… Peggle at PopCap,” said Jason Kapalka, one of the founders of PopCap, and now returning to independence with Blue Wizard, “I had a lot of pent-up aggression and wanted to work on something really violent and gross.”

A sliding puzzle game isn’t the most likely candidate to vent such vicious desires. And that’s entirely the point—Kapalka is looking to assault the sparkly, saccharine game genre with Slayaway Camp in action. As such, it will has you trot your skull-faced killer around the place laying the smackdown on unsuspecting victims. Move in a direction and you’ll keep moving until you hit an object, whether that’s a wall, a fire, or someone you want to headbutt to death.

All of this isn’t coming out of nowhere. Kapalka says he’s a long-time horror fan and so he drew on this when deciding on what theme the original Slayaway Camp prototype should have—originally, it had a “generic Star Trek sci-fi feel.” It turned out to be a great opportunity to pay homage to the VHS-era of slashers. “One day we just thought, hey, what if these aliens or blobs you’re supposed to be eliminating were actually teenagers, and you were a psycho killer out of a horror film?” said Kapalka. “Everybody can get behind the idea of killing annoying teenagers.”

There’s been a run of 80s nostalgia in pop culture recently—Kapalka names the sci-fi TV series Stranger Things as the most obvious right now—but having started work on Slayaway Camp a year ago, it was never meant as a way to bank on this popularity. “Of course, I don’t think anyone has really gone for a Sokoban-with-decapitations approach yet,” Kapalka said. The game definitely has parallels in how it plays to many of Draknek’s puzzlescript titles, particularly Sokobond (2014), but it’s overlaid with the inspiration from classic horror tropes – fire, swat teams, and even cats (which you can’t kill as it’ll cause the movie to be shut down for harming animals) will be some of the obstacles you need to get around.

That approach should be what makes Slayaway Camp stand out. It’s not going for the glowing neon vein of 80s nostalgia as seen in Stranger Things‘s title sequence, nor is it on part with the grindhouse seediness of Power Drill Massacre. Instead, Slayaway Camp sits somewhere in between: it’s blocky and voxelated, meaning Blue Wizard can render its gruesome subject matter in a more friendly light—a game you wouldn’t be afraid to play on a train. It’s a cloyingly cute murder puzzle. Friday the 13th (1980) remade in pleasing voxels.

Slayaway Camp is coming to Kongregate later this month, before launching on Steam and mobile devices soon afterwards. Keep an eye on it over at its website.