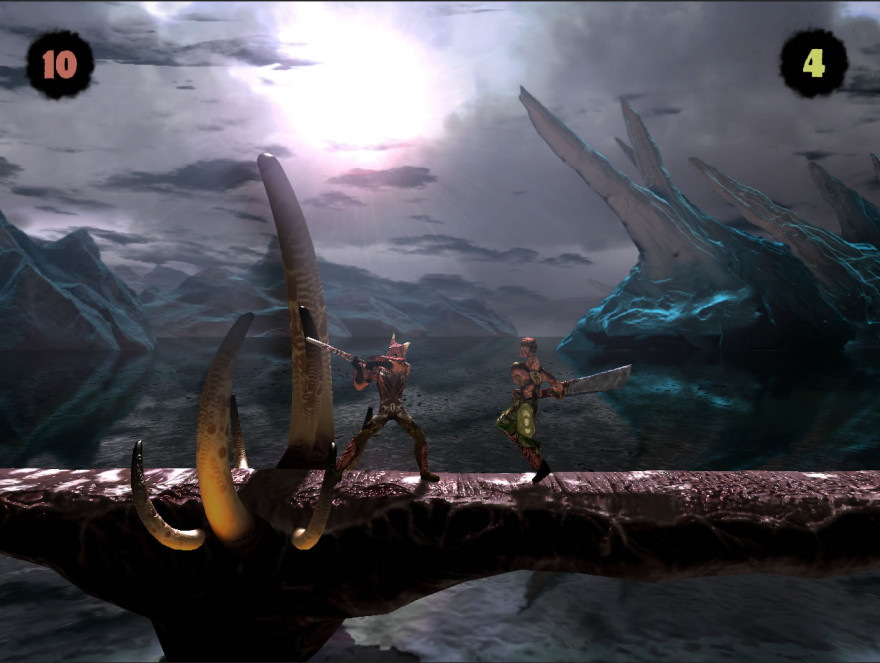 When Jo Lammert from White Whale Games handed me a controller to play Slayers, she might as well have stolen a C-note from my wallet.

The transaction was like a good Pixar joke: To her, she was giving me a fun thing to play; to me, I saw the act though an adult’s eyes, calculating investment and time. Because Slayers is the game that finally sold me on buying an Ouya, the small $99 mini-console with the record-breaking Kickstarter that was sent out to early backers last week before a wide retail release on June 4th.

Slayers is a standalone two-person version of their game God of Blades, already available on iOS and Android devices. I could have played it there already. I haven’t. It’s coming to PC and Mac soon. This does not fill me with expectancy and joy because–hold your fire–I don’t enjoy playing games on a computer. This is because my heart is weak and my fingers lack dexterity: I get it. But my position stands. Insert maxim w/r/t not defecating where you eat, and you’ll begin to understand why that controller, and its unstated link to a TV in my living room, is enough to capture my attention.

Ouya provides transit to a world of content many have dismissed out of hand.

I saw the Ouya in person for the first time at PAX East in Boston. The system was even smaller than I expected, a tiny translucent cube (this was the development kit build; the retail version will be a sleek silver). A couch was set up in front of the monitor, a clear nod to why Ouya even exists. All of the games coming to the platform could either be made for PC or have already been built for Android devices. Ouya sticks them on your big-screen television with a familiar, button-laden controller in your hand.

It’s still TBD whether there will be an audience for smartphone games in the living room. The low entry cost provides little barrier for obsessive gamers and curious mainstreamers alike. When prediciting a system’s success, many like to say, “it’s all about the games,” but I think this is only half-right. It’s also about the way we play those games. And for me, Ouya provides transit to a world of content many have dismissed out of hand.

Combining an endless runner with a fighting game, you use a single input—the left joystick—to attack and block as you clash swords and eviscerate with ease. Each player controls a cadre of twenty-five minions, one at a time, in a battle to chip away your opponent’s forces until only a champion remains, its back against the wall, left to mount a final stand. The action takes inspiration from the painterly covers of trashy mid-20th century fantasy novels, i.e., it’s gorgeous. Flick the left stick away and you’ll block an incoming blow. Flick the stick up at just the right moment and your weapon cleaves through your opponent’s upper-most vertebrae.

I’m not a proponent of game violence; that said, my 12-year-old lizard brain, numbed by atrophy after the Mortal Kombat II saturation of 1993, jolted to life. Decapitation has never felt so smooth, a tiny reward for good timing and guessing correctly. There’s a rhythm and urgency to the combat made possible by the limited choice of inputs. Call Slayers a perpetual rock-paper-scissors machine ripped from the pages of Weird Tales.

God of Blades is a separate single-player campaign based in the same world, with an extensive story, visuals influenced by the great pulp adventures of Robert E. Howard, and a brilliant augmented-reality feature called Loreseeker that encourages you to go to a real honest-to-goodness library to unlock new weapons. But it’s Slayer’s local competition that inspires me to impulse buy another box for my living room. The game was originally made for a party amongst friends, the whole thing cobbled together in days. Now the mode will be included in versions of God of Blades released on Steam and Ouya.

In fact, you can already play Slayers for free on your PC or Mac. Sign up over at Brandon Boyer’s indie paridiso Venus Patrol and you’ll gain access to the game I played at PAX East. I did just this as soon as I got home. Then I downloaded the .zip file. And unpacked it. And tried to open it. But a file name needed to be changed. Then something wouldn’t open. And I unzipped another file into a separate folder and now I have three mirror versions of Slayers on my Sony Vaio laptop, none of which let me access the game.

I realize I’m the problem here. I fully admit to having consistent brain-malfunction when it comes to the simplest of PC gaming. But if I have trouble, how many other potential players are locked away from the growing range of brilliant content out there? How many players don’t touch their touch-screen devices after clumsily wielding one too many virtual joysticks? The Ouya (and Valve’s Steam Box, whatever form that may take) could solve this problem.

And I’ll be there, controller in hand, slaying all who dare enter. Bring snacks.