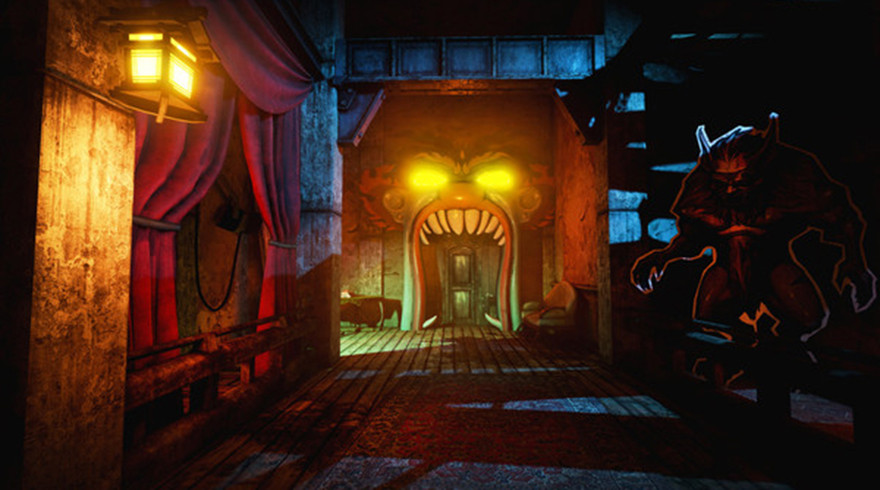 It is impossible to play Funcom’s The Park without thinking of recent smaller, more intimate, and psychological horror films like The Babadook and Session 9. Though it may be inaccurate to bifurcate the horror genre into two categories—the grotesque and grand guignol films of, say, Wes Craven, against smaller, more intimate and compact films—it’s worth doing so to note the way in which these divergent categories reflect two opposite approaches towards fear. In one approach, terrible things happen to the happy-go-lucky teenagers of A Nightmare On Elm Street or Until Dawn, and all the horror is external—at times literally so, in the shocking displays of violence and the presence of gangrenous monsters that haunt the forest and the neighbourhood. But in the latter category, we are the monsters: the horror is internal and it is impossible to delineate where our flaws end and the nightmare begins. The former is predicated on shock and surprise; the latter on the eerie familiarity we find in depression, grief, or loss. Where does the monster in Session 9 ultimately live? “I live in the weak and the wounded, Doc.”

The Park takes the player through a leisurely two-hour (or hurried one-hour) tour of the fictional Atlantic Island Park, a dilapidated place that shut down due to the accidental deaths of employees (of course) and the murder of patrons (de rigeur). From the very first ride onwards, the general theme of the park—and by extension, the videogame itself—is one of curdled joy: good times made grotesque, fun made freakish. The protagonist, a single mother by the name of Lorraine Maillard, has taken her son Callum to the local amusement park for the day, only to return in the evening when they realize they’ve forgotten his teddy bear. Out of frustration, Callum runs into the park ahead of the player and then disappears. What follows is an unsettling search through the park: the photo negative of a more conventional day out, where you ride the rides and sample the atmosphere, without lines or crowds or the other mundane inconveniences, all the while Lorraine monologues about Callum, her past, and her increasing resentment towards the burden that is her son.

The atmosphere of loneliness and isolation is as essential and tangible an experience as the Ferris wheel or the roller coaster, but made more central to the videogame by the one marginally innovative element offered by The Park: the ability to, at almost any point, call out the name of your missing son. The ubiquity of this gesture is to be noted: right-clicking at the beginning of the game captures the early sense of harried irritation with the hint of a Bostonian accent: “This isn’t a game, Callum.” As the tension grows and the park becomes more and more unnerving, the voice grows more desperate and accusatory: “Give me back my son!” But the real cleverness here is how it fills up the empty, atmospheric space of the game. Walking between rides (and you will do a lot of walking) and exploring the weed- and rust-strewn paths of an abandoned amusement part is an empty experience: there is only so much tension that the half-heard voice or dissonant music can supply. The need to click and call and click and call becomes a way to interact with this empty space—in the same way that players will run and jump towards an objective in any other game—that reinforces the terrible gravity of the situation: this woman’s son is missing in this place. Callum will call back, of course, encouraging his mother to follow him, to come and play, to rescue him, and then—when the game embraces its tenebrous surrealism—he stops calling back at all.

In other media, we have a superfluity of morsel-sized horror stories: Lovecraft made his reputation from the ability to churn out short eldritch narrative after short eldritch narrative; Shirley Jackson’s “The Lottery” was monocle-poppingly shocking to the genteel readers of The New Yorker in 1948, while yearly anthologies are released by small presses that specialize in horror fiction across the world. The idea expressed in the aphorism “had I more time, I would have written you a shorter letter” is an expression of the difficulty posed by concision and preciseness. A variation of this idea is often attributed to American President Woodrow Wilson: “If it is a ten-minute speech it takes me all of two weeks to prepare it; if it is a half-hour speech it takes me a week; if I can talk as long as I want to it requires no preparation at all.” Length and breadth are, if not safe, then at least comfortable; a curt and crisp piece cannot afford padding: it must be all edge, and no handle. This is not to argue that The Park is a brilliant example of innovation in an industry of bloat, or a novel piercing chill in a medium that loves horror—only that, when you realize that the haunted house looks eerily like a gingerbread house, or that your path is a perpetual, literal spiral, you see how damned careful The Park is about using its limited reach to great effect.

As noted above, this game is impossible to play without thinking, specifically, of the Australian horror film The Babadook. The comparison is illustrative of the thematic hook the videogame tries to bury into your heart: without revealing too much, The Park and The Babadook share similar analogies, while their respective characters (in both works, it’s a mother and her child) undergo similar struggles and share similar afflictions. However, it is where they differ that The Park shows its distinct and dark strength: as the player spirals towards the haunted house, and continues spiraling downwards ever afterwards, the sheer weight of The Park’s curdled hope and joy denies the optimistic ending of its double from down under: in the end, grief and loss cannot be grappled with. Sometimes it cannot be withstood. The monsters win, the humans lose, and the uneasy fact is that both those creatures are the same person.