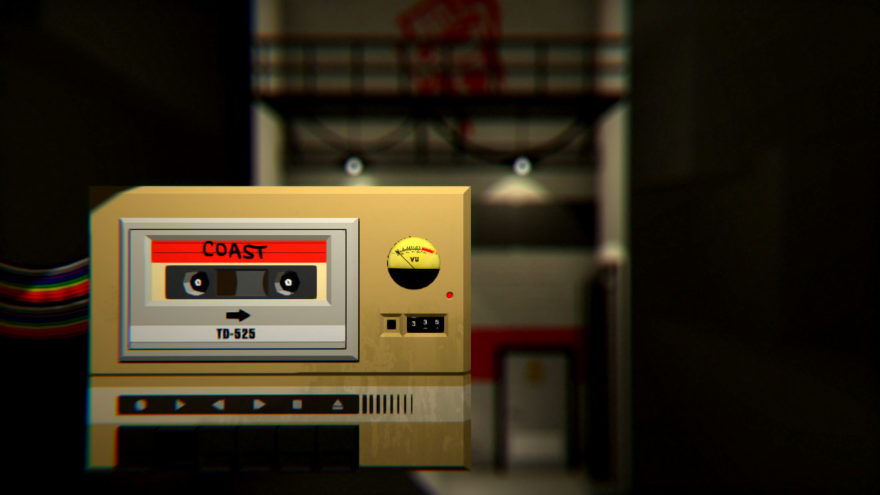 Small Radios Big Televisions, a game about the joys of broken analog tech, is coming to PlayStation 4 and PC on November 8th. Mostly, it wants you to collect cassettes and play them in a tape recorder: special attention is given to the tape sliding into the tray, the chik of it being locked in, the reel slowly spinning to unwind its contents. For someone who remembers doing this over and over as a child bored in their room, it’s a sensual few seconds; the familiar choreography plugging straight into the spectral residue of fond memories.

But that’s only the beginning. The tapes you play are labelled with a single word like “FOREST” or “ROAD,” typically remote, countryside locations. It is to these that they transport you, playing an azure, perfect moment on loop with its accompanying woozy soundtrack. In these moments I’d believe that Boards of Canada had made a videogame if you had told me so.

their previous perfection has been warped

In the first couple of locations you enter through these tapes, there are gems spinning on clear display. Click and you collect them, bringing the tape to an end. Later, after using the gems to unlock doors in the factory you navigate, you can throw the tapes into a grinder. They look no different on the outside afterwards, but venture to play them on your tape player once again, and you’ll see that their previous perfection has been warped, the music with it.

I believe it was at this point I really started to give a shit about Small Radios Big Televisions. Finally, I thought, a game that gets me—bending data to enter my heart, we skip and hold hands as lords of the tape chew. But let’s not get too carried away. This is a puzzle game after all; a genre I’ve always struggled to get on with. But at least its puzzle components are in symbiosis with its analog desires.


Around its deserted factories are big weighty gears and y-shaped levers hanging from the walls for you to play around with. Lights must be switched on and off, bulky steel doors unlocked, and yes, television screens unscrambled. You operate machinery in celebration of manual labor and 20th century technology (Brendon Chung will be proud). But more importantly, at least to me, it wants you to piece it all together and then break it all—to see the beauty in distortion. You break those cassette tapes not just for the fragmented deformations, the disrupted noise, but because sometimes it’s the only way to find the gem hidden inside that tape.

It is a game in which you succeed on the back of technological failure. It presents a simulation of malfunction that, yes, you do have to puzzle through, but can also enjoy for its aesthetic merits too. And that’s enough, at least for me.

Small Radios Big Televisions comes out for PlayStation 4 and PC on November 8th. Find out more on its website.