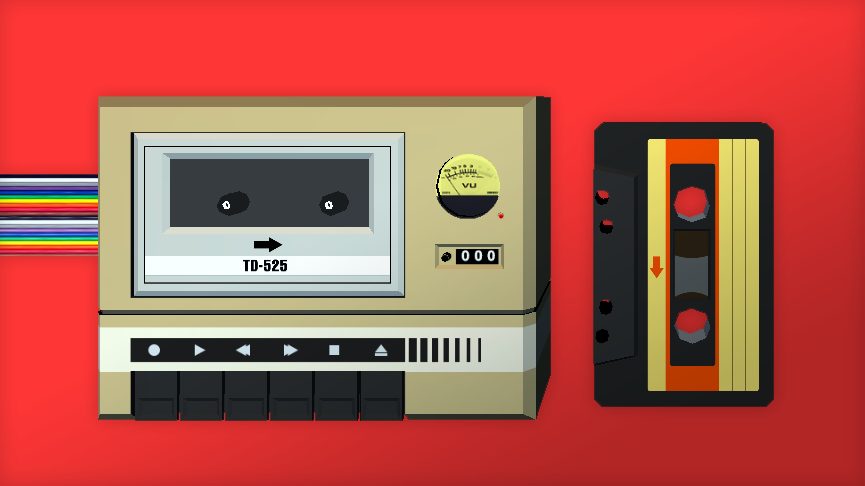 Owen Deery’s fascination with analog media started when he was a kid. The initial spark was struck by the father of his childhood friend, who kept a whole bank of Commodore 64s in the basement of his house.

“The first time he pulled out the tape deck and loaded a game off a cassette it blew my mind,” Deery says.

The memory has remained vivid enough within Deery over the years for him to recreate it in his upcoming videogame Small Radios Big Televisions (SRBT). That seminal tape deck plays the prestigious role of “data-walkman,” which is used to enter the worlds that are contained within old cassette tapes. By attaching this fantastical conceit to these tapes, Deery has given them the magical fondness with which we often look back at the media of yesteryear.

Unlike the intangible airiness of digital media, you can smell and feel a tape

At first, SRBT has you examine the outside of an isolated factory to find a way to enter. Once inside, you hunt from room-to-room looking for tapes. Upon finding one, you click it into the cassette well of the data-walkman, and it’s at this point that the dreamlike qualities of the game transport you into the world contained inside. Unlike the industrial, metal-edged factory you travel back-and-forth from, a natural scene populated by trees and peaceful environs swallows you up when entering these tapes. Deery likens the experience to “looking into a snow globe.”

This isn’t the first time that Deery has given a videogame an “analog feel.” Check out the scratchy visual interruptions of his action arcade game SBACE. Having grown up with VHS tapes, Deery admits that part of what drives him towards this particular aesthetic is nostalgia. It’s the supernatural power of a certain type of nostalgia that grabs him, the kind found in some music, such as Neon Indian and Boards of Canada—both of whom he’s been listening to a lot while working on SRBT‘s sound design.

Beyond that, analog media possesses a specific kind of physicality that Deery wants to work with. Unlike the intangible airiness of digital media, you can smell and feel a tape, but more importantly, the data it stores can be distorted so easily, over and over to produce new grisly effects. “I feel it’s almost like adding reverb to a recording in that it alludes to a larger world that the piece came from, it gives personality,” Deery says of corrupting analog data.

His appreciation of the ruinous experimentation that analog media allows is why one of the main features in Small Radios Big Televisions is distorting the tapes you find. As you explore their inner words, you’ll find items that you can bring back to the “real” world outside of the tape. These items will be used to progress further in the game. What you’ll discover, however, is that not all of these items can be immediately accessed. Some of them are only exposed once the data on the tape has been suitably corrupted. This means purposely scratching up the tape and then re-entering the world as it degenerates due to the damage it has suffered.

At just eight weeks old, SRBT only has a single factory and three separate cassettes with attached worlds to discover. Deery is looking to build the game out further with plenty more cassettes to find as well as more explorable hub worlds that move beyond drab factories and into more organic structures.

The vision that drives him to create SRBT involves “having a backpack filled with tapes that are all different separate worlds that you can just put into your tape deck (which may or may not be connected to your brain) and explore.” He’s hoping it will resonate with other people and plans on submitting it to festivals in the near future, with a further plan to have the first public showing in mid-October.