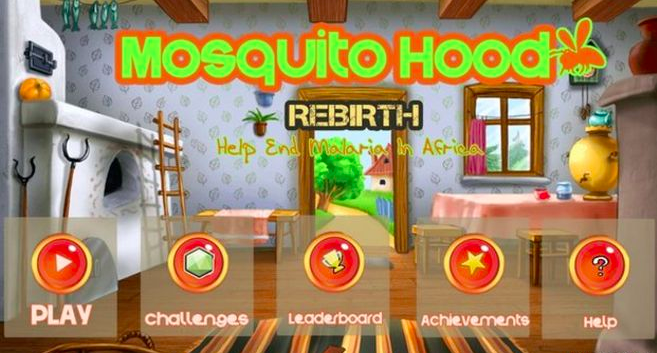 The game, which was first released by Kenya’s Momentum Core in 2013, challenged players to swat pesky mosquitos in progressively more difficult challenges. “Malaria is transmitted among humans by female mosquitoes of the genus Anopheles,” the CDC explains. Temperature and humidity are crucial factors in the development of the parasite, which helps to explain why outbreaks are clustered in certain localities, including Kenya, where the BBC reports that the government pledged to “to donate one mosquito net to a family living in a malarial zone” every time a player completed Mosquito Hood.

First, Momentum Core’s deal with the Kenyan government appears to have worked out well. “[Momentum Core founder] Allan Mukhwana has been instrumental in ensuring that more than 1,400 households in high-risk malaria zones in rural Kenya receive insecticide-treated mosquito nets,” the BBC now reports. This is an interesting twist on the normal games-for-change and gamification narratives: Mosquito Hood had a socially conscious message, but recognized that change could not solely be achieved by spreading that message. This seems like a realistic assessment of what videogames are good at and where collaboration is advantageous.

Second, the BBC uses this news as an occasion to discuss Africa’s gaming industry. Compared to, say, America’s multi-billion gaming industry, those in African nations are quite tiny. “But over the coming years,” Gabriella Mulligan writes, “All the African gaming markets are expected to see annual double-digit growth.” That boom is unlikely to look like American or European gaming booms. “Due to the high rate of mobile device penetration,” the founder of Nigeria’s Gamsole, Abiola Olaniran, told Mulligan, “mobile can serve as a converging point for both casual and hardcore gamers.” Mobile has the additional appeal of being hospitable to more affordable games than traditional console releases. Should it happen, Africa’s gaming boom could therefore be interesting as a business model for gaming industries on other continents.

It’s hard to be more specific than that when talking about African games. What does “African games” even mean? This, in short, is the “Africa Is A Country” problem, to borrow the tagline of the excellent web collective and Twitter account. Africa is big (obviously) and diverse (obviously) and multinational (obviously, to most) and consequently we should expect “African games” to be varied. Indeed, the comic books and games made by Kenya’s Leti Arts have little in common with South African studio Thoopid’s puzzler Snailboy or Maliyo Games’ Okada Ride, which is all about the experience of driving in Lagos, Nigeria. Broad trends and the possible development of continental ideas through gaming are interesting, but they should never obscure the variety of games being produced in nations across Africa.