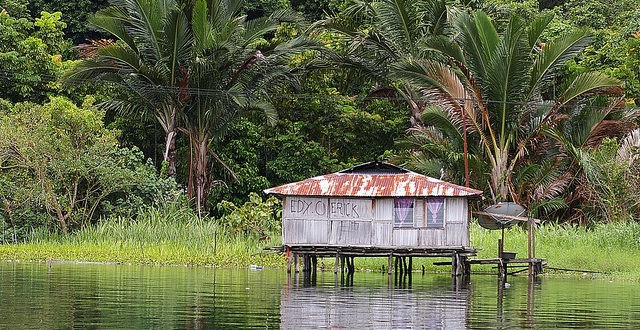 The biggest shock in coming back to America after a year teaching in Asia was when the plane touched down in central Texas. The wheels had barely connected with the asphalt when the cabin collectively breathed a sigh and everyone took out their smartphones and iPads. A chorus of tones, email notifications, and texts filled the cabin. I’m not in Laos anymore, was all I could think.

Living in the Third World puts one back 30, 50, 1,000 years. When I was seven, our family lived in the middle of a slum in Java, Indonesia overlooking a wide vista of rice paddies and farms. We had books and a radio, but no television. The books had yellowed with acid, and the comics were all leftovers from the ’70s.

I’m not in Laos anymore, was all I could think.

We made our own Mario. I came home from school one day to find my brother and his friends from the streets on the cold tile floor scribbling crayons on construction paper. The paper was a screen, with a control pad drawn beneath, and they were designing death traps: pits of lava, silver spikes, floating fireballs. These levels they “played” with their index fingers, tracing a path, occasionally dying arbitrarily. I decided to become a game designer. Cutting another sheet of paper to size, I appended it to the front of the level to make a kind of flip book, and I set to designing a pyramid of death. The next was an ice cave, and the one after that was a desert. By the time I grew bored, I’d drawn up at least 20 levels.

These levels held a strange mirror to my life. Weeks after sketching Level 16’s quicksand, I found myself sinking in actual quicksand at a dormant volcano. An angry farmer chased us through the rice paddies with a machete. Years later on the island of New Guinea, I nearly fell to my death in a seemingly bottomless pit. The disparity between the digital world and my own grew larger as our family relocated to the central plateau of New Guinea when I was a teenager.

The island of New Guinea is vast, densely forested, crowned in the center with a ring of high mountains. My dad flew between disparate villages, knitting together a small network with much-needed supplies and transportation. A five day hike through the jungle can be flown in minutes. Most of the tribes in these villages lived in bamboo huts and traded pigs as currency. The people are dark-skinned, descendants of the Aborigines who migrated north from Australia.

We lived high in the mountains in a small town named Wamena. Dani farmers came down from the mountains wearing nothing but feathered headdresses and gourds to sell shells and game at the market. Our family kept a pig in our backyard hut overnight and watched it hunted and disemboweled on our front lawn, then ate it at dusk with the rest of the village. I spent many evenings hunched over my Game Boy, consumed by the 8-bit fantasy world while mountains and hoodoo loomed just outside our backdoor.

We made our own Mario.

For a year after college I taught English in Laos. Our rural town had just one brand-new convenience store, stocked with overpriced Thai imports. In the central row was a section of cheap Chinese game systems masquerading as PlayStations. Yellow cartridges were also on sale. For about six dollars I picked upBao Bao Long, a “deluxe” version that came packaged in a large box covered with pictures of James Cameron’s Avatar. The cartridges advertised 256 games in one, but when I went home to play I found the same eight games renamed 248 different ways.

I introduced gaming to my Lao friend. The cords were so short we had to move the couch within a foot of the television, and the buttons broke on the 10th press, but I got a chance to show off my early American childhood. “This is Mario,” I told him. “This is Pokémon.” Granted, the Pokémon game was Super Mario Bros. remade with a Pikachu sprite. We spent hours saving Princess Peach-kachu (yes) and enjoyed every moment.

But a weird schism persists between life in front of the TV and life outside. It was one thing to save the pretty girl as an Italian plumber or electric mouse. It was another thing to take a night bus up to Vientiane, stop at a market at 2 a.m., and see 10-year-old girls dressed up as prostitutes on the side of the road. I felt completely powerless, reminded of my status as an outsider in Laos, an alien even in my own head, on the internet, in forums, on Facebook: how I was the person I wanted to be in front of a screen, and someone else when actually confronted with my sleepy expatriate self.

We are strangely empowered by these other selves—our digital avatars—in ways people haven’t been before. We learn, sense, and think differently. Our thoughts are simultaneously truncated and expansive. We are on a screen in Brazil, in Mongolia, on a train or in someone’s basement, and we’re not even aware. Yet we are also disconnected from billions of people, some of whom still live in the Stone Age, who are dying of AIDS and sleeping under mosquito nets. We are all the same: nobody here has evolved or become the Übermensch. Digital life has begun to separate us more than class, language, or ethnicity.

But a weird schism persists between life in front of the TV and life outside.

For my 16th birthday I found myself on an outdoor education trip on Yapen Island, about two days’ journey from civilization. As the new kid I was elected to play “Candy Shirt” with about 50 adorable five-year-old Papuan kids. The game was simple. Wearing a shirt covered with candy, I had to run from a mass of kids through the forest. I remember the moment the crowd rounded the side of the building for the first time, and how their eyes lit up with a kind of inhuman hunger. I knew that day what it felt like to be hunted for food. I managed to run for a long while before collapsing in a heap in the village courtyard as the hungry children pawed me like zombies. My training with killing zombies as Link or Chris Redfield were utterly alien out in the jungle where people bathed in the river, hunted pigs, and built houses on stilts.

Our universal language isn’t halted speech, text, or anything else. Modern videogames pay a crude, sporadically transcendent homage to something deeper, more substantial, that we all share. In the smartphone-saturated First World it might seem futile to dichotomize life into “real” and “digital”: these classifiers lose all meaning when we drop everything to run free in the wild world beyond.