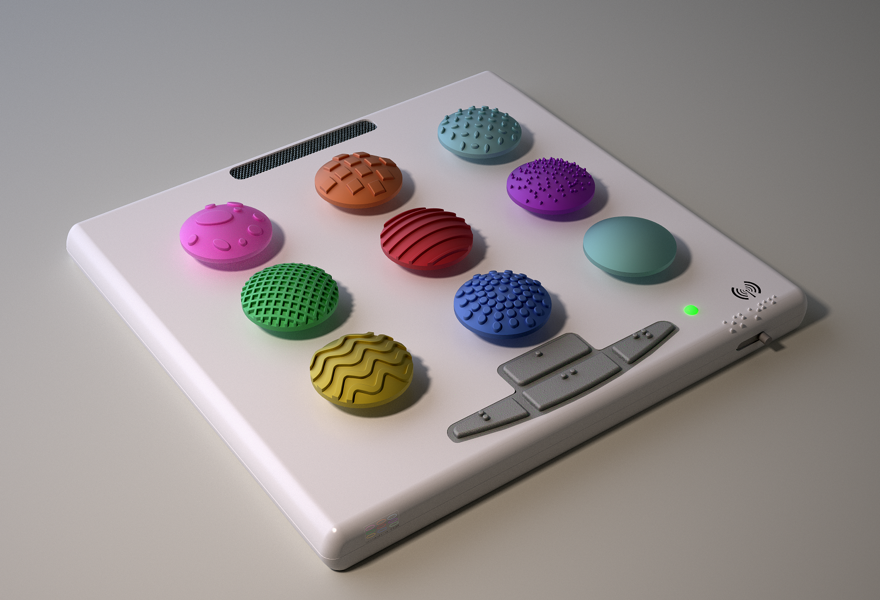 The playing of games is not simply a trivial pastime; it serves an important developmental purpose. As the University of Cambridge’s Dr. David Whitebread writes: “The evolutionary and psychological evidence points to the crucial contribution of play in humans to our success as a highly adaptable species. Playfulness is strongly related to cognitive development and emotional well-being.” As a result, an inability to access or play games can have a serious impact on a child.

Smash-a-ball, which is currently raising funds for an initial production run on Kickstarter, seeks to make the benefits of play available to visually impaired children. Developed by educational psychologists Nadia Guevara and Pedro Bori, Smash-a-ball encourages its players to press large textured buttons, either quickly or in sequence. It is composed of a backpack worn by the player and a board on which buttons are pressed. The backpack provides a tactile stimulus indicating which of the board’s buttons are to be pressed. Meanwhile, a speaker in the board provides audio cues as to what button—or sequence—should be pressed next. It’s a bit like whack-a-mole, only less violent.

As Guevara and Bori explain it, Smash­-a-ball “has been designed to enhance cognitive development in specific skills that are essential in visually impaired and blind people, such as; body and spatial awareness, memory, reaction rates and building self-esteem.” Whereas most toys exist to serve these functions, very few do so for visually impaired children. Smash-a-ball therefore aims to ensure that such cognitive skills don’t atrophy due to a lack of opportunities.

But Smash-a-ball is also fun and there’s no shame in admitting that. A shortage of games that develop cognitive skills is also a shortage of fun games to play. One of those problems may sound (and be) worse than the other but they are both problems. Play offers a variety of benefits and so all children should be able to access it.

You can support Smash-a-Ball on Kickstarter.