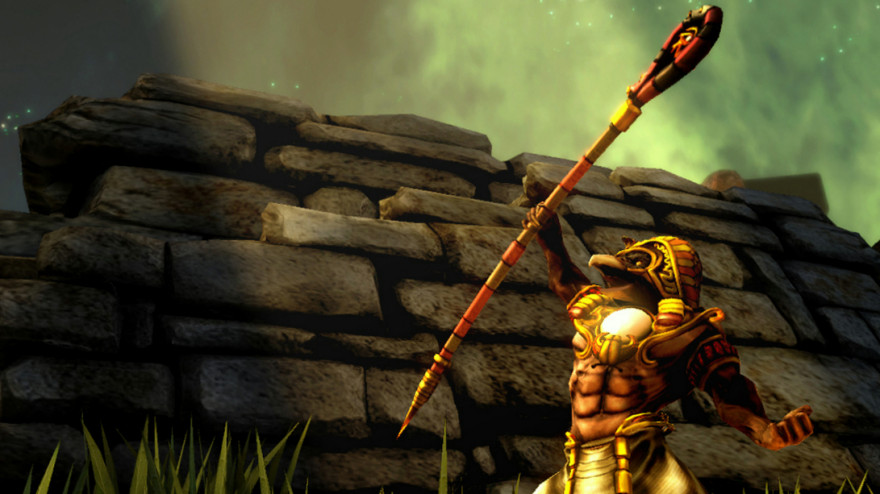 From the very first moment, it’s clear that Smite wants you to succeed: even the installer features a video tutorial that welcomes players to a world where gods battle each other, sometimes in an arena, usually in a jungle-ridden map defined by a trio of lanes. The game is perfectly okay with holding my hand, and I’m perfectly okay with that. Before I enter a match for the first time, the game senses my tentative presence and forces me to click on another video tutorial that explains the specific game mode.

Even as somebody who has spent so much of their life—solid weeks, according to Steam stats—playing Dota 2, and just as much if not more in League of Legends, these videos are a godsend. Smite is a MOBA, just like those two grandfathers of the genre. It’d be easy to assume that if you have played one, you can jump right into another—and to a certain extent, that’s true. But while the games are similar in their structure, the truth is that all three are more like modern tongues that share a common proto-language. I know lanes, I know minions. I know farming, I know jungling. As such, I am MOBA-competent; at the same time, I’m Smite–deficient. And the game wants me to know that it recognizes this: it wants me to know that it’s going to try as hard as it can to help me out. In the words of Purge’s infamous guide: “Welcome to Dota, You Suck.”

Son, you’ve got to learn to level up.

Smite knows it has to help beginners, because MOBAs are hard. These games don’t just have a difficult learning curve, they have eight. The difference between a level 1 god and a level 20 god at the opposite ends of a match isn’t the wealth of skills the player has—it’s the plethora of attack-amplifying knives stuffed secretly within his or her toga, multiplying the formerly pedestrian damage being tossed out. Combine this with a roster of dozens, and that’s a lot of knowledge; each god has a set of at least four abilities. If you want to survive here in this weird arena that is some sort of multi-cultural Ragnarok, son, you’ve got to learn to level up. Smite knows: when I’m finally in the match, the game has already checked a pair of boxes for me: auto-level skills, and auto-purchase items. And at the beginning, it works. Because I don’t have to focus on learning a library of items or comparing the numbers of each skill, Smite has enabled me to focus on the actual game.

While the traditional MOBA might draw most of its targeting and clicking from that of the RTS—activate power, click on thing— the gods take instructions from good ol’ WASD, complete with a totally superfluous jump button. And instead of giving orders to a unit with moves, attacks, and other command queues, each skill, each auto-attack is the result of a well- or ill-aimed skill-shot. Want to kill an opposing creep for the gold? Aim and time correctly. Need to land a stun on an enemy making an attempt on your life? Aim and time correctly. While Dota or LoL can at times be contemplative or Zen-like, Smite is awash in the bedlam of an action game. It’s this control scheme which ultimately enables the chaotic glee that comes with shoving one of Zeus’s lightning bolts into the gullet of an opposing player. At the best of times, it all comes together; everything feels powerful and godly.

But at the worst of times, it doesn’t. This is a result of the two disparate influences Hi-Rez is going for here: that of the MOBA/RTS and that of the action-shooter. It’s hard for them to co-exist, because we tend to expect a direct correlation via our actions in an action game—that is, a gun, rocket, or kraken bursting forth from the floor should, expectedly, render all obstacles or enemies into nothingness. While in any RTS game, it’s essentially about numbers: damage calculations that rail against a dwindling bar of health. When it works, it works really well; when it doesn’t, it’s incredibly disconcerting, and can feel more futile than a loss in any other game.

Then again: how do you balance a game of gods? Part of what keeps me coming back to Smite is, in fact, that roster, because each character is literally the stuff of legends. It’s as exciting to jump into the metal booties of Ares as it is the pajamas of Batman. And the variation on deities is to be applauded; here there are standards such as Athena, Odin, and Vulcan, hailing from the Greek, Norse, and Roman pantheons respectively. But there is also the Hindu god Vamana, the fifth avatar of Vishnu; Ao Kuang, the Chinese dragon king; and my personal favorite, Xbalanque, one half of the hero twins from the Mayan Popol Vuh (Shout out to Bill, my classics professor).

While I applaud the representation of, at this point, seven different pantheons and cultures, it isn’t without its problems. Part of why each god feels powerful is the character design, and for the majority of the cast, the design is great. Vulcan, Roman smith of the gods, carries a hammer and twin forges on his back, their fires raging with the light that comes from his eyes. Cupid is a sickly-sweet cherubic cartoon, while Ah Muzen Cab, the Mayan god of bees, sports terrible insect legs, wings, and a stinger which he fires like an arm cannon. There’s a lot of creative personification of eons-old legend, and most of it is fresh and exciting; the list could easily go on.

But the list would be almost entirely male. I was bemoaning the predictable depiction of Aphrodite, goddess of beauty: scantily-clad, over sexualized, incredibly busty, and poorly dressed for combat—all traits used by most fantasy games to define “beauty”—when a friend playing with me offered three words: “Look at Neith.”

Depending on the time in history, Neith was the Egyptian god of war or weaving. Smite’s portrayal assumes the latter and has her using a combination loom and bow; and with it, not much clothing. Golden stiletto heels which clip-clop as she prances around the battlefield. A top that is essentially a pair of ribbons that both manages to barely conceal anything yet also offer the gravity-defying support of a male-driven fantasy. Impossible curves filter into a bikini bottom, and that same roster that seemed varied and exciting now feels claustrophobic.

Hades is a legless wraith wearing fearsome bone armor. Hel wears white furs and lycra that emphasize her T and A. Both are gods of the underworld.

Ares defends himself with a sword, as does Athena; both are warriors. But one has full, battle-hardened armor, while the other wears thigh-high open-toed boots with stilettoes, a tan leg thrust out of a slit in a cloth dress.

Even Bastet, the Egyptian goddess of cats, is a scantily-clad humanoid form save a tail, cat features, and feet, which essentially also act as high-heels that sprout from always-poised calves which move towards the same, predictable, goddamn things: gold lace for a bottom; small gold ovals for a top. Above her animated tail is even the Y-shaped gold of a g-string which her thumb occasionally touches, as she enters an idle animation and juts out a hip and puts her hand on it, back arched for eternity.

In Smite, men get to be dragons, monkey kings, bees, fierce warriors, wolves, wraiths. Women get to be curvy, busty, and doe-eyed. Arachne is an obvious spider body with a half-naked female torso; red hair falls down to cover her round, chitinous breasts.

Smite isn’t as welcoming as it wants to be.

There’s a pattern here and it’s embarrassing. Yes, Artemis is fully clothed. Yes, Scylla is a young child hiding monstrous sea-beasts. Yes, the men are ridiculously muscled. Yes, this is a standard trope across videogames. None of this excuses what is essentially another tally of complacency in both the genre and the medium that Smite is entering. And it’s a shame, too; because so much of Smite’s experience is dedicated to introducing new players not only to the game, but the genre as a whole.  Yet it feels so incredibly self-defeating to feature a cast of characters that, to a large, obvious portion of potential players is, at best, unwelcoming.

I wish I could say this doesn’t affect the game, but ultimately, it’s indicative of a problem endemic throughout Smite: it’s not as welcoming as it wants to be. And as I get deeper in, I begin to get more frustrated. Because, eventually, those beginner-friendly features lose their automatic checkmarks, and the first time I’m in a match without it buying items for me, I stumble: I have no idea what to buy, or when, even with recommendations. While Smite was holding my hand, it wasn’t really teaching. This is just as much my fault as it is the game’s—I knew I was going to have to learn eventually, envelop myself in specific item sets, enemy counters. In games like these, success is usually tied directly to specific knowledge just as much as it is tied to skill.

But is it worth it? To somebody familiar with the genre, quite possibly. Despite my trepidation at learning another set of items, I still find myself queueing up for a quick game to explore new gods, because even if their outfits point towards a culture of ingrained sexism, the powers and interactions are compellingly equalized. But for a newcomer? It’s a bit more complicated. Smite wants to help them to succeed, but I’m not sure it ultimately knows how.