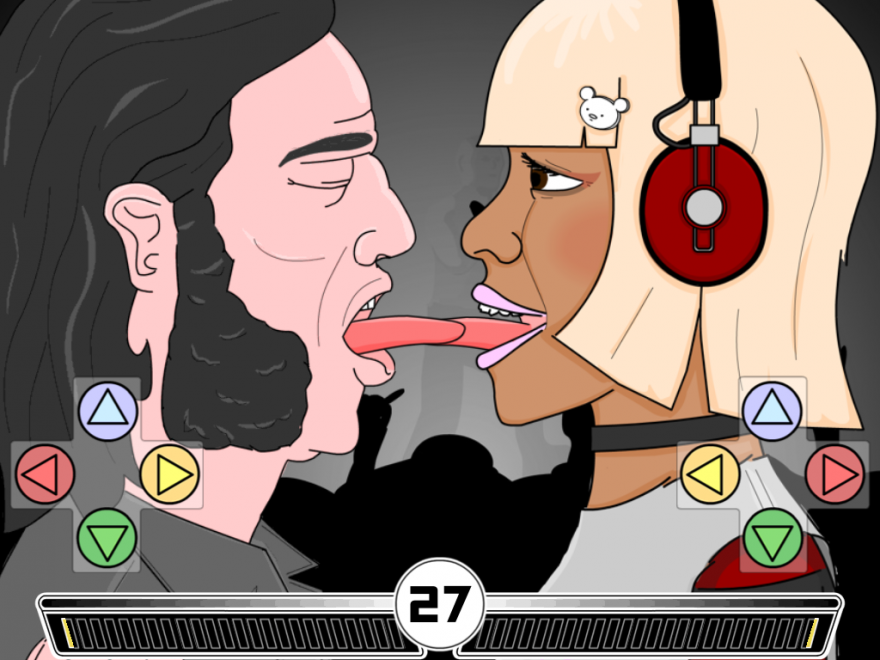 What was your first kiss like? Most likely, that question inspires a bashful grin to creep onto your face, as you remember a confused tangle of tongues and mouth-juice. There’s a universality to embarrassing kisses, though the stories are as varied and unique as snowflakes.

Smooth Operator, a co-op kissing game described as “weird” by its own creators (Beardo Games), will bring the universality and diversity of awkward lip-locking to touch-screen devices. Releasing in July for iOS (and sometime later for Android), Smooth Operator uses gesture-based mechanics to judge your smooching capabilities. For each round (or make-out session, if you will,) you and a co-op kisser choose an avatar from a heterogeneous group of characters, drawn up by artist Miles Nielsen. Then the good part comes. You enter into a battle of the tongues, your fleshy pink mouth organs sensually gripping the other, contorting in a dance of saliva.

“Isn’t this exactly how everybody kisses?”

While the exact methods may vary, Chris isn’t wrong at all. Kissing is pretty gross, when you take a step back to think about it. No matter who you are or who your partner is, no one is exempt from the vulgar reality of licking the inside of a person’s mouth hole.

That’s why Beardo Games made a concerted effort to represent huge swaths of the human population through their characters: because, in the eyes of the make-out session, we’re all weirdos no matter your size, shape, color, or age.

“This world is full of many different people with different preferences,” Miles says. “Everyone deserves to have fun and be awkward. With that said, though, there is one combination of character we thought too unholy to allow in the game: brothers Mutton and Spaz. We do not condone this combination.”

Though the game started as a quick Ludum Dare jam entry, Miles says the idea was “too ridiculous to not refine and expand further.” In the latest version of Smooth Operator, the team only aims to heighten the close quartered awkwardness of the experience. And, as producer Kate Thomas point out, “bringing it to mobile as a two player game means players will be forced to squeeze onto the same device.”

Chris tells me, enthused, that the new focus on gesture-based gameplay “means even more uncomfortable closeness to the person you’re playing with!” They’re even introducing certain complex gestures that translate into “super moves”—my fingers are crossed for the ability to tie your partner’s tongue into a knot. “The finger to finger contact adds so many layers of intimate awkwardness.”

Players can choose from an array of appropriate make out locations, too, like: a Laundromat, a creepy black van, a pizzeria. You know, all the romantic stuff. After all is said and done, your saliva-swapping skills are judged by a compatibility score. “We thought a lot about how to deliver the score,” Kate says, “and decided it would be really creepy if there was a character actually evaluating your kissing.”

“some folks can’t even look at the game”

Creepy it is. An all-knowing, bearded Guru man lifts up his many arms after your synchronized tongue dancing, to indicate the acceptability of your performance. According to Miles, the character was inspired by a trippy cult leader from the ’70s. Chris says a cult leader felt right and appropriate because “who else is more qualified to judge the compatibility of two people who have just been slobbering all over each other?”

On the other hand, some people were so taken with the game—like a fellow presenter at SXSW, for example—that it literally stopped them in their tracks. “We’ve been overwhelmed by the amount of positive reactions we’ve seen too,” says Chris. Funnily enough, game developers appear to be Smooth Operator’s prime audience, their first reactions usually being: I need my character in this game and making out with all these characters. A few cross-overs are already planned, including the character Struggles from Super Comboman and the adorable TOMCAT from MidBoss’s forthcoming Read Only Memories.

Since Smooth Operator doesn’t look like any other game (a prerequisite for all of Beardo Games’ work), people seem naturally drawn to it visually. But its visual diversity is more than just different-looking. It sets the right mood, for players to revel in the weirdness of making out and humanity itself.

“The way we’ve enabled the choices is really light and fluid,” Kate says. “People just chose and have fun without feeling like they’re being given a lecture on inclusivity. And, because of that, a lot of people end up selecting characters they think look interesting that don’t reflect themselves or their preferences at all.”

Its a noble cause that, according Beardo Games, is probably best tackled with the most crass methods possible.

You can lock lips with Smooth Operator this July on iOS, or Android some time later.