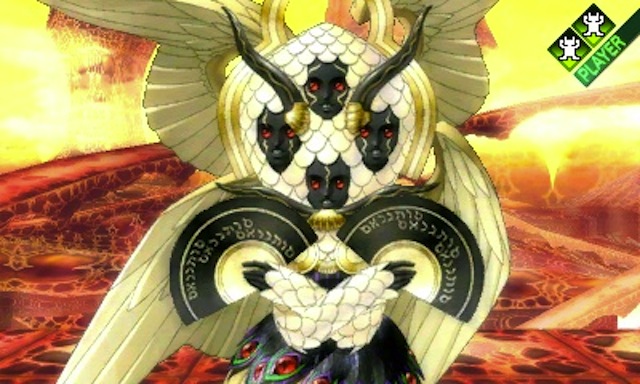 I’d been waiting for the sequel to Shin Megami Tensei: Nocturne for so long that I wasn’t sure if I wanted it anymore. These days, I’m older, busier, and more easily distracted. On the other hand, Shin Megami Tensei 4 hasn’t changed. It’s still a drawn-out, solitary affair—one to be enjoyed, endured, and occasionally dozed off to. With fifty to a hundred-and-fifty hours (yes, really) worth of digital dice rolls and bumming spare change from pixies, you’ll be dealing with little devils for a good long while. You can play for a solid afternoon and not really get anywhere. Marathon it, without sleep, and you’d finish in, oh, maybe a week.

Not all games that are long are too damn long.

The takeaway here is length. SMT4 is a veritable feast. If the prospect of playing a 3DS game for a hundred hours in this age of disposable mobile apps makes you do a double take, I feel your pain. As Jamin once mused, games are too damn long. Us adults have stuff to do. Between kids, school, and evening-shifts bagging alfalfa sprouts at the organic grocery co-op, who has time to role-play as a samurai/demon-summoner in a Tokyo deadlocked in an eternal garbage strike? Your time is better served sniffing the odours of some richer cultural bloom. Why sink an overwhelming amount of daylight in one game that slowly unfolds in the slightest of permutations, when you can complete five?

Well, because SMT4 is fantastic. All games that are too damn long are necessarily long, but not all games that are long are too damn long. You may be incredulous, and understandably so, considering it’s very much a classic RPG, complete with turn-based battles, grinding, and other terminology the Western world has all but forgotten. To tell you the truth, I wasn’t sure if I still had it in me. But let us not forget that Nocturne was as close as you could get to ambrosia in random-battle format (and not just because it let you flirt with demiurges either).

Unlike that game, SMT4 gets off to a slow start with an hour’s worth of ham-fisted anime garbage. You’re introduced to three fellow knights-in-training and a feminine AI who resides in your armband, all desperately devoid of personality. But Shin Megami Tensei was never about character development. It’s about demon manipulation. It’s about getting buddy-buddy with the game’s sprawling ensemble of supernatural beings, convincing them to tag along, then cashing them in with a “demon fusion” the moment you no longer want/need/love them. This is what you ultimately care about in SMT: that the angel and the Hindu deity you’ve picked up can be centrifuged into the Japanese god of cats, with the added benefit that the god of cats inherits the angel and the Hindu deity’s abilities. It’s stat porn at its finest.

Atlus is, of course, aware of this and so they have included a stat porno mag of sorts. At 176 pages, it’s a tome by game companion reading material standards. Less intended as a walkthrough than as an introduction to role-playing numerology, the paperback is chock full of maps on where to find loot in Shibuya; charts on the weaknesses of fairies who live in a subway terminal; the stat boosts of handguns; and, crucially, the details of what happens when a frog princess’s spirit is mixed with that of a mythic half-deer/half-fish. (A: Ares the Greek god is born.) It’s fragmented, nihilistic, and lacks any definite underlying philosophy. Now that’s what I call postmodernist.

As I flip from cover to cover through the book, a few things occur to me. a) This game is a ridiculous time-sink. b.) Its length is probably its biggest asset. c) This is a nice book. To me, playing Shin Megami Tensei 4 is like reading a long brilliant novel. (Okay, so it’s closer to the Bible in duration. But, still.) By that I mean, both SMT and solid long-reads know how to set the pace. Because it takes place over many moons, you’d expect for it to be thrown out with the fish. That it doesn’t get dull is a small miracle. That it gets progressively better is a big one. The key is that it’s breezy instead of longwinded; significant to a point, but trivial enough that you can drop it mid-sentence.

From the literary side of things, here’s a small taste of The Savage Detectives, a novel of some repute and thickness by the late great Roberto Bolaño:

The books Arturo Belano were carrying were:

Cent mille milliards de poèmes, by Raymond Queneau. (The Qeneau was a photocopy, and the way it had been folded, in addition to the wear and tear of too much handling, had turned it into a kind of startled paper flower, its petals splayed toward the four points of the compass.)

In its own garrulous way, SMT4 reminds me of Bolaño’s prose. They both masterfully execute on drawing you in with the conveniently forgettable. Bolaño does this with over forty narrators given to excessive chattiness; far more minor characters than you can keep tally of; and now and then by listing the names of every extant Latin American poet. SMT4 does it with stats upon stats on top of more stats. It does it with things like Ice: Drain, Dark Resist, Vermin races, Chaos alignments, Posumudi spells, 750 Macca, and +2 Mudo. It does it with over four-hundred curt demons that you raise from pups and then wash your hands of, because after all they’re demons, and because they have good trade-in value at the demon dealership.

Occasionally, someone will ask me if they should read The Savage Detectives. I always respond in the positive. It’s a great book, I say, like reading the diaries of a nymphomaniac and several unknown poets. I admit this is an unsatisfactory answer, but it’s what I tell them. It’s the same thing with Shin Megami Tensei. I usually just tell them that I like talking to the demons, that they have character, that they will insult you, trick you, growl at you, give you life stones, and have semi-mystical seizures as they whisper sweet nothings in your ear. What more can I say? It flows, focuses the facilities, and fascinates; and it’s all pretty inconsequential.