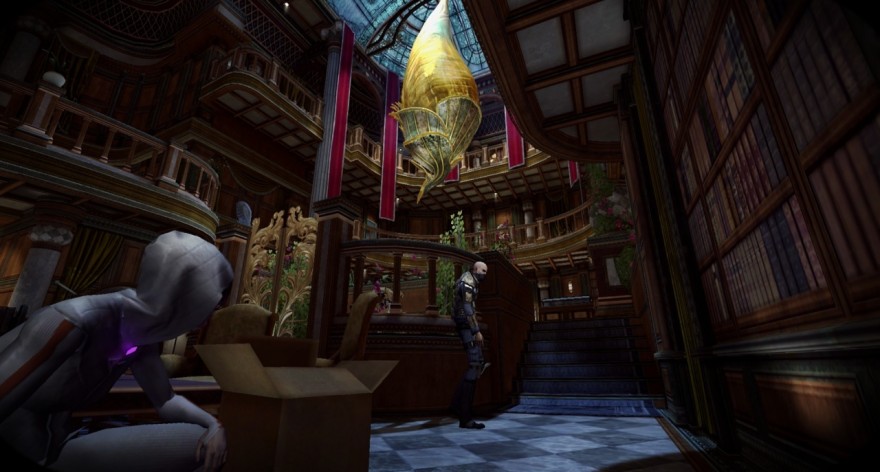 Republique is a game that knows me. It knows that I’ve read almost every novel listed as contraband. It tells me it’s burned my beloved Animal Farm, Naked Lunch, Brave New World, and of course, Fahrenheit 451. It knows that I’ve taken many of them to heart. By invoking their names, the game is attempting to further implicate me in its world. But it does not realize that I’ve already done all the work for them. I am already primed to help my protagonist Hope escape. The feeling that the game has seen your bookshelves, your thoughts, grows even more disconcerting when you remember that Republique is a game about surveillance, about seeing and knowing, about the power of gazing. The player is never controlling Hope, but merely guiding her, giving direction and viewing through the security cameras. And so it’s even stranger for me to have to take up the tools of the oppressor.

But the world of Republique is getting larger—it’s changing. Episode One was about going forward. Enter a room, navigate towards the objective. Even though the cameras provided depth and dimension to each space there was still linearity to it all. It’s no coincidence that Episode One was subtitled Exordium, the Latin for “beginning” and rhetorically the part of discourse where the speaker sets the stage, establishes credibility, and introduces the characters. Episode Two is called Metamorphosis, and it certainly delivers on that premise.

It differs from its predecessor in important ways: I got to know Republique. Or, more precisely, I became better acquainted with the facility cryptically named Metamorphosis. I also witnessed the conflict between its Father Comstock/Andrew Ryan-esque founder, the Overseer, and its (secretly dissident) man in charge of instructing their youth, the Librarian, who rings of Federico Lorca and Jorge Luis Borges.

It’s not simply that more information is available about these people, though that is true; it’s how the game divulges the information. The game demands that you learn the perhaps-fabricated history of the Overseer. It demands that you learn about his political idols. But none of these feel like demands. They’re dressed as puzzles which draw you further into Metamorphosis, always with the sense that there is something more going on, that there is a layer which the game refuses to allow you to access. There is a wonderful tension between the almost all-seeing power of the player’s gaze as they try to guide Hope through the level and their total lack of knowledge of the world before their eyes.

By doing this, players are able to familiarize themselves with the Librarian and the Overseer, characters Hope is already familiar with, long before they’ve encountered either character. They’re met by way of scanned text and audio logs that seem built into the very fabric of walls. It sketches them, colors them in, and at last, renders them in three dimensions. Not only do their reputations precede them—so, too, do their deeds. These audio files, letters, emails, lectures, and historical notes are more than a prelude to a more fully fleshed out character, they are the auditory lens that the camera does not always have access to.

There’s tension between the all-seeing player eye and its inability to peel back the layers of Hope.

However, somewhat lost in the shuffle are computer wiz and secret dissident Cooper and, oddly, Hope, the one the player is supposed to guide to freedom. Cooper still calls in to give you direction and drop objective markers but it’s no surprise that he chooses to take more of a backseat after he proves himself the lesser caretaker at the end of Episode One. Though the camera follows her, Hope seems disinterested in allowing the player to learn who it is exactly that the Prizrak were going to “erase” before the player intervenes. Perhaps it could be because this is “the one where we learn about the other characters” and “the one with the big, main character reveal” will come later. Unsurprisingly, the game maintains a stranglehold on what the player is allowed to know, and this creates a tension between the all-seeing player eye and its inability to peel back the layers of Hope.

This is exacerbated because Episode Two puts you in essentially one space for almost its entirety. With the exception of a few puzzles, almost all of the episode takes place in the massive library Episode One urged you to find. However, the landscape of the of room, too, is a in metamorphosis. Guards may become immune to certain items, they vary their patrol paths, and as you progress there are often entire patrol shifts. The space is changing also, becoming different than it might be remembered before a key item was found. This also means that there is often more than one way to reach an objective. As patrol patterns change, player tactics should change to accommodate them. All of this seeks to complicate a relationship that was established in Episode One. Of that, it does a good job. However, as the stakes are raised and more characters are brought in, it feels odd that while Republique itself is being brilliantly filled and characterized, Hope remains relatively obscure to the player.

This is the beautiful thing about episodic games: they can change. They can become other things and about other people. It’s certainly no coincidence that the stakes are raised and some of the tactics that once worked are now less effective in the episode titled “Metamorphosis.” Like The Walking Dead, Republique is now freed of needing to instruct the player of their goals and how to achieve them. It is, instead, refocusing its efforts, in wonderfully surprising ways.