When you begin Watch Dogs, you’re hit with how the city of Chicago is teeming with people in ways we’re unaccustomed to in gaming. These aren’t the ignorable faceless masses shuffling around huge cities, or dodging your poor driving, that have become status quo for open world games. Thanks to the all-seeing profiler in your phone, every NPC is fleshed out with a name, an age, a career, a salary, and an attribute in a way that makes them recognizably human—whether they’re cancer survivors or truck drivers, Cthulhu lovers or in-law dreading spouses. People in the virtual world of Watch Dogs feel like actual people who matter, who feel like glimpses into a richer, fuller life.

It’s a welcome attitude not just for a videogame—a medium often dependent on dispatching lives in volumes that render life meaningless—but one built around surveillance culture. That’s because in the real world, those who peer into our keyholes—emails, search histories, phone calls—have a tendency to forget the personal in personal data. A person’s life becomes all about the information it can yield, as was the case with Edward Snowden’s revelation that the National Security Agency (NSA) bulk seized data in numbers that can’t help but turn individuals into just another statistic, another drop in an ocean of info to draw on. Watch Dogs suggests that access to the digital details of a person’s day-to-day doesn’t mean you should forget they’re people, as opposed to 1s and 0s to be used for whatever end. This is an admirable counter-message to surveillance culture’s tendencies.

Information stops being an insightful, humanizing privilege, but something to be exploited.

Sadly, that counter-message lingers but a brief, glimmering moment. With time, Watch Dogs proves to not criticize the mentality of those who have access to our data, but to enable, encourage, and reward that mentality. Information stops being an insightful, humanizing privilege, but something to be exploited. Your ungoverned access to people’s privacy—phones, laptops—and city infrastructure is not presented as a responsibility, but an opportunity. One you can seize with no more than the push of a button and are continually rewarded for, so that the game becomes less about people, and entirely about what people can (unknowingly) give you. The very mentality behind the NSA bulk collecting half a million email address books in a day, or gaining all of Verizon Communication’s phone metadata, or using the PRISM program to analyze our Google, Facebook, and Apple activity. The game never encourages you to think about whether you should hack the neverending supply of people and opportunities around you. It just ensures that if you do, something useful will be given to you.

So you push a button, lit up conveniently beneath words like “Hack” or “Intrude,” over and over again. And every time you’re rewarded with something. Not just skills or trophies. A text with someone’s innermost thoughts. A subway full of people to control at your whim. A laptop camera that peers into a living room. A bank account belonging to a person with two mortgages that yields you money to buy cars, weapons, and energy drinks. An exploding steam pipe that tears through concrete to wipe out those pesky cops chasing you, along with any innocent bystanders nearby. All things that provide you—at the expense of the everyday people of Chicago—with something useful. You are, to borrow Edward Snowden’s words regarding the NSA, imbued with powers that work “to their own ends … extend their capability at the expense of the freedom of all publics.”

Sure, you can choose not to exercise that power in Watch Dogs. You can put your phone away while you’re walking the city streets. You can elect to not hack that laptop camera or bank account. In a making-of-feature, lead writer Kevin Shortt imagines players deciding to only rob the bank accounts of rich people, not poor ones. It’s a belief either enviously naïve that players wouldn’t take advantage of every opportunity Watch Dogs’ fundamental mechanics offer, or oblivious to the game he—and Ubisoft—made, which neither requires, nor encourages, that kind of moral choice making. After all, this is the game that wants to give you a trophy for completing side missions labeled “Privacy Invasion” and offer you server rooms full of glowing “Hack” buttons that reveal videos taken in the privacy of people’s homes. It lets you share power equal to the NSA—which include, according to Snowden, the ability to target anyone’s communications at any time, and get it by any means possible—with no punishment. So why not use that power? And so you do. Again and again. 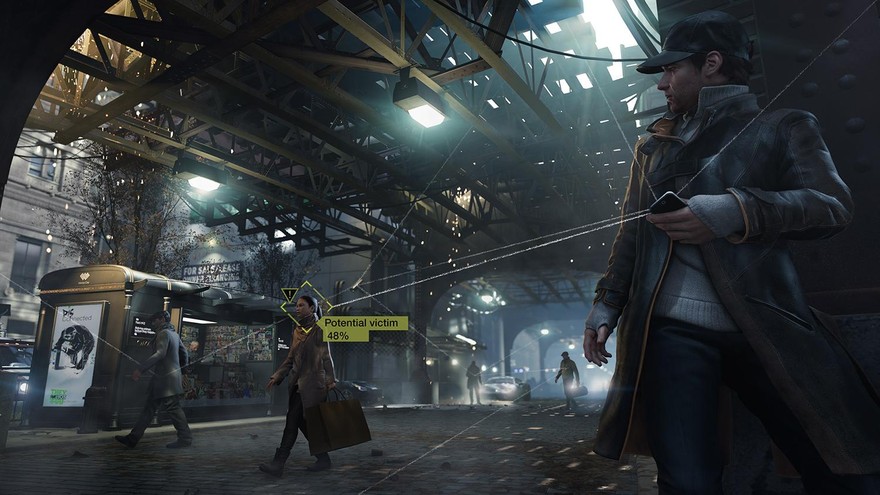 The result is the more that you play, the less people matter. Not just because they are reduced to little more than actionable items, but the steady stream of personal information constantly popping up on your screen that once made you see flesh-and-blood people becomes noise that you filter out and then just eventually ignore. Something that’s even streamlined by Watch Dogs with a skill tree upgrade that lets your profiler highlight only high-quality targets (read: the people who yield the most useful stuff).

Watch Dogs becomes a game where you fall into unconsciously adopting the exact attitude we fear from overreaching government agencies who can easily peer into our lives. People become a means to an end (a means you barely register in pursuit of that end), and the game continually justifies that end. Like the NSA, Watch Dogs argues its anti-heroes’ methods are justifiable, because hey, it’s all for the greater good. After all, with his access, Aiden is putting away serial killers, mob bosses, drug lords, and gangsters, like a more vengeful, murderous, asshole hacker version of Batman. He’s saving lives. Preventing crimes. So what if he takes a little detour into a cancer patient’s bank savings or peers through a camera at an anxious mother standing outside a bathroom as her daughter has her first period? You’re incentivized and justified to play like the NSA: use whatever means necessary as long as you stop crimes and achieve what needs to be achieved. It’s a logic that recalls something else Snowden said about the agency he blew the whistle on: “it believes on the grounds of self-certification” that it serves a justified greater good.

You stop considering the impact your actions have on (literally) an entire city. The people don’t even factor. Which we expect from a Grand Theft Auto, but not a game about surveillance culture, let alone one that starts out leading us to believe every person matters. That the people in Chicago are just like us. That its point-of-view is better than the NSA’s.

In that moment the city, though terrified, once again felt full of life, full of fleshed-out human beings. Not data.

In the climactic sequence of Watch Dogs, Aiden blacks out all of Chicago in pursuit of killing his final target. A satellite is hacked and directed at the city. A button is pushed. Then eerie darkness falls. Lights in offices and apartments snuff out. For a moment it feels like the virtual city is holding its breath. Then come the panicked and scared voices, like a physical thing wrapping itself around me. Recognizable and human. I felt like I was waking up from forgetting how once Watch Dogs made me acutely aware that people were really people here. In that moment the city, though terrified, once again felt full of life, full of fleshed-out human beings. Not data. Not opportunities. Not buttons to push. It was a moment that returned the game to something humanistic and great.

But then Watch Dogs wanted me to find a speedboat, steal it, and drive off to go kill my nemesis; leave all those scared voices behind me in the dark because they were no longer of use to me. And I couldn’t help but imagine that moment in the real world—imagine those who control our surveillance culture turning their backs on our voices and emotions, overlooking us in pursuit of the things they deem more important. It’s not a world I’d imagine many people wanting to live in, and yet it’s the very world Watch Dogs wants us to play in.