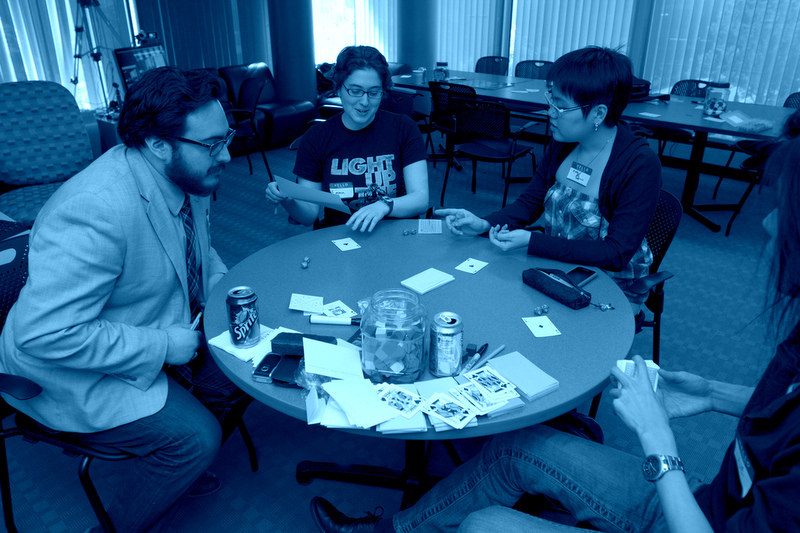 Last Saturday, in what I imagine to be a small computer lab in Cambridge at M.I.T., the daylong QUILTBAG game jam was happening. A good number of queer jammers showed up to make queer games. For me, this raised a couple of questions. One, what exactly is a queer game? And, two, what do they have to do with the tote your grandma uses to carry fabric around in?

Let’s tackle the easy and, okay, facetious question first. QUILTBAG is an eloquent acronym used within the LGBTQ community to cover the full spectrum of the human sexual identity. (According to the Queer Dictionary, it stands for Queer/Questioning, Undecided, Intersex, Lesbian, Transgender/Transsexual, Bisexual, Allied/Asexual, Gay/Genderqueer.) And yes, that’s the easy one.

“I’ve been to game jams with people yelling out ‘fag.’”

For a clear explanation of what a queer game consists of, that requires some verbosity. But the jist of it is that they can help everyone, regardless of sexuality, feel at home with the expressive digital medium known as videogames. Loosely speaking, queer games are typically made by queer people (though not necessarily) and deal with queer themes, such as putting up with bigotry and biases, looking at sexual identity issues, and fitting into a predominantly heterosexual society.

To give you an idea, this year’s submissions include a game where you play as a bouncer at a gay bar tasked with keeping out trans people; a card game with the subtitle Duck Duck Gay; and a collaboration between Zoë Quinn and Christine Love, two of gaming’s outspoken authors.

“You get different answers,” says Zoë, best known for her game Depression Quest, an interactive piece of nonfiction from earlier this year. “But for me, a queer game is usually, like, a game where it’s not a straight, white male doing things.” They also tend to be heavy on personal stories, though the player isn’t thrust into specific gender roles. “We’ve kind of been invisible for a long time,” she says, so you’re not going to find a queer game that forces you to be Gordon Freeman.

According to Zoë, inclusivity is what it’s all about. The jam’s organizers want to create a welcome scene for LGBTQ people who may be leery of getting involved for fear of harassment. “I’ve been to game jams with people yelling out fag,” she says. “A lot of people are uncool with that but it still happens.” There’s plenty of stigmatic residue from the dark ages of sexuality, and while the cover story in this month’s Time is “Gay Marriage Already Won,” the queer game designer has not. “The fact is, when I go to game events, it’s not uncommon for me to be the only woman in the room,” she says, “so I can guarantee I’m the only queer woman in the room.”

“I was not ready to talk about it. I wasn’t ready to have it be public.”

Personally, Zoë found that coming out as a queer in the indie game world, an experience she referred to as being “outed,” can be really nerve-wracking. “Someone did a little digging and found some minor thing. I got worried. I was not ready for it. I was not ready to talk about it. I wasn’t ready to have it be public,” she says. “It’s this whole aspect of my life I wanted to not deal with.” Since then, she’s embraced it.

Does Zoë feel like an outsider in the gaming community? Not especially, though she does get her fair share of gross comments. Then, there are minor things. “A lot of women will be friendly and affectionate before they know, and then they get weirded out. People won’t hug you, stuff like that.” However, she’s quick to point out, in that regard, others in the LGBTQ community, namely the Ts, have a much tougher time of it than her.

That’s why there’s a queer game jam and queer games, to open the door for more people to play and create. “I can say, ‘Hey, there are people like that here. Come join us and we’ll watch each other’s back,” Zoë says. And thought the invite is directed at queer folks, don’t call it separatist. “My end goal is to not need to exist. For it to be a ‘Duh’ thing. Something that is redundant and unnecessary,” she says. “We’re not there yet.”