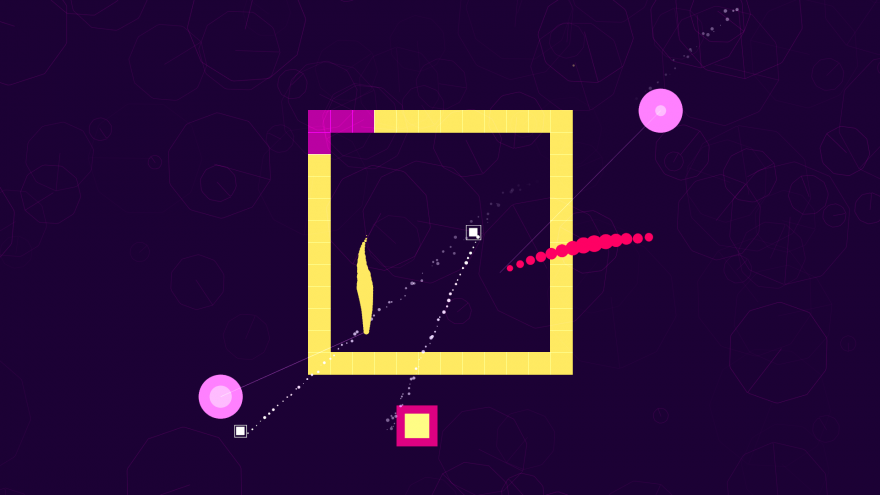 According to a new post over on the PlayStation Blog, bullet-dodging puzzle game Soft Body will be releasing on May 17th for both PlayStation 4 and Windows, with PS Vita and Mac versions to follow soon after. It’s also got a new trailer to go along with the announcement, as well as a sneak preview of some of the game’s levels from creator Zeke Virant, during which he discusses how the game’s soft presentation works together with its nonetheless hard challenges.


For the uninitiated, Soft Body is about controlling two “beautiful, gooey” snakes in tandem with each other, all while trying to dodge gunfire and “paint” various light panels into existence to build a new, blocky world. It’s a coordination-heavy setup, which Virant describes as something of a mix between the color-changing confusion of Ikaruga (2001) and the short but intense obstacles courses of Super Meat Boy (2010). “Soft Body’s levels encourage motion,” he writes. “Fast and slow, hectic or careful.” At the same time, the environment is serene and meditative, inviting players to endure its challenges with sometimes colorful, sometimes eerie art styles, and almost always an ethereal string of distant musical notes. As a previous trailer explained, this is more “bullet heaven” than bullet hell. But, I mean, it’s still bullets, and they still hurt.

This duality of conflict versus comfort becomes apparent in “Way of Life,” a level in which the player’s snakes Voltron together to form a single body. The map is chock full of deadly obstacles, with a spinning turret that never stops firing bullets, a sniper turret that always shoots directly at the player, and electronic floor traps that explode if the player stays on them for too long. It encourages on-the-fly puzzle solving, but it also takes place in an easy-to-read and nostalgic wireframe environment reminiscent of Asteroids (1979), just one of the game’s many ever-changing art styles.

The ironically named “Hard Game” levels, meanwhile, put players in control of both snakes at once, and if either is destroyed, both lose. There’s a level called “Quoting Ourselves,” in which both snakes must work together to save each other from bullets that one is invulnerable to but the other is not, and a level called Inside Circles, in which one snake must rescue the other from a bullet-prison before they can solve the puzzle. Both are bright levels, featuring vibrant pinks, blues, and yellows, and all are accompanied by ambient soundtracks that should be familiar to fans of NPR’s Echoes program.

“I want people to take tons of small risks,” writes Virant. “To push their luck, and to search for new approaches.” It’s not the first time a game has used its presentation to make classic arcade challenges feel more approachable, of course—Soft Body game has a distinctly Rez (2001) feel to it—but as we previously noted, its distinctly balletic style does stand in stark contrast to more conventional, testosterone-fueled shooter games like Gears of War (2006). Both like bullets, but if Marcus Fenix is someone you might share a Monster energy drink with, then the snakes from Soft Body are more likely to offer to a very special kind of brownie instead.

Soft Body releases for PC and PlayStation 4 on May 17th. To see more, including full playthroughs of more levels, visit its official website.