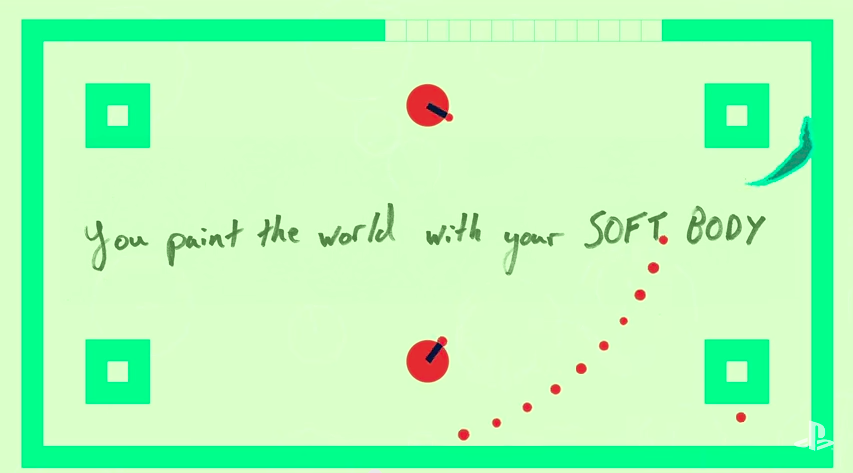 How many videogames could just as easily be Bon Iver or Sigur Rós music videos? Ten percent? Fifteen?

In the spirit of that question, here is the trailer for Soft Body, which, in addition to being the fashion thinkpiece term of art for yours truly, is apparently “an action-puzzle game set in a meditative, musical world”:

Soft Body is what happens when bits of every arcade game you have ever loved escape the zoo and join forces to form a chilly synth-pop band. Snakes slither around a series of abstract obstacles, no longer constrained by the hard boxes of early cellphone games. Who knows to whence are they slithering? They’re just feeling it maaaaaaan.

Fair enough. Soft Body is an inverted game: the snake does not seek to free itself through gameplay, but rather creates barriers and constraints as it navigates the gameworld. “You paint the world with your SOFT BODY,” explains the teaser trailer, which makes free play sound a bit more slippery than it should.

The idea is nevertheless appealing. To an extent, all gameplay is the act of building the universe you want to inhabit. Soft Body is simply more explicit about this. As such, if its trailer appears to be more of a music video, that is a feature and not a bug. Soft Body encourages you to “meditate in bullet heaven,” which sounds less pleasant than it looks. Wandering through abstract universes as synth-y music thrums is meditation; Soft Body will turn it into gameplay.

Soft Body will be heading to PC, PlayStation 4, and PlayStation Vita this fall. Find out more about Soft Body on its website.