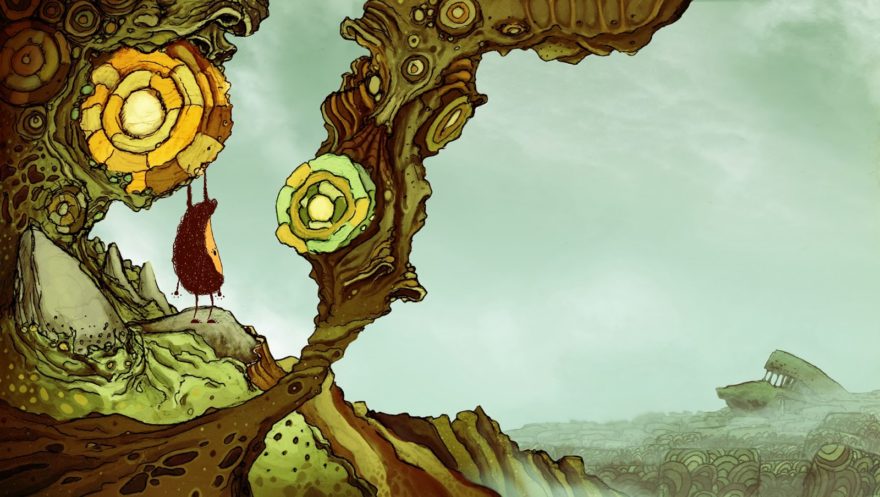 What is the art that sticks with us as children? Is it the pleasant ones? The ones that are comforting and safe? Or are they the strange ones? The ones that first expose us to to a world beyond the pre-approved bubble of sanctioned entertainment? In a time when getting media to everyone—including children—is easier than ever, Danish artist Malte Burup took the opportunity to craft an interactive children’s book that could be both challenging and entertaining. Titled Sofus and the Moonmachine, his storybook is a chance to deliver a quality app for children without compromising his vision for a living, breathing, biomechanical world that could spark that strange curiosity within them.

children’s books are more daring than stories for adults

Sofus and the Moonmachine is a story that takes place on a forested planet inspired by artists like Sweden’s John Bauer, and Australia’s Shaun Tan. Sofus lives on this planet, building things out of fallen scrap metal from the Moonmachine, an orbiting mechanical planet that lights up to become the Sunmachine, which sustains the plant life on Sofus’s planet. One day however, the Moonmachine breaks down and Sofus takes it upon himself to build a rocket so that he can travel to the machine planet and fix it.


This combination of natural organics and functional machinery was partly inspired by the works of H.R. Giger in the Alien series, and it shows most prominently on scenes that take place on the Moonmachine. Nature and machine are visual themes that run through Sofus and the Moonmachine, evoking the works of Hiro Isono (Secrets of Mana) and Adolf Lachman (Machinarium). The latter being a kindred artist to Burup’s own personal style.

For Burup, children’s books are more daring than stories for adults. As he says, children’s books “can allow for more randomness and bizarre things to happen, without the children questioning it.” He also says “grown-ups tend to put everything into categories and become confused if something is off.” So, taking his inspirations, Burup’s Sofus and the Moonmachine presents a wonderfully weird world with engaging puzzles and charming rhymes to capture wild imaginations and deliver an enthralling book both children and adults can interact with.

You can download Sofus and the Moonmachine on the App Store for iOS. Also check out its website for more info.