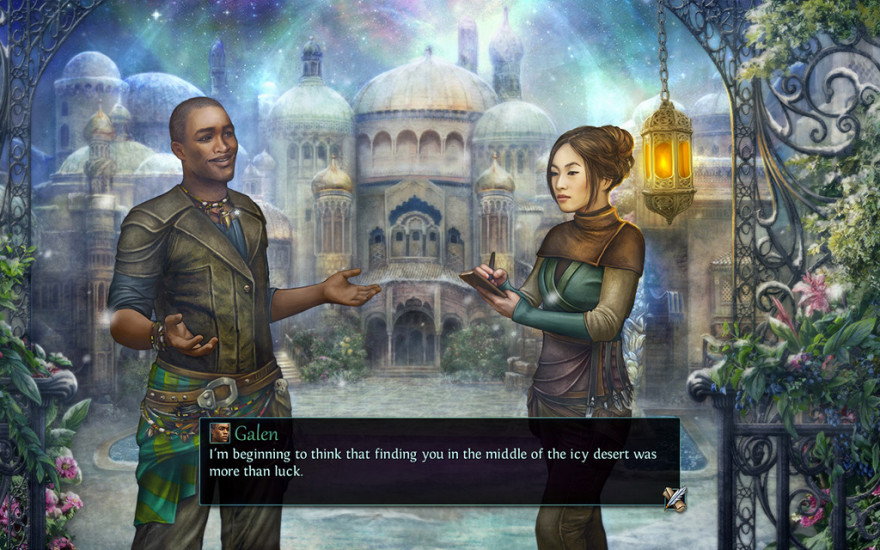 In the eighth episode of The X-Files, agents Fox Mulder and Dana Scully are dispatched to investigate radio silence at a science outpost in Icy Cape, Alaska. There they discover a parasite—because it’s always a parasite—that makes its host hyper-violent. Suspicion and fear threaten to tear the team apart as they search for answers. In the knick of time because it’s always in the knick of time—reason and rationality prevail, temporarily giving order to the chaos and showing our protagonists a way forward in their eternal search for the truth.

Solstice similarly follows the first-person accounts of Galen, a doctor, and Yani, an engineer, both outsiders sent to investigate a city during its three months of weather-induced isolation. Constructed on the site of unusual hot springs through a combination of magic and engineering, this “Jewel of the North” serves as a trading oasis in a desert of snow for the rich merchant families who control it. After Lev, a neurotic archeologist obsessed with the mysteries surrounding the city and phenomena that sustain it, disappears, a series of betrayals and mechanical failures lead Galen and Yani deeper into a conspiracy that threatens to undermine the city and its few remaining inhabitants.

Early on, one of the game’s characters says, “Insanity is hardly rare in this city. The rest of us are just better at hiding it.” The line serves as a sort of mantra for Solstice, a Chinatown (1974) inspired visual novel whose homely interiors and warm colors mask a city fraught with tragedy. Instead of extraterrestrial parasites there are only flawed human beings and the damaged psychologies that motivate them. The creators stress that there’s no evil in Solstice, only circumstances.

If the setup sounds cliché, it’s also extremely practical, serving as a more than capable vehicle for creating tension that the player must then navigate through various dialogue choices. Hubert Sobecki and Agnieszka Mulak wrote the game together, a collaboration significant for how it gives Galen and Yani an equal sense of independence and unpredictability. Rather than blank-slate to be role-played, each comes with a unique personality and history that isn’t so much managed by the player over the course of the game as uncovered.

As professional problem solvers, Galen and Yani offer different modes for exploring these circumstances, one more mystical, the other more technical, each with their own agendas and motivations. Whereas games like Mass Effect (2007) encourage you to imprint your own personality or made-up character onto the protagonist, Solstice lets you come to understand its heroes by seeing how they react. The interplay of text, image, and sound is limited to mostly static scenes peppered with animated character gestures that resemble something you might find in a Reading Rainbow segment. In this way Solstice relies on the player to make it dynamic.

I don’t like conflict. It makes me nervous and uncomfortable. I’ve never been in a fight and I’m easily shaken. While I don’t keep a tidy apartment and my car is a mess, I try to manage any emotional chaos in my life like an IKEA bedroom, maintaining an orderly appearance by shoving everything else into a cornucopia of bins, drawers, cabinets, and closets. Solstice resisted this urge, forcing me to come to terms with its characters and contradictions, no matter how much I tried to reconcile them.

The more I tried to make Galen act judiciously, the more his relationships to other characters faltered, hurting his investigation. Every time I tried to tone down Yani’s indignant righteousness, arguments only escalated. In Solstice’s case, friction like this tends to feel liberating rather than frustrating. Messy relationships become wellsprings of new information and insight. Conflicts and disagreements, it turns out, can be productive in their own way.

There’s a tendency in many RPGs with branching stories for the min-maxing of levels and loot to infect character interactions. Conversations become just another data point to be managed with the game scoring your results according to strict, artificial moral binaries. Even when there aren’t “best outcomes,” concern over lost quests or potential party members can make these encounters feel more transactional than narrative.

Intentionally or not, Solstice hints at this subtext in the way it economically and politically orients its characters toward one another. Istvan is the oligarch who employs everyone, making the inhabitants of the game’s city less like citizens than they are indentured servants. They are less a community in the traditional sense than a corporation whose office politics remain constrained by the explicit hierarchy on which it is based.

Having laid the groundwork for interrogating this dynamic, however, Solstice tends more toward murder mystery dinner theater than fantasy film noir. A penchant for playful melodrama and comedic banter in many ways undercuts the tension established through the game’s mystery and its interactive methods for unraveling it. That the characters always seem to stay uncannily true to themselves, no matter where the player nudges the story, is a virtue. That this truth doesn’t always feel as weighty as the circumstances creating it is not. In this way, the process of untangling Solstice’s many secrets and deceits often outpaces its results.