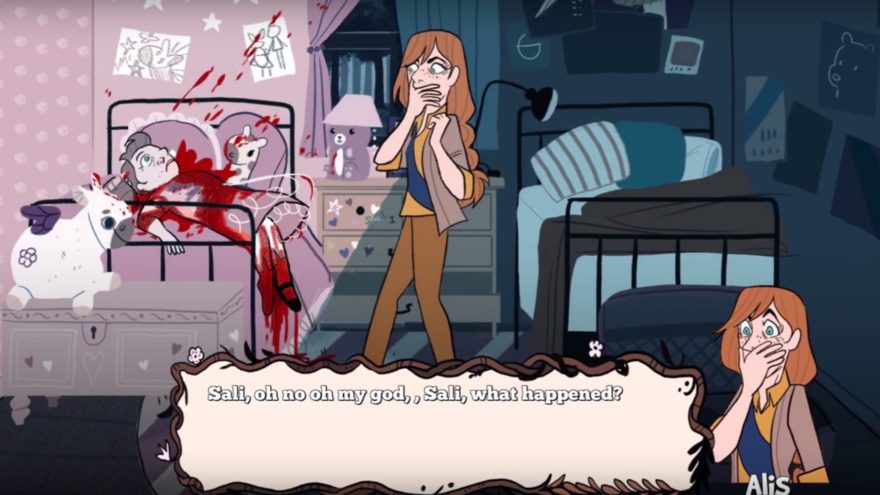 You know that uncomfortable feeling of being outdone by someone much younger than you? If you’re not familiar, prepare to get acquainted with it: meet Interfectorem, a visual novel made by a team of four girls aged 11-15 years old.

Interfectorem tells the story of 16-year-old Alis, whose seven-year-old sister, Sali, is brutally murdered after the mysterious disappearance of their parents the year before. Sheriff-in-training Alis swears to track down her sister’s killer and wreak well-deserved vengeance. Helping the girls out on the project was director and programmer Andrew Dang, artist Reimena Yee, and musician Jon Peros.

A smart blend of horror and humor

Interfectorem’s impressive young designers were participants in a Girls Make Games camp in San Francisco, CA. As I recently discussed, the world of videogames can be a difficult place for women and girls. Girls Make Games is determined to address that gender disparity. With help from their growing list of partners (including Google Play, Double Fine, and the Computer History Museum in Mountain View), Girls Make Games runs global summer camps, workshops, and game jams designed to inspire young women in middle and high school to become engineers, designers, and creators.


Their flagship program, a three-week game development summer camp run in 15 US cities, culminates in a ‘Demo Day’ competition in the Bay Area between the top five development teams. The winning team receives a yearlong mentorship and the chance to have their game professionally produced and published through Girls Make Game’s parent educational company, LearnDistrict.

In July 2015, the four girls brought Interfectorem to the second annual Demo Day at the Computer History Museum, where it won the Grand Prize. A smart blend of horror and humor (“think Nancy Drew meets Shaun of the Dead”), Interfectorem went on to raise over $12,000 on Kickstarter.

Will you be able to solve Sali’s murder? Play Interfectorem here to find out.