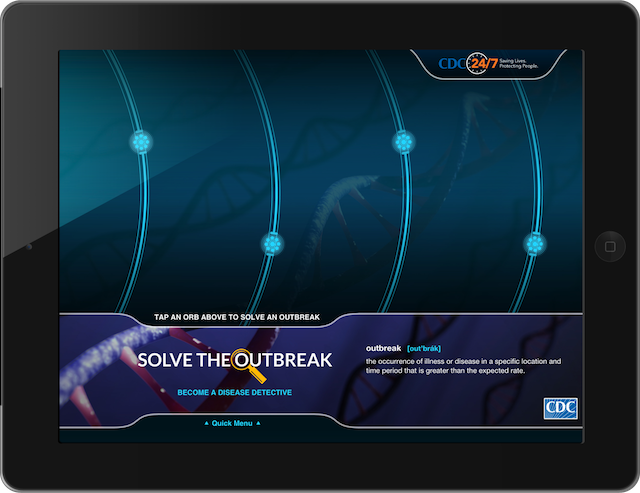 What could be more fun than disease puzzles?

Solve the Outbreak is a new (and free) iPad app/game that allows players to live out their Contagion or even Outbreak fantasies and play the part of a CDC disease detective, solving clues to get a sense of what nasty illness each scenario presents.

I’m going to admit this right now – I am a total sucker for this stuff. Playing detective is fun, sure, and I enjoy games that let me play as a crime fighter as much as the next girl, but stick me in the role of a disease detective, and I am all about it. I used to be an EMT, and my partner is a doctor, so this may just be a weird personality quirk.

There’s something particularly empowering about the whole business of disease detection (in game form, Hollywood glory, or the real world). While the appeal of say, solving a murder is incredible (looking at you, LA Noire), playing disease detective lets you feel like you can solve a problem and keep it from getting worse. If you arrive to a murder scene, you’re already too late. But if you can keep an outbreak from spreading, well, congratulations, you’re a total hero.

Back to the game at hand – it’s lightweight at 3 missions, but comes bearing the CDC stamp of approval, so playing it gives you the sense that you’re actually learning something valuable. Plus, it comes with one nasty (and unintentionally hilarious) scenario described expertly by NPR writer  Micheleen Doucleff.

My favorite puzzle was “Birthday Party Gone Bad,” which starts off with this scenario: “What is the worst thing that can happen at a 5-year-old’s birthday party? Sticky fingers? Fights in the bouncy house? … Usually, but after this party, these things would have been a welcome side effect.”

Kids went home with stomach cramps and watery diarrhea. Was it the homemade ice cream or an unmentionable accident in the pool?

Disgusting – and utterly fascinating. That’s medicine in a nutshell, I suppose.

As the “games for social change and education” movement grows and matures, I expect to see more baby steps in the right direction. Solve the Outbreak is engrossing, features slick production values and has solid educational value – putting it near the top of the heap.