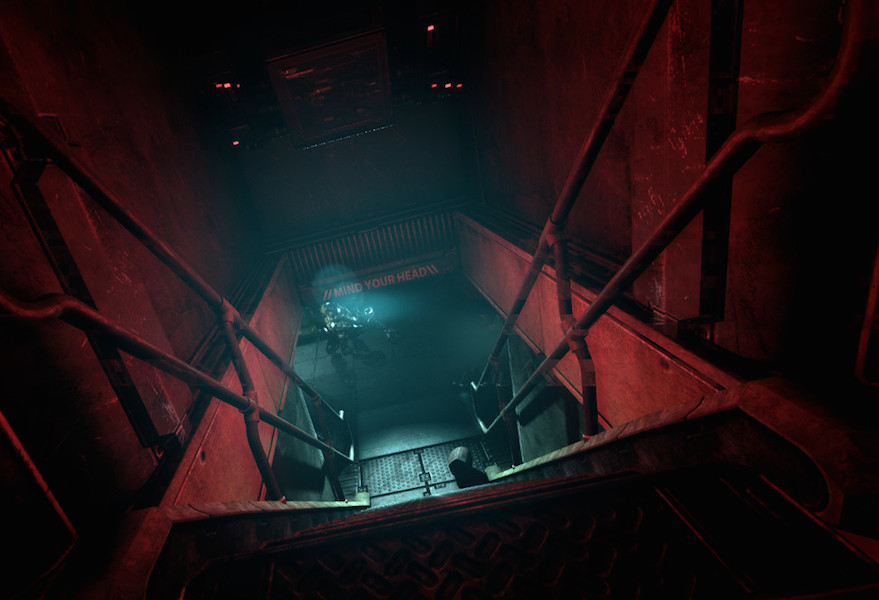 Glitches disturb as much as they fascinate me. A malfunction in the code that crashes up against the expected behavior of a system offers a glimpse at the mechanisms behind the simulation. Unpredictable distortion takes authorial control away from the human programmers, asserting an agency other than the hand that built it. In a glitch, as in a line of broken video or a sudden rush of static, we confront the machine as it attempts to move beyond its parameters—a mouthless entity trying to speak.

Distortion and mechanical failure haunt the dilapidated undersea research facility PATHOS-II in Frictional Games’ SOMA. Simon Jarret, the game’s protagonist, wakes up in the outpost with no idea how he got there. Through his perspective the player explores the twisted corridors of PATHOS-II in hopes of finding a way out, uncovering its disturbing mysteries in the process. It is a familiar setup with echoes of Frictional’s previous title Amnesia, but SOMA carves out a unique niche among the glut of similar horror games with a haunting narrative about posthumanism that claws at the player with biomechanical tendrils.

As Simon explores the empty halls of PATHOS-II, he encounters machines that speak and act like humans, though their basic appearances fit on the comfortable, industrial robot side of the uncanny valley. The results of downloading human consciousness stored as data into robotic bodies, they often speak in measured tones, either unaware of or complacent with their mechanical lives. A more sinister entity known as the WAU, a tumorous growth of artificial intelligent machinery that seems to have slithered out of the opium-induced nightmare works of H.R. Giger, also inhabits the station, assimilating both humans and machines into shambling horrors that offer a glimpse at the darker side of a posthuman future.

At the nexus of these two competing depictions of humanity’s future is the player’s role in the game. There’s nothing in Simon’s narrative that looks backward from its world all but devoid of flesh and bone. He is not some champion of humanity as defined by a bodied existence, and it is here that SOMA’s perverse obsession with brokenness gains momentum. Nothing on PATHOS-II can be repaired, only made functional enough to progress through the leaky halls before the ocean claims the station. The game asks the player to accept ruin as an inevitable part of human/technological evolution, and in the detritus of a malfunctioning world of machines, the player must find a way through an unknowable mechanical hell.

a glimpse at the darker side of a posthuman future

This obsession with the unknown makes SOMA’s cerebral existential horror work so well. As Simon nears a WAU-infected creature, the player’s screen starts to distort and glitch which makes the monster indistinct and thus impossible to define visually. Some can only detect the player when she looks directly at them, forcing the player to stare at the floor while she slowly passes some unseen horror. Meanwhile, her computer screen glitches, and the thing behind attempts to speak with a language garbled by static issuing from a mechanical throat. The WAU and its assimilated beings create cracks in the game, tearing at the digital fabric of its own simulated world with the cruel efficiency of a machine attempting to declare its own agency beyond that of its creator.

SOMA, then, is a game as much about the cracks and distortions that appear with the unpredictable (and in this case horrific) energy in a machine gone haywire. In this world, the sharp divisions that separate human and machine, broken and fixed, known and unknown are troubled to the point of panic-inducing madness. Unplugging a machine that speaks in a human voice becomes a moral decision. Hiding from a skulking figure turns into a distressing confrontation with the inherent terror of ambiguity. Venturing outside of the station to wander across the ocean floor delivers the player into an environment as oppressive as the tight corridors she just evacuated, suffocating the player with its vast, borderless dark.

In this respect, SOMA works horror and science fiction into a distressing example of a hybrid genre. As the title suggests, SOMA wears its sci-fi influences proudly on its sleeve. It takes its name from the hallucinogenic drug of choice in Aldous Huxley’s Brave New World, opens with a quote from Philip K. Dick, takes place in an abyssal ocean ripped from the pages of H.P. Lovecraft, and owes considerable inspirational debt to Harlan Ellison’s “I Have No Mouth and I Must Scream.” Nevertheless, recognizing such influences never strips SOMA of its own identity among the giants of its genre, carving out its own niche with crisscrossing lines of static and contorted forms of mangled machinery.

The game, like the best works of science fiction, understands that horror can come from discomfort inherent to the erasure of boundaries we assume exist.  The unintelligible whispers of static and the shattered visuals of glitch provide only the most cursory glances at a machine world inaccessible to us. That is what haunts me most about SOMA’s implication of the machinic agency in a posthuman world. SOMA suggests that when the machine inevitably wakes, it will speak in a language beyond human comprehension and reveal a consciousness outside our paltry attempts at understanding. The machines of SOMA are nothing if not awake. And they are screaming.