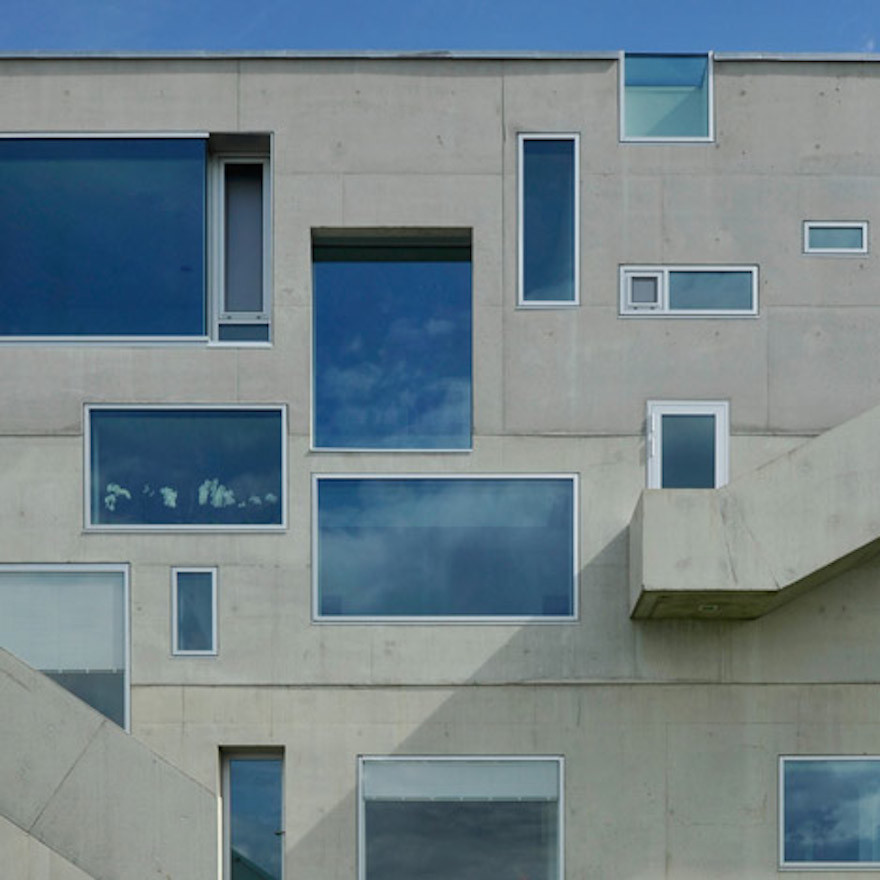 There’s a house down the street from me that doesn’t make sense. I live in a totally normal neighborhood in Chicago—lotta old Ukrainian people, plus a bar with tattooed dudes who like hockey—but someone just uprooted a full corner and plopped this enormous obsidian mansion in the middle of it. The weird thing is, it looks great; I don’t think anyone minds its meticulously tended little stone gardens and tastefully tinted windows. The other day I saw the dude who lives there emerge to take out his trash, and it was as God decreed: tailored, soft-purple button-up, gray slacks, dense but well-manicured stubble. I’m sure his name was Darren and he occasionally “throws on” one of his old Yo La Tengo t-shirts.

I imagine that Darren also lives in this Norwegian palace, by architects Carl-Viggo Hølmebakk AS Arkitektkontor. Dubbed “Concrete House” by its creators, it’s an intentionally labyrinthine creation: “The kind where children can explore the many staircases, rooms and hallways, and where there is enough space for teeming life to unfold.” It’s dense, full of shapes and cantilevered platforms and corners upon corners. Which sounds all well and good when you and your handsome dinner guests are peering at each other across this epic expanse:

But wait: what’s up this stairway? That expanse of daylight up there couldn’t hide anything menacing. Let’s give it a look.

And then you’re in this glass bathroom and you can’t tell if you’re inside or outside of it, or why your reflection is suddenly slightly handsomer than you remember yourself being. But heavens, what a sky! You could stay here forever, you tell yourself.

Eventually you step on a veranda, trying to figure out a way back down. The stairway you came up now heads straight into an underground swimming pool. And where did everyone go? Who is that in the window far away? When did your put on a soft-purple button-up?

Days later, you jump for it. You’ve seen too much—too little, perhaps. As you sprint over the foothills, desperate to talk to a human that you’re sure is actually there, you take one last look back and see—what is that? The soft-purple shirt, the perfect stubble, but your eyes—it’s you, staring out of every window, barely moving but alive. You see a second you emerge in the bottom window alone—just for a moment, and then the sun glimmers on the perfect glass, and it’s gone.