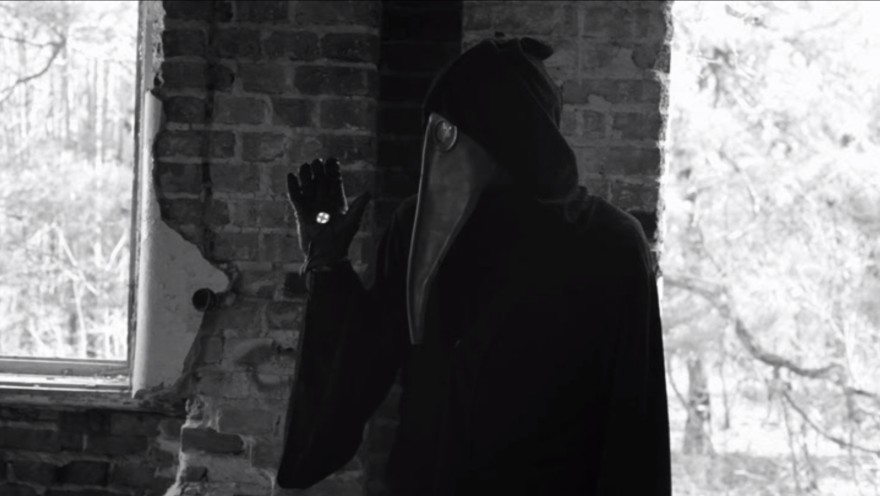 It’s important to appreciate the spoopiest month of the year by scouring the internet for what it does best: telling you horrifying stories that freak you the fuck out. From creepy pasta to Slender Man, you might as well think of the internet as the ultimate crowd-sourced nightmare fuel. And now we have a new addition to the group: the distressingly cryptic video puzzle sent to Johny from GadgetZZ.com this past week.

Here’s what we know so far: a CD-ROM was sent from Poland to the Swedish website with a seemingly meaningless set of numbers hand written on it. After looking at the actual contents of the CD, however, it became clear that those numbers might actually be the key to solving one of the internet’s creepiest and toughest mystery challenges to date. The video burned onto the CD depicts a cloaked figure hovering near the shadows of an abandoned building wearing a Pathologic-esque mask used by doctors during the black plague. The figure sends several cryptic messages throughout the video using various methods like morse code, odd body movements, and video distortions.

While it only took the Internet 13 minutes to solve the decades old mystery of an old woman’s coded language, this video is still mystifying amateur sleuths on forums everywhere. Unsurprisingly, the most promising leads are coming out of the Reddit forum (which actually originated a month, ago when the video was first posted to YouTube with the description “Are you listening?”).

Several amateur Internet P.I.s have taken to running the video through a spectrogram, which turned up an image declaring that “you are already dead,” as well as a number of other disturbing images of women being horribly tortured (NSFW, obviously, though many are speculating that the images come from different horror movies). One person decrypted a set of numbers only to reveal the letters: “REDLIPSLIFETENTH,” which is most likely an anagram for “KILL THE PRESIDENT.” This particular theory is supported by the fact that other codes translate to the exact coordinates of the White House.

While some jaded sleuths speculate that this exceptionally well-crafted puzzle is little more than a marketing ploy, others claim it is a student project from the original YouTube poster, Parker Wright. Certainly, the puzzle strikes the perfect balance of disturbing yet alluring enough to capture the internet’s obsession (at least for a little while.) But more than just razzle dazzle, the videotape found on the 11B-X-1371 CD-ROM seems most convincingly to be part of a well thought out alternate reality game. The feverish hunt on Reddit reads like the perfect game feedback loop: find clue, toil for answer, broadcast answer, vote to top; repeat. Even the pacing of how information is being discovered feels purposefully designed, perhaps hinting at some mastermind who both a) knows how to make a damn good puzzle, and b) loves the shit out of Halloween and scaring the bejesus out of people.