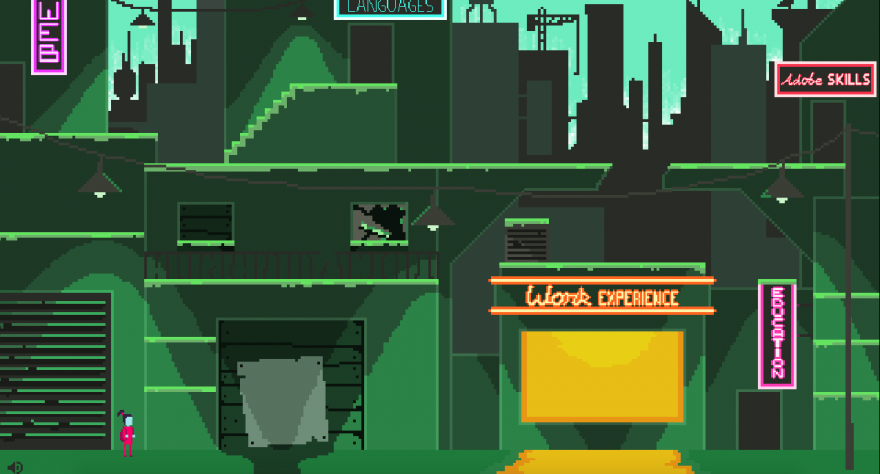 This is a story about a cheeky gambit that, by virtue of our covering it can only be said to have succeeded. So much for the journalist as a neutral force. But it’s a good, cheeky gambit, so let’s not get too bogged down in the observer effect.

Seth van Heijster has created an interactive resume that is also a game, but is basically a really cool resume. In his platformer, imaginatively named Interactive CV, your character runs and jumps around a streetscape, unlocking details about Van Heijster as you go.

the game itself means much more than its content.

Walk under a sign reading “education” and learn where he earned his BA and BSc. Shimmy up a drainpipe, jump across a series of platforms, and learn that Van Heijster speaks seven languages—some better than others. This is not the most navigable of resumes—if you want to skip from top to bottom, the traditional setup is still the way to go—but it is exponentially more memorable.

What is the takeaway here? At an obvious level, that you should remember the name Seth van Heijster, so mission accomplished. But more generally, Interactive CV might be understood as an argument against the traditional CV. The game itself—and not the various descriptive panels—offers the real proof of Van Heijster’s skills. While I have no reason to believe that any of the skills listed within the game are inaccurate, it would hardly matter if they were. Again, the existence of the game itself means much more than its content. If you follow that idea through to its most extreme point, what’s the point of a resume? Just go out and make something.

I don’t believe Interactive CV is going quite that far with its commentary. In fact, I’m not sure it’s much of a commentary on anything so much as it simply is a clever idea. Nevertheless, Interactive CV’s game-puzzle approach to employment recasts the whole process as something of a gauntlet. Jump here. Run there. Climb. Climb some more. The world of employment likely isn’t a hellscape for Van Heijster, but he has created a game that suggests it might generally be one.

You can check out Interactive CV on itch.io.