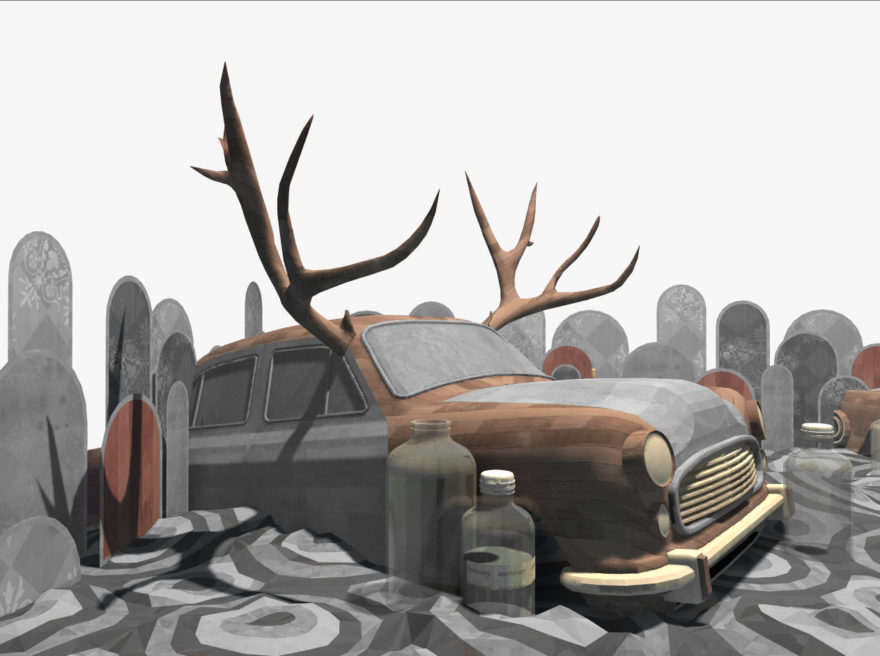 The two-person Studio Oleomingus has resumed work on Somewhere, their first person exploration game set in an alternative Colonial India. To demonstrate, they’ve given us a new peek at an environment in their surreal polygonal world.

The first screenshot shows off a car, maybe from the early ’60s, but made of wood paneling and with giant antlers poking out the top. The following slides feature several of the vehicles, clustered together like deer at a watering hole, but surrounded on four sides by walls, left without wheels and suspended in a floor that’s swamp-like but also vibrantly-patterned.

the archaeological process of memory

Oleomingus also uses a clever trick to pull aside the curtain behind their scene design somewhat—successive screenshots includes more visible technical details. The first screenshot is a purely presented scene, but the next several images contain wireframes and different lighting effects, and a wider view introduces an icon for an invisible sound source in the Unity development engine as well as the wireframe for the game camera through which other shots were taken.

Another set of screenshots shows the same cars (without antlers this time) crowded into a fountain-like structure, overlapping with one another and with columns coming up out of the water. Here, amid the broken columns topped with over-turned jars, the cars look less animal and more like natural refuse, like so much mud, gumming up the water works.

Accompanying these screenshots is a short bit of text that describes “the periscope city,” and a populace that is always looking—as through a periscope—one level above them. But, more than a description of the fantastical architecture of a city, the parable touches on the danger in this sort of neighborly anxiety: by always looking just above, the people of the periscope city doom themselves to digging ever downward. The post continues, “even in the periscope city, people do need to visit the basement. Where they might have stored that old collection of newspapers or those spare switches. And since they cannot see into this bottom-most chamber they are required to dig a room right below it… so the city continues ever downwards.”

The text sits alongside these images that present the points of view of other images in the same set, and Studio Oleomingus uses that juxtaposition to pose questions about how we create and present specific perspectives, and about the archaeological process of memory.

You can follow the development of Somewhere here. You can also play one of their demos—Rituals, Timruk, or Menagerie—on itch.io.