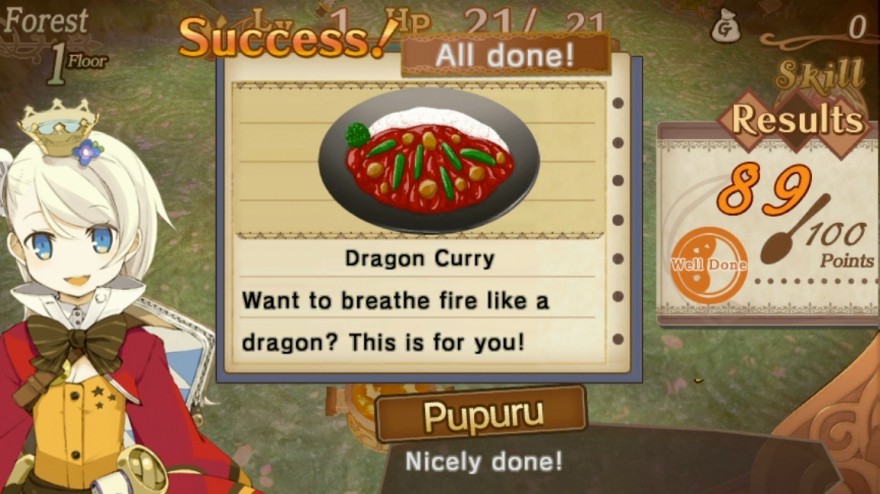 To be clear: I love Japanese games, as well as the fever dreams they give me after hours of exuberant playtime. And I wanted to enjoy Sorcery Saga. Let’s start with the premise, which is balls-out: Pupuru, a magic school dropout, scurries her way to the nearest town only to find that her favorite curry cafe is in danger of being swept up by the mean, corporate curry opposition next door. She sets out on a grand journey to find the sacred ingredients of a legendary curry recipe to save her friend’s establishment, and maybe meet the Great Curry God, or something.

I was genuinely concerned for the fate of this poor curry shop.

As ridiculous as the story might sound—it also features an enigmatic cast of magicians, demons, and a small Pikachu-esque companion that will literally eat your entire inventory—I was genuinely concerned for the fate of this poor curry shop. Pupuru loved that curry. It’s, like, the best. And, I wanted her to make the best curry for this guy, and along the way find herself, and maybe find love too—who knows, in this crazy world?

So it was with high hopes that I set out looting, crafting, and fighting my way through grids of randomly generated dungeons in search of these legendary ingredients. Death begets the loss of all items, money, and experience—the latter is always reset, regardless of level completion—sending me back to absolute ground zero. And I died a lot. The game is relentless.

All of which would be merely a challenge to complete were the means for completing it not so cumbersome. The combat is fun enough, but inventory management is a slog. Keeping everything on-hand is important, because crafting is important in a game like this, but it’s only possible through a rodent companion that needs to be “charged” in order to be used, thereby making its use sporadic.

Your inventory maxes out at thirty items, which you will fill within the first few floors of any dungeon. At that time, you will find yourself playing two games: the first, a relatively enjoyable roguelike, and the second, Backpack Saga: Curse of Unfun Item Management Rodent. Loot ranges from typical shields, potions, staves, swords, forks, cutting boards, pot lids, battle gems, rice, carrots, and everything in between. Eventually, I began ignoring chests because it was too bothersome to manage the influx. You can feed items to your rodent friend, but something inevitably ends up killing him, as you often have little idea what the item will do based on vague descriptors.

I’m all for putting time into my game—I’d spend up to an hour customizing the battle mechanics in Final Fantasy XII before heading into a boss fight, and watching my pre-programmed genius decimate the opposition. But in Sorcery Saga, any strategic crafting and assortment is lost upon death, and all efforts are void. And, again, you die a lot.

Monster traps lurk at every corner, which can easily destroy you in a few turns. On one hand, I liked starting from square one—it evened the playing field, and reminded me of challenging cartridges like Battletoads and Teenage Mutant Ninja Turtles, games that didn’t hold your hand, plagued with shoddy AI and glitchy coding, pitting unfair, cumbersome design against the player. You know, the good old days.

In Sorcery Saga, any strategic crafting and assortment is lost upon death.

At one point, I paid for an item at an in-dungeon shop, thinking, Alright, I have this great shield, now I’m set, only to have the shopkeeper yell, “Thief!” and chase after me, killing me instantly. This proved to be the rule rather than the exception: I could not progress, I would not have fun. I began to entertain the idea that maybe I just wasn’t good enough to play Sorcery Saga, that I had somehow turned off the road in life that allowed me to play such games.

In a sort of despondent, fugue state, not really knowing how I had killed some giant turtle boss, Sorcery Saga awarded me with a trophy proclaiming, “It wasn’t THAT hard.” The game itself taunted me; I could hear the developers laughing from behind the source code. I hiked up my trousers, sojourned forward, and continued to die a lot. I’ll do anything for a good curry.