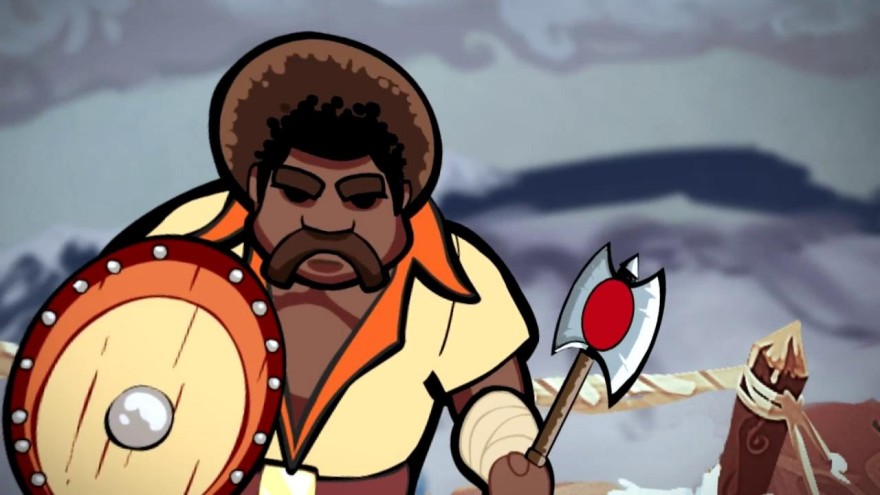 When I spoke to Crypt of the NecroDancer creator Ryan Clark, we settled upon a DO and DON’T of genre-hybridization. The DO was to use the hybrid as a solution to a design problem. The DON’T was to do it because it was cute. Combining two different kinds of games is perhaps the least effective route to an original concept—moreso if one of those two genres is “rhythm.” You can only hope for so much from a Pushmi-pullyu mutation of rhythm and roguelike, but Kim Swift gets the benefit of the doubt. Right? Creating Portal, she took the shooting out of first-person shooters, wildly redefining a settled genre. She made a shooter a puzzle game, she didn’t superglue one to the other. Couldn’t her team find the same wildfire originality in Soul Fjord, a high-fantasy disco-dungeon crawler?

This hero’s tale is of Magnus Jones, a blaxploitation Viking denied the eternal party of a fallen warrior. His name swiped off Club Valhalla’s list, Magnus is kicked to the curb at the bottom of the tree of life, now having to clobber trolls and lounge dragons to get back up.

This doesn’t ever feel rewarding.

It’s a very college poster-fair gag, with a wavering screen tear that nods to grindhouse pastiche, and a narrator fresh off the cop show beat to bard Magnus’ journey up the arbour. But poking fun at outdated celluloid at this point feels, well, outdated. Unlike games such as Blood Dragon, which homes in on a goofy cinematic pastiche that we see similarly lampooned by Miami Connection and Everything is Terrible, Fjord isn’t even breaching the threshold of style swipes we’ve seen a decade ago. Car stripes, ankle-length fur coats, puffy hats, campiness, jive. Remember when they brought Starsky and Hutch to big screens? 2004? Fjord’s style laurels depend strictly on the giggles you’ll have over it being “so zany” to swing swords with a Ziggy Stardust bolt on you in a land of shag carpet. You could otherwise just wait for a Brady Bunch Skyrim mod.

But worse art directions have survived by solid design. Which Soul Fjord isn’t really getting down with either.

Loot, slay, trade, die. The roguelike pieces are all here, but to sidestep out of the mold Soul Fjord features rhythmic combat, each class of weapon with two differently timed combos to nail. You keep tabs on the tempo with an awkward looking bar that hovers just below Magnus’ foot, the combination popping every time you attack. Nail it and you do good damage; flunk and you’ll flail to start anew.

This doesn’t ever feel rewarding. Just as strange as it is that Swift worked on this, so is it that Austin Wintory, who had no problem harmonizing his compositions in Journey to the state of play, contributed something so forgettable. Wintory’s funk music is barely noticeable. It’s repetitive and vague, reminiscent more of the faux-elevator music in Space Station Silicon Valley than Sly and the Family Stone. The effect on the combat is that it never clicks—you’re never moving to the beat so much as some shapeless guidelines. You’re bashing to the beat of no drummer.

The Ouya is the ideal turf for hammering out concepts, but Soul Fjord doesn’t feel like a clever work from some very clever people. With a weak gimmick, it hinges on decent animation and your stomach for goofiness, which I know is a passionate demographic out there, but they still have better options (Airtight’s previous game, Quantum Conundrum, for one). Though technical, games are more than just equations. Just forging interesting things—barbarians, badasses, roguelikes and rhythm—doesn’t make the sum any funkier.