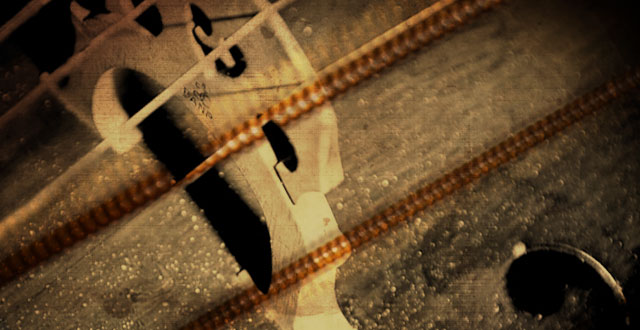 No melodies, and no themes: That was the edict passed down from the designers of Dead Space to composer Jason Graves. For Graves, a self-avowed “big melody man,” this was a bit of a challenge. “I’m a John Williams, Jerry Goldsmith, Tchaikovsky kind of guy,” Graves told Nick Cowen of The Telegraph UK. “That’s the stuff that I love to do. If I think of something in a major key, then musically that’s where I’m the happiest.” That said, anyone that braced themselves for a “surprise” Necromorph attack and still found themselves jumping away from the screen can testify to the success of Graves’ work.

In all interviews Graves has done about his Dead Space work, he’s quick to confess his inspiration. “Essentially 20th-century music is my bible,” he told Game Informer. “There’s all these techniques and effects that players can do. I had a shorthand list of experimental ideas that I then went and put in front of the orchestra.” While Graves doesn’t mention any names, there’s one particular musician whose influence on this work is undeniable: French composer Edgard Varèse.

Even if you’re not familiar with Varèse’s actual work, you’ve probably heard a famous quotation that’s been attributed to Varèse: “Music is organized sound.” In the 21st century, that notion seems to be so obvious that it doesn’t need to be verbalized. In both pop songs and symphonies, instruments are tasked to play a specific part that contributes to the piece as a whole. Even in improvised music, there’s an anchor, a repeating refrain or melodic phrase, that keeps these musical expeditions somewhat grounded. Where Varèse opened minds is with equating “music” and “sound”—that is, to suggest that music need not be traditionally musical, or melodic, in order to be considered music. It’s a notion, directly or indirectly, that’s inspired all types of popular music, everything from Sonic Youth’s detuned guitar attacks to Public Enemy’s percussive sample pastiches.

Where Varèse opened minds is with equating “music” and “sound”—that is, to suggest that music need not be traditionally musical, or melodic, in order to be considered music.

On a piece like the functionally named “The Necromorphs Attack” (available here for download, along with other examples of Graves’ work), Varèse’s influence is there in sound as well as spirit. The controlled chaos Graves summons often sounds like something that could have been pulled from the atonal movements in Varèse’s Amériques or Integrales. At their most aggressive, the strings tremble violently. At quieter volumes, they nauseously hover in the background, bringing to mind the broken gait of the Necromorphs themselves. Shrill woodwind blasts sound off as chimes and other types of percussion clatter and crash. “It was very free-associative,” Graves explained to The Telegraph UK. “We’d pick any random 5 notes and then play them as quick as we could. We threw any musical language we had out the window and went for textural, non-musical stuff that grabs you by the throat.”

At times, the orchestra acts like an additional foley artist, conjuring sounds that more resemble slowly bending metal and echoing abandoned hallways instead of wood and brass instruments. This was especially the case in the first Dead Space game, wherein the claustrophobic aspects of the USG Ishimura were reinforced by the shrill and aggressive music.

Other musical selections, like “Welcome to the Sprawl” from Dead Space 2, help describe the protagonist’s state of mind. It’s the piece that begins the game, as Isaac Clarke is being interrogated by a doctor. Visually, we see the background behind the doctor turn to black as images of the Marker, the Ishimura, and Isaac’s now-dead girlfriend Nicole flicker into view. Aurally, Graves starts with the first game’s “Nicole’s Theme”—the one piece of music where game designers made an exception to the “no theme” edict—and, as he described to Film Score Monthly, introduces a “dementia kind of motif that I have slowly bending up and down on a single note.” By the end of the scene, Isaac is being attacked by his horrific vision of Nicole as the orchestra descends upon the listener like an animal pouncing upon unsuspecting prey. And to think that such shock tactics have their root in the seemingly stodgy world of 20th-century classical music.