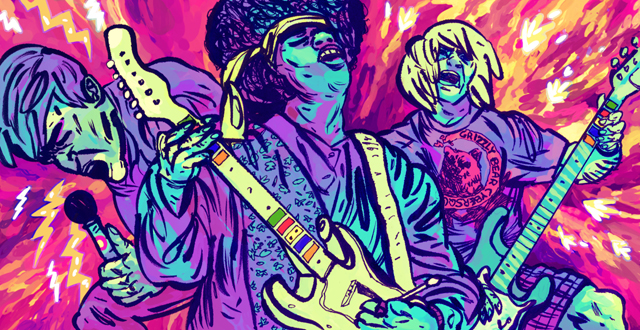 For most fans of independent music, Arcade Fire’s The Suburbs winning Album of the Year at this year’s Grammys seemed like the ultimate validation of the indie scene’s punk-rock-born ethos. Not only was the album released on a label (Merge Records) that has its own grassroots do-it-yourself success story to tell, but The Suburbs actually triumphed over indie music’s Strawmen Axis of Evil: pop music (Lady Gaga and Katy Perry), pop-country (Lady Antebellum), and hip-hop (Eminem). In a post-Napster paradigm that’s seen sales precipitously decline across the entire music industry, it’s the relatively meek world of “indie rock”—both in the form of bands like Arcade Fire and Vampire Weekend, and labels like Merge and Matador—that has seemingly inherited this corner of the world.

It’s a coup d’état in name only, however: while these groups proudly trumpet their No. 1 showings on the Billboard charts, it’s with sales numbers that are, at best, one-tenth those of other chart-toppers from previous eras. If anything, these successes are more indicative of loss-leader pricing strategies and other sorts of shell-game gimmicks to inflate sales figures. There’s something to be said for good old-fashioned indie ingenuity, though—by quickly embracing the gradual shift from brick-and-mortar CD retailers to online MP3 sales while simultaneously reinvigorating the presumably dead vinyl LP market, and by exploring the potential of social-networking tools, most indie outfits were able to weather this sea change. Couple that with a highly coveted brand identity—a notion, either implicit or implied, that the music matters first and foremost—and a bunch of old dinosaurs resistant to change; and when the dust settled, some of these scrappy, savvy Davids found themselves standing taller than the so-called Goliaths of their industry. You can argue whether the race was won, or whether there’s even a race, but there’s no mistaking that the playing field has been irrevocably changed.

It’s only fitting, then, that the world of music gaming experienced a similar paradigm shift, and that this shift was signaled by a dubious music industry tradition: the “contractual obligation” release. Unfortunately, Guitar Hero Encore: Rocks the 80s isn’t as spectacular a tossed-off sendoff as other notable music-world middle fingers, like Lou Reed’s Metal Machine Music or Van Morrison’s Bang Records recording session. Instead, it’s merely the gaming equivalent of a posthumous best-of compilation, or a poorly considered concert release (in the vein of the last two releases from the recently-reunited Soundgarden)—serviceable, but uninspired and ultimately disappointing.

Activision, being a multimedia conglomerate looking to make oodles of money, did what any self-respecting media conglomerate with a highly lucrative property does: it spat out a nominally new and improved copy of what worked previously. At first, the modifications made to Guitar Hero III: Legends of Rock seemed minor; there was a little more polish in the presentation, some serious product placement, and the seemingly unobtrusive presence of a few notable rock legends. Once you progressed further into the game, however, shit got silly: the momentum-killing boss battles to progress (and unlock) the next batch of songs, the “interpretation” of certain beloved tracks, and, of course, the absurd spike in difficulty level. Never mind that Dragonforce nonsense; as someone vaguely skilled at messing with a plastic guitar, the run of bullshit that kicks off GH3‘s version of “Holiday In Cambodia” was the sort of miracle mile that I never wanted to run. Activision needlessly turned a challenging yet enjoyable gaming/music emulation experience into the fake-music equivalent of Ninja Gaiden II. Of course, the game is the best-selling rhythm game to date, so they did something right. That “right,” however, might simply have been getting the game out on the market a few weeks before Harmonix could get Rock Band on shelves.

Now, it seems awfully silly to set up some sort of “major label”/“indie label” dichotomy between the Guitar Hero and Rock Band series. While Rock Band was nominally the smaller and riskier of the two (being a totally new franchise that demanded a greater monetary commitment from gamers right out of the gate), it was a product of MTV Games, a subsidiary of Viacom, a company that (to be glib) owns a whole lot of stuff. Harmonix was purchased by Viacom for $175 million, awarded a $300 million bonus as part of the acquisition terms, and sold back to shareholders of Harmonix for a paltry $200 million. In other words, we’re not talking about a local band making handmade sleeves for their debut single and touring coast-to-coast in a rental van. In terms of the Rock Band games themselves, however, that “indie” sense of creativity trumping commerce is all but palpable.

While Guitar Hero III doesn’t pretend to be anything more than a faceless rhythm-on-rails type of button pusher, Rock Band strove to offer something more. Multiple instruments were only the tip of the iceberg. From the outset, Harmonix wanted to create a gaming experience that was communal in every way imaginable. There’s the gameplay itself, which all but requires multiple people in order for the game’s potential to truly be unlocked. There’s also the downloadable-content component, an aspect of the game that Harmonix has supported since the initial release. There’s also the Rock Band Network, which allows any band with time on their hands and some semblance of programming know-how to upload their own music as a Rock Band-playable song. And since Rock Band couldn’t truly be “indie” without some shoot-for-the-moon idealism, there’s also the hope that Rock Band players will be inspired to pick up actual musical instruments and learn to play those as well.

From that point forward, everything that Guitar Hero did with its franchise was either a reaction to or a copy of something Rock Band successfully accomplished. The first Neversoft Guitar Hero game did also feature downloadable content, but it was more an afterthought at first, with initial offerings released irregularly. With Guitar Hero World Tour, Activision joined the multi-instrumental parade, and tried to sex up proceedings by offering players the chance to use avatars of famous rock starts, as well as including an in-game music-creation system. Of course, these addenda caused issues; the contrast between the cartoonish Guitar Hero avatars and the more realistic rock-star avatars was jarring, and the music-creation portion of the game proved to be both difficult and ineffectual. As an added bonus, the real-life avatars also lead to countless lawsuits levied by the actual performers.

At the same time, Activision wanted to break further ground in the “be a real rock star” experience by releasing band-centric versions of Guitar Hero, where folks can be their favorite member of Aerosmith or Van Halen or Metallica while playing through their songs (and the songs of nominally related artists). While Rock Band has also delved into band-centric games, it’s telling that its two have centered around a band whose influence transcends all popular music (The Beatles) and a group that, genre quibbling aside, is best described as a punk-rock band (Green Day).

While Guitar Hero III doesn’t pretend to be anything more than a faceless rhythm-on-rails type of button pusher, Rock Band strove to offer something more.

Any sort of tête-à-tête between these two franchises is now moot, however. After releasing nine Guitar Hero console games over the past four years (never mind portable or mobile versions, or the DJ Hero series), and citing both the recent economic downturn and the declining sales of rhythm games in general, Activision opted to stop production on any future Guitar Hero games in February 2011. What Activision neglects to mention is that it manufactured its own “Napster moment” by oversaturating the rhythm-game market with endless reiterations of the same old wheel. Instead of treating the Guitar Hero franchise with care and consideration, Activision wasted its creative and financial viability with alarming speed. Worse, by spitting out sequels and spin-offs as quickly as possible, it burned through the good will of its consumer base. Even if it were producing quality games by the time it cut bait on the Guitar Hero franchise, it’s doubtful those burned by previous knockoffs would bother coming back to find out. It didn’t help that there was a better, more “respectful” alternative available.

February also saw Harmonix lay off 15 percent of its workforce, after a prolonged battle over the company’s future post-Viacom. Despite these setbacks, though, Harmonix has stated that it’ll continue developing and supporting Rock Band, an undertaking that will no doubt be helped by the continued influx of content provided via the Rock Band Network. By valuing the quality of the gaming experience as much (if not more) than the bottom line, and by steadily growing and expanding its empire, Harmonix outlasted its much larger competitor, and finds itself all alone at the top of its industry.