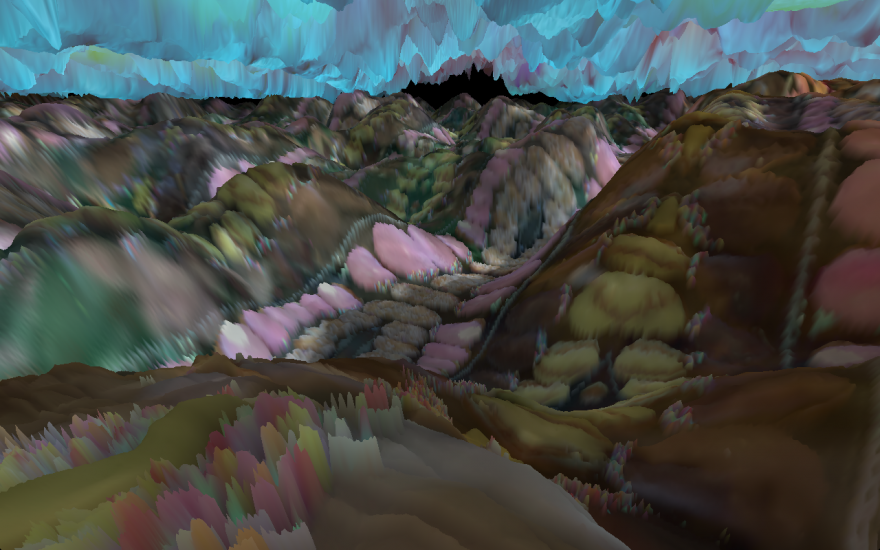 Editor’s note: An earlier version of this article misrepresented MacLarty’s motivations. It has been revised following a discussion with him.

Videogame designer Ian MacLarty recently took part in a game jam, as part of the Freeplay festival in Australia, that was themed upon diversity, multiplicity and culture. It was called, appropriately, the Multiplicity Jam.

MacLarty was inspired by the speakers at the festival, who talked about their own cultural identity and the value of diversity, to reflect on his relationship with his connection to Australia, where he has lived for the past decade, as well as his upbringing in South Africa. The result was an exploration game that he called Southbank Portrait (or Portrait of a Stranger).

To look at MacLarty’s virtual world without context you’d see only a jagged, garish blend of gullies and mountains that stretch on forever. There’s also a ceiling that clashes with the terrain below it either in its hue or by physically colliding through it. There’s a sense of discordance throughout that, through its fragmentation, seems to represent the turmoil of MacLarty’s introspection at the time.

With the word “Portrait” in the game’s title, MacLarty means to make reference to how he has assigned an anthropomorphism to the land, as if to engage it in conversation. He further realizes this idea by allowing a real location, one that he was surrounded by during the jam, to control how the lands are formed. “The landscapes in the game are generated from photos I took around Southbank (a business and shopping district in Melbourne),” MacLarty told me. “The red channel of the photos was used to generate a heightmap and the image was used as a texture.”

As you explore, rolling over the great ups-and-downs of the hills, every minute or so that you’re inside this strange 3D world the landscape shifts its shape. Different parts sink and rise so that it becomes impossible to see everything. It’s also very disorienting due to the lack of continuity. What this does, at least for me, is reflect how MacLarty is struggling to connect with the land around him as it, too, denies you any chance of forming a relationship with these virtual representations.

It’s not just the heightmap that changes either as the textures and sounds are completely refreshed into new ones. In one moment you might be rolling over a series of grass-like green hills to birdsong, and then it all shifts dramatically, leaving you in a drab grey of sharp angles and factory noise. The confusion is undeniable as you seem to seamlessly travel from one type of location to another. You become lost as these great volumes shed their skin around you as if a living, breathing creature aging over the years.