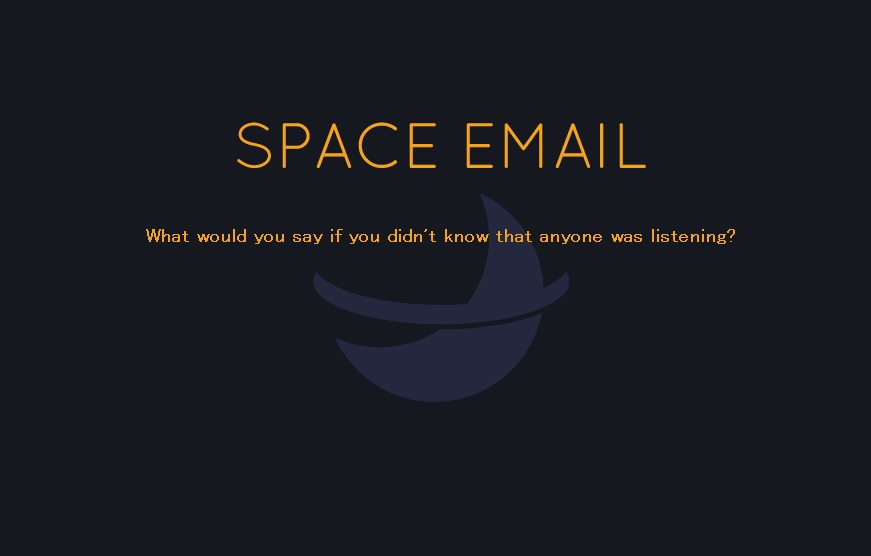 Space Email is a communications platform that asks a profound question: “What would you say if you didn’t know that anyone was listening?”

On one level, this question is entirely rhetorical befitting, say, a philosopher or a Terry Gilliam movie. On another it’s the basis of Space Email, which is essentially the digital age equivalent of pushing a message in a bottle out to sea to wash up on some distant shore.

Users can write whatever they want and send it into the Space Email database. They can also pull up the messages submitted to the database at random. They don’t know who wrote them (unless signed), and they aren’t able to respond to the sender. So it takes away all the responsibility that comes with composing electronic mail.

Shelby Smith hoped that Space Email would encourage people to explore themselves and larger, more poetic concepts when he released it in August 2013. That goal was met on occasion, but you were more likely to read a ridiculously detailed description of a missing horse, or a transcription of an episode of The Simpsons. The magic of these surprising and sometimes nonsensical messages was in their lack of context.

It was Space Email‘s propensity to deliver these absurd, shocking, and insightful series of messages, as well as its digestible and easy-to-share format, that saw it gain fast traction, especially on Tumblr. But had perhaps been a little naive and felt it necessary to take Space Email down after 16,416 messages in just two days.

“Users could post things without being responded to—sometimes, when they needed to be. I had no idea who was posting some saddening and seriously offensive messages. I also had less control over the database in the old version due to the way it was designed technically, so it was tricky to remove some of those messages that were harassing others. I couldn’t handle what had come out of it.”

Space Email did work as had hoped but it was open to abuse of many kinds, such as indirect bullying. So retreated for several months to work on improving the technical side of Space Email. The plan was to allow himself and its users more control over its content, and to improve the speed at which it ran (the unexpected popularity of Space Email meant some users were waiting 30 minutes for a single message to load).

With that work now behind him, has come out from hiding today to launch the new version of Space Email. It has many new features including a “Report” button to help manage the upsetting and hurtful messages better. There’s also a profanity filter to make the tasteless a little less so. Oh, and previous users of Space Email will be glad to hear that their old messages have been re-imported to the database.

While Space Email is completely free to use as before, users now have the option to purchase an account at a price of their choosing. This grants them access to additional features—it seems to be well worth the investment.

“They can opt to receive only messages sent in the last day / week / month so if they’re away for a while, they can see what they missed. Users can generate a share link to show a specific message to someone. They can select a color for their message on the inbox, so it draws more attention. They can also star messages, so they don’t slip back out into space.”

If those extra features aren’t attractive enough, then proposes that purchasing an account comes with the satisfaction of supporting Space Email and helping it to stick around a little longer.

Despite the re-release today, Space Email is still in active development, so if anyone has a feature they’d like to see added then they should drop a line. However, a more fitting way to request a change may be to write an outline and then send it into the database, hoping that he finds it.

You can play Space Email for free on its website.