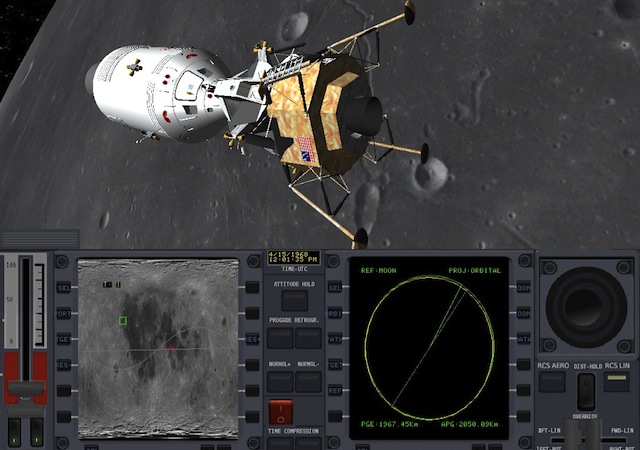 Here at Kill Screen, we love a good sim. And not just nominal sims like SimCity and, well, The Sims. We pine for the realistic sim, the kind where you’re placed inside the cockpit of a Boeing 747, or behind the wheel of a tractor trailer crossing eighteen hundred miles of hinterland. Matthew Shaer’s delve into the complexities of Airline Traffic Manager in Issue 0 is classic.

Also, most of us being children of the ‘80s, we’re nuts about space. That’s why we’re in awe and shock and amazement of this incredible-looking space sim Space Simulator (what else would it be called?) due out later this year for iPhone and Android!

Oh, Jiminy! Did you hear Neal Armstrong checking in with ground control? If that trailer alone doesn’t make your spirit inwardly leap with the exultation of an astronaut taking his first step into a weightless atmosphere, just wait till you hear what the developers Simvex have to say about it. Reading what their website has to say about it is even better than stumbling upon a dusty collection of National Geographics in the cellar.

According to the developer Simex’s boasting, the game will feature a functioning solar system, every planet in the cosmos from “Mercury to Makemake,” astroids, moons, the Edgeworth–Kuiper belt planets (something like a huge asteroid belt that exists in the region of the Solar System beyond the planets), 90377 Sedna, “gravitational slingshots to cut travel time,” fueled missions to Io, Europa, Ganymede, and Callisto, the classic Space Shuttle, Apollo missions, the N1 Russian project, futuristic ships, and test programs for automated deep space probes. Phew!

This is like the summer at Space Camp I never had! The only thing missing is the dehydrated ice cream.