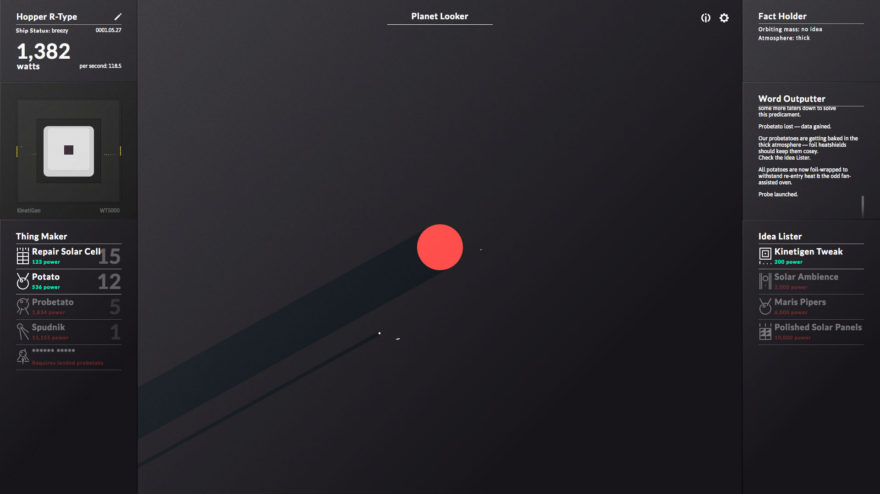 Jake Hollands’s Spaceplan starts with a blank screen, the controls of your space ship are damaged, and the only way to start it up is to click on the Kinetigen on the top left of your screen. I click, and every click gives me a single watt of power. Solar panels, I’m then informed, will cost 10 watts. Uh oh. It appears I’ve found myself a clicker.

This is a disaster. Clicker games have been my kryptonite since I left my computer powered up for six weeks in university to corner the cookie market in Cookie Clicker (2013), and when I did the same at work, years later, for Clicking Bad (2013).

“Watching orbital motion can be hypnotizing”

Be it no surprise that Hollands was inspired by his love for A Dark Room (2013) and Cookie Clicker when making this game. “I’ve wanted to explore games which feature quite ‘mundane’ gameplay as a vehicle to carry polished aesthetic and silly narrative for a while,” he said. “Also wanting to create a game which tries to look lovely only through graphic design elements—typography, UI, geometric shapes. It’s a scary task for a game, but one that the clicker genre is made for.”

In terms of aesthetics, Spaceplan nails what it’s going for. It’s one of the best-looking clicker titles I’ve seen. As you click on the Kinetigen to power up, you’ll also enable the damaged systems around your ship. Hollands is an artist first, and the user interface sings with his talent. You can see your ship orbiting a tiny planet, and each of the items you buy appears on the “planet looker,” from monolithic potato towers to Spudnik satellites.

That reminds me: everything you buy in this game is a potato, or some variant thereof. Landing a probetato on the mystery planet requires you to wrap it in heat resistant baking foil first, so it can stand reentry. It’s patently ridiculous, but it works. But Spaceplan doesn’t go the way of Cookie Clicker, seemingly solving the planet’s food problem by way of an infinite supply of baked goods. On the contrary, Hollands says that his game only runs for five to six hours, mentioning that he hates clicker games with endless play, and so has no plans to extend it. 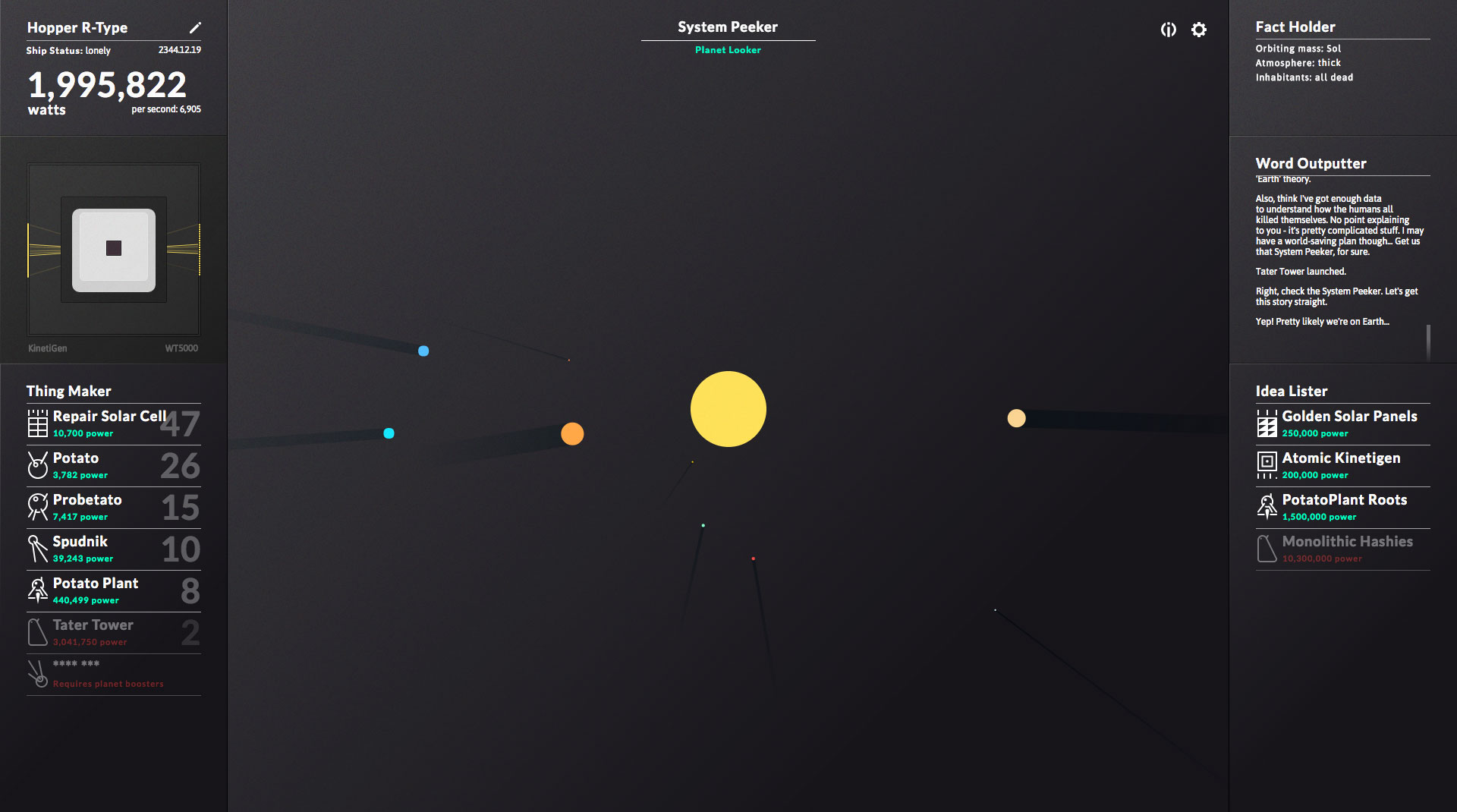 He’s the kind of person who wants to deliver something memorable, not life consuming. It’s why he’s most proud of the little touches “ like the screen glare which dims when you enter shadow.” Other favorites of his include how your resources get cut off temporarily if there’s a lack of sunlight, and his ultimate move of turning the sun into a black hole—”all of the satellites and planets use proper gravitational physics, which I think is another mechanic which helps to set it apart from other clickers. Watching orbital motion can be hypnotizing,” Hollands said.

All these little design touches mount up to make Spaceplan the exception to my recent avoidance of the genre. The fact that it looks smart from the get-go is a strong advertisement too. It’s definitely snared me again … the tab has been open for the last six hours as I’ve hopped in and out of writing. Uh oh.

You can play Spaceplan in your browser right now, if that’s what you fancy.