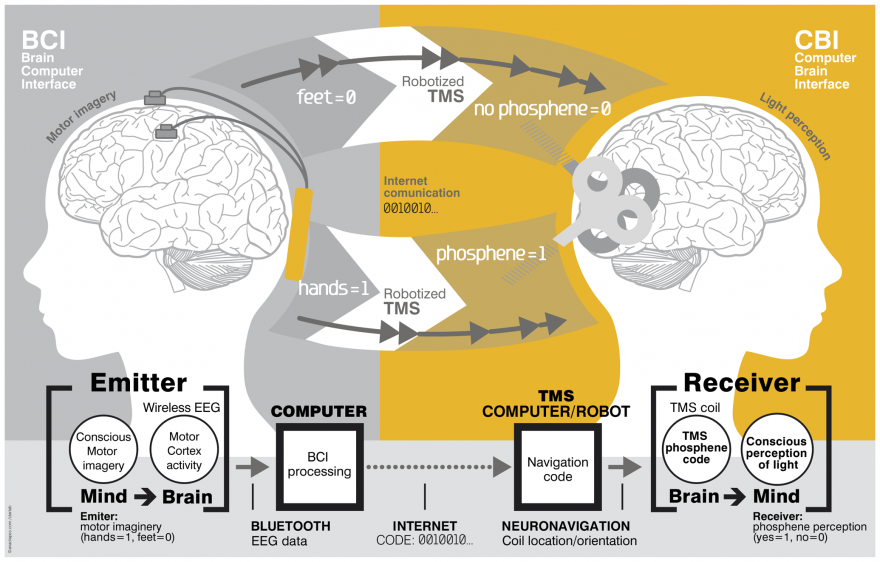 Back in 2011, The Simpsons aired an episode that takes place in the future, with a throwaway joke about the eventual successor to email—“bmail,” or brain mail. As Marge sits up in bed a familiar notification “bing” is heard. She then puts her finger to her temple, closes her eyes, and recites the various messages that she’s received. While we’re not quite there yet, researchers in Europe have made the first “human brain-to-brain interface” and published their results in the journal PLOS ONE.

A test subject in India, known terrifyingly as the “emitter,” was hooked up to a brain wave monitoring hat. The hat translated into binary code the electromagnetic waves it detected when the emitter focused on a simple moving object. That data was then transmitted via email to receiving subjects who perceived what the emitter saw as phosphenes, which is the perception of light where none is actually present. All of this was done without any invasive components, which is a first, and done with an 85 percent rate of accuracy.

While this falls far short of the completely wireless and instantaneous bmail that Marge uses to talk to her kids, it does present a milestone in synthetic telepathy and communications as a whole. Partially funded by the European Commision’s Future and Emerging Techonology program, the primarily Spanish team hopes to move their research “will open new research venues into cognitive and clinical neuroscience and the scientific study of consciousness.”