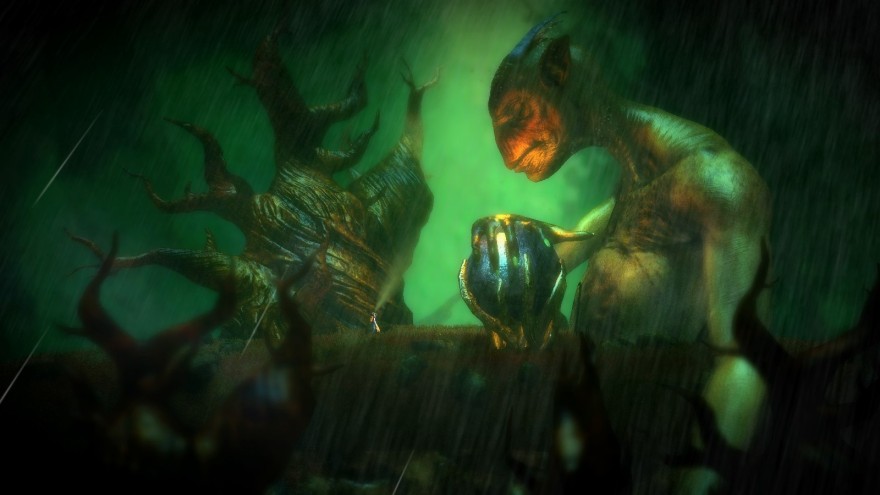 Detective Bleuth has a mechanical arm that will never tire of bringing a bottle of absinthe to his lips.

Daughter dead, wife divorced, Bleuth is a broken man with only his job and addiction keeping him alive. Chasing a missing millionaire, Bleuth rows across the toxic seas to enter Zone X. It was once a populated, idyllic land that swallowed thousands of its inhabitants when it fell to its current, hazardous state. It never stops raining.

the tough rigor of a film noir detective lost inside Wonderland.

The journey from the lighthouse to the man in the tower at the island’s end encompasses the entirety of Spate. It’s an hour-long journey marked by abstract platform game design, haunts from Bleuth’s past, and otherworldly sights—floating houses, huge horned demons, friendly long-necked creatures—that are either a result of the island’s warped status or hallucinations caused by the absinthe.

The absinthe lies at the very center of Spate. It’s the placebo to Bleuth’s inner pain, and the reason for his skewed, uncaring view of the world around him. He talks with the tough rigor of a film noir detective lost inside Wonderland. He can’t mask the pain of the loss of his daughter for very long; hence her ghostly image appearing every now and then, almost haunting the game. The absinthe prolongs Bleuth’s will.

Strangely, and disappointingly, the absinthe is underused. You can take a swig of absinthe at any time to distort the visuals and to jump higher. But at no point does the level design facilitate a need to do this. There are no platforms you can’t reach without the absinthe, nothing to be revealed with the wobbly sight brought on by a drunken stupor. You might completely forget about the absinthe should Bleuth not mention it during his continuous monologue for a few minutes.

There’s a metaphor begging to come out here, one that marries the gameplay to the narrative, and speaks of Bleuth’s need to overcome obstacles by using the absinthe. All of the components are right there, and yet the connection is never made, meaning that Spate feels incomplete.

Instead, Spate offers sections that feel like an effort to mix up the mechanics of travel for its own sake. Riding in the sputtering steam-powered flying boat and sliding down streams lacks challenge and goes on for far too long. Outside of this lie the game’s more enticing encounters with transparent bodies and surreal structures, which you learn are extensions of the elusive man in the tower.

What’s annoying about Spate is that it touches on tough subjects—depression, loss, addiction—and doesn’t dice them. But without stronger ties between these elements and the game design it feels unfocused which, ironically, reflects the blurred vision of the game’s alcoholic protagonist.