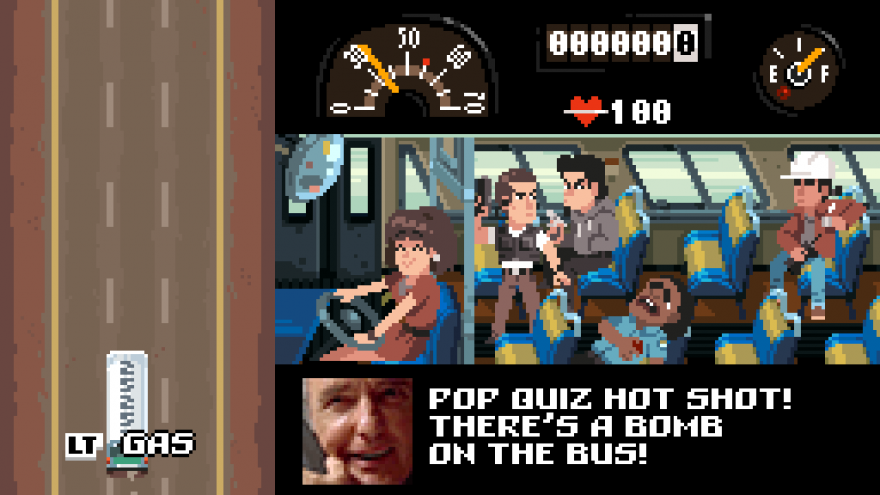 Speed, director Jan de Bont’s 1994 romp, is a film about game design. Its villain (Dennis Hopper) creates a series of puzzles, all of which involve bombs, which Keanu Reeves’ police officer must solve in order to save his life as well as those of innocent bystanders. Each of these sequences, most famously one involving a bus that will explode if its speed falls below 50 miles per hour, is a discrete level. It is therefore only fitting that Tribute Squirrel has adapted Speed as an NES game named Terminus.

The basic outline of Terminus is not news. It is a retread, but joyously so. You play as Keanu, the police officer on a bus that cannot be allowed to slow down. On the left side of your screen, you can see the bus and the obstacles it faces from above. It’s a bit like Frogger, but with more pyrotechnics. The rest of the screen, meanwhile, shows the inside of the bus, where passengers are freaking out and need to be calmed down by you-as-Keanu. (Remember: Speed came out in 1994, when people believed Keanu might one day become charismatic. The thought of his consoling passengers was therefore not the least plausible thing about Speed, even if it is now.) Oh, and you also have to flirt with Sandra bullock, so she doesn’t get too stressed while driving the bus. Multitask effectively and you have a chance of surviving.

The characters were always abstractions

Terminus’ aesthetic choices enhance the original ideas in Speed. The characters on the bus were always abstractions instead of real people. Now, rendered as blocks of pixels, they suddenly make sense. They are sufficiently human that they require your attention, but they could not exist in any other environment. Embrace the artifice. Speed was always just a game; Terminus lets you get in touch with its real, absurd self.