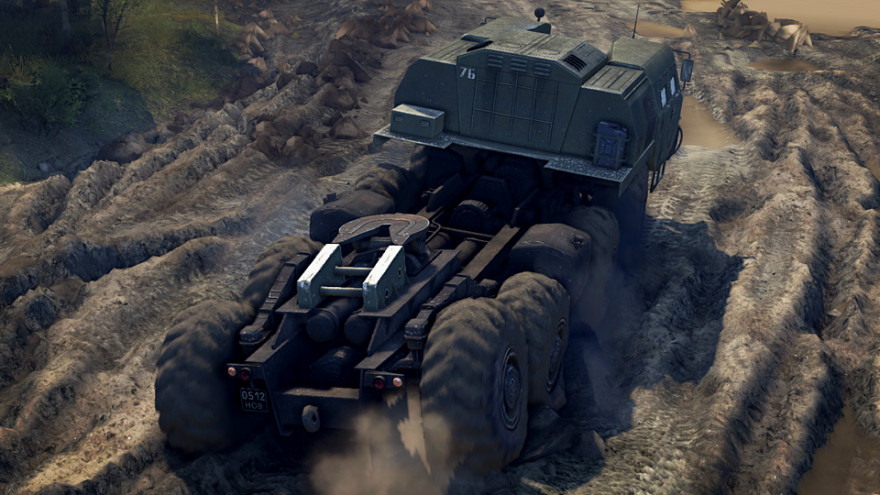 Mud has always been. Thick and sloppy, it’s our indigenous umber sludge. We pat it into pies, mold it into huts, its ooze smears our clothes and coats our shoes. When uncaring for the rules of cleanliness, we like to throw it at each other, roll in it, and then tease the earthworms that wriggle inside it. Mud is the paste of emancipation.

Videogames have always known this. In Colin McRae Rally, mud is a curvy canal ideal for sliding a car around. It’s the iconic cube of possibility for an entire generation due to Minecraft. Then, of course, there’s MUD—a dirt bike racing game named after the glorious lubricious substance.

Mud is a sticky enemy that will swallow your monster of diesel and steel without warning.

On the contrary, Spintires is the only videogame to ever make me respect mud. Heck, I was ready to offer it unholy sacrifices after countless attempts at driving a crane-loaded truck carrying a ton of logs through stubborn quagmires. Mud is a sticky enemy that will swallow your monster of diesel and steel without warning. Look at the map all you want, will yourself towards your destination, you’ll still have to face it. Mud is the roads and mud is all around—it will get you.

Spintires is perhaps the toughest driving game there is. Sure, Penn and Teller’s Desert Bus is the ultimate endurance of boredom. Gran Turismo will simulate real driving in race cars around the world’s hardest tarmac formations. Spintires will get you stuck in bogs, frustrated, helpless, and forced to start over with a sigh (unless you have a winch handy).

Playing Spintires is to endure the miserable, despairing death of Artax in the Swamps of Sadness over and over. Proceedings will be filthy and slow but mostly slipping forwards. Then, a rock or a water-logged hole ensnares your acceleration, and your tires churn inescapable walls around themselves as they writhe. Atreyu pulled at the reins of Artax as he sunk into the mud; shouting and screaming with exhaustion. Similarly, you will wrestle with an analog stick and repeatedly hammer a button in a desperate attempt to rescue your vessel as it’s swallowed by the slurry.

All of this sounds awful: Spintires should be thrust into a muck spreader and dispersed as tiny slops. But no, this is a simulator as punishing as mud is to any heavy vehicle driver that doesn’t comply by its legislature. You have to learn to measure its fluxing contours as you slither along its surface. In return, you may get to experience the satisfaction that comes after hardship that Sisyphus never did. Somehow, reaching that kind of mastery seems worth getting endlessly stuck in the mud.

You can purchase Spintires on Steam right now.