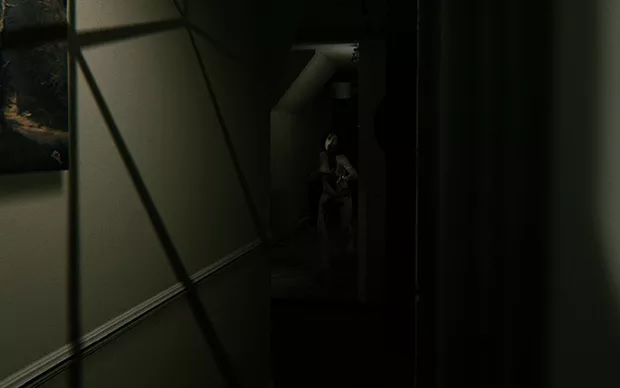 P.T. was a mirage. Thirsty for horror, we supped from its frightening wellspring, it sending shudders through our bodies and electric in our hairs. We were revitalized. Then it was taken from us. Konami shut it all down, both P.T. and the game it acted as a teaser for, the now vaporware survival horror game Silent Hills. We returned to the desert, the illusion dispelled, searching for the next tightly-wound nightmare to dip our dry skin into.

the one place we’re supposed to feel safe.

We may have found it. Allison Road is its name. It takes P.T.‘s looping corridor and corner and moves it to a suburban terraced house somewhere in Britain (one that looks eerily like a house I lived in while at university). All of its drama will take place inside this house and its vicinity. It’s to be small-scale, horrors contained in a few rooms and a couple of corridors, playing on the fear that arises when the familiar bricks of our home distort ever so slightly, letting in something unknown into the one place we’re supposed to feel safe.

The creator of Allison Road is Chris Kesler, who played P.T. back in August as immediately as he could, becoming enraptured with its ideas. Speaking to Movie Pilot, Kesler said that P.T. brought him to two realizations that dark August night: “1.) My house is scary as hell at night. 2.) You can make an entire short game with only one hallway. Who would have thought? Somehow it never occurred to me that something on such a small scale could totally work, but that night it really clicked.”

Kesler began work on Allison Road two nights after having played P.T.. He worked on it by himself for two months before bringing in two programmers, an animator, a musician, and a sound designer. By trade, he is a concept and environment artist, and has previously produced matte paintings for movies including Avatar, The Hobbit, and Guardians of the Galaxy. With this talent, he has been able to give Allison Road the sense of space that helped to make P.T.‘s architectural minimalism so convincing.

The virtual sets that he has constructed so far lay bare Kesler’s hyper-attention to correct spatial dimensions and the finer details of domestic décor. A lifelike lighting fixture attached to a ceiling holds up under scrutiny; its shadow bent across the corner between ceiling and wall, a circular plaster mold spread around its base with a flowery flair. The three cat statues sat atop the fireplace in the living room are equally as important in creating a sense of lived-in space as the shadows cast across them by the believable artificial lighting. The sink and its curved tap in the navy blue-tiled kitchen looks functional. An untidy duvet of a million creases begs to be spread out flat across the bed. A shower curtain pulled halfway across the bathtub seems teasing enough to hide what your imagination hopes isn’t there.

a loud noise followed by a scream

This baked-in realness is important to the kind of horror experience that Allison Road is meant to be. As if its cramped environment looks real then we are instantly drawn to the minuteness of its simulacra, playing slowly and fearfully, treading through the debris of someone else’s home. It means that when we get up from our computers after having played it we may find ourselves struck with the idea that whatever supernatural monster we faced could be in our own homes. It’s this parallelism with our own lives that horror loves to do: the fright of Laurie being stalked by Michael Myers in Halloween hits us double as the closet she hides in might be like the one in our own bedroom. In The Shining, Jack Torrance could be our husband. In Paranormal Activity, that could be our house. And so on.

This proximity to eerie authenticity is what Kesler is going for with the story of Allison Road too. The name in its title, Allison, is taken directly from one of the young girls whose life was taken during what has since become known as the Amityville murders—a horrendous, mysterious night that has since influenced a number of horror movies. Allison’s brother was convicted for murdering his two sisters, both his brothers, and his parents while they were sleeping in their house in New York on November 13th, 1974. The events in Allison Road tell a similar tale.

You’ll be hungover throughout the day, moving in and out of consciousness, shying away from the bright light. At some point you’ll find out that you have a wife and daughter but don’t know where they are. It’s not until a loud noise followed by a scream during the night that you suddenly wake up fully. It turns out that there’s a small family living above you, the parents of which got into a fight that, somehow, ended up in the murder of their daughter.

This catastrophe is the source of whatever nightmare ensues, moving through the darkness, haunting you at the end of corridors, finding your fear behind closed doors. It gives you until 3:15AM to solve the mystery of the daughter’s murder. If you don’t then your own demise will be exacted at the clock’s command.

It’s early days for Allison Road yet. But it seems promising enough to whet our hunger for acute horror experiences. And, perhaps most important, it carries with it the spirit of P.T., which was undoubtedly last year’s best horror game. Konami may have tried to exorcise it from existence, but having been a collector of video nasties before now—those video tapes that were banned in the UK back in the 1980s for their content—I know that any attempt to remove intense horror from people only makes them strive for it more. P.T. will live on through our desire for it.

Keep up with Allison Road on Facebook. It will be coming to PC with Oculus Rift support in 2016. Consoles will also be targeted.