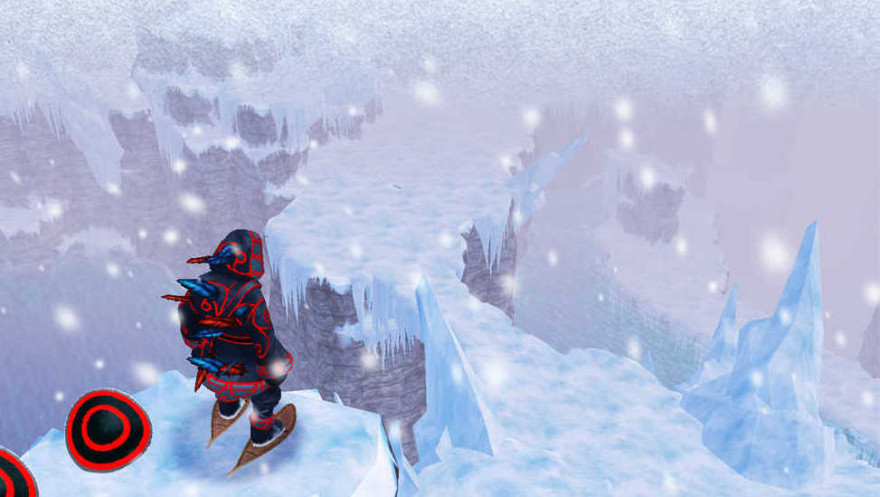 There’s a bright shining line dividing Spirits of Spring. On one side, there’s a perfectly serviceable navigation and puzzle game with an outstanding score. (When you open the game it suggests that players don headphones, and I would second this recommendation. The sound design is subtle, but outstanding.) On the other side of the line is a game that quietly but assertively subverts the expectations of what a quest game should do and how. Spirits of Spring is a game that wants to make a powerful statement about what survival means in the face of a form of violence that attacks and infects the victim’s soul. It largely succeeds, but it’s not always in a terrible hurry to do so.

It’s difficult to talk in detail about this bright line without spoiling a substantial portion of the late stages of an already brief game. These details, however, are essential to deciding whether Spirits of Spring succeeds in reaching beyond the expectations of what kind of experience a mobile game can provide, or whether it’s ultimately limited by the constraints of its form.

As it is a fable, the best way to resolve the problem may be to talk about allegory. Like Minority’s previous game, Papo & Yo, Spirits of Spring approaches a serious topic by placing a character in a magical realist environment populated by creatures and obstacles that represent elements of real-world problems. In Papo & Yo, a boy named Quico sought to both save and protect himself from a giant, lumbering, and occasionally violent monster who stood in for the boy’s alcoholic, abusive father. In Spirits of Spring, a boy named Chiwatin tries to save his world as well as his friends Rabbit and Bear from the damage inflicted by a trio of bullying crows.

The purpose of allegory is to generalize information in a way that makes it accessible to audiences that might not otherwise find it engaging. In Animal Farm, George Orwell restages the Russian Revolution of 1917 and the rise of Stalinism after Lenin’s death as a revolt by farm animals against a human farmer. It isn’t really necessary to be able to line up the major characters in Animal Farm with the corresponding figures in early years of the Soviet Union in order to appreciate the book as an illustration of the tendency of political revolutions toward co-opting and corruption, but it is the level of specific detail informing Orwell’s fable that makes it so successful as a generalization.

In Spirits of Spring, many of those details act as rewards to the observant player, unveiled judiciously during the course of the journey. What initially appears to be a somewhat clumsy control scheme is revealed to be a reflection of Chiwatin’s own physical limitations, the clumsiness of a young person not entirely acclimated to an adolescent body (and a contrast to the speed and sure-footedness of Rabbit and Bear, when the player directs them). When Chiwatin and his friends are attacked by the crows, they are left with feathers embedded in their clothing and fur. It’s a powerful way to convey the way that acts of bullying stick with their victims, and, in Chiwatin’s world, “shaking it off” is a literal action, although not always one easily accomplished.

If there is a challenge inherent to the project of confronting topics such as bullying and abuse within the context of an allegorical game, it might be linked to asking players, in effect to enter the game as the subjects of violence. Bullying, after all, is remarkably widespread, both for children and adults. Instead of generalizing a topic so the audience can understand an unfamiliar experience, Spirits of Spring seeks to offer the player an opportunity to re-engage a common and painful experience in a symbolic manner in order to engender—and offer—empathy. In Papo & Yo, the player accompanies Quico through an imaginative world he creates to escape his abuse, but also to reshape—to re-narrate—his experiences in a fashion that would give them meaning. By placing Chiwatin directly in his “real” world, rather than an imaginative alternate, the expectation might be that Spirits of Spring would be more intense, more particular of an experience, but in practice the game often seems to exist at something of a remove. It’s not always clear that there are particulars informing the generalizations. It’s possible that making the allegory more particular would have nudged the game toward pathos rather than empathy, or might even have shifted the focus of the experience toward the violence itself rather than survival. Symbols are difficult, slippery things. Sometimes distance is necessary to heal.

As it is, the greatest success of Spirits of Spring might be that Minority has built a game about bullying that isn’t a bullying simulator, and it does so by quietly undermining the idea of the hero’s quest around which so many games are structured. Chiwatin seeks objects of power, but these objects don’t function as he expects, and aren’t able to support the meaning he wishes to impart to them. Chiwatin’s journey is not one starting in weakness and ending in strength but one starting in rawness and inexperience and ending in wisdom and compassion.

Still, even in the compression and brevity of the mobile form, the story Spirits of Spring wants to tell would be stronger with a few more particulars. The experience of bullying is painful and enduring in its specificity—every feather in Chiwatin’s back should (and may) have its own distinct color and shape, but this can be difficult to discern on a mobile screen. As an allegory of healing, Spirits of Spring takes on the difficult task of cleaning an open wound, and trusts that each player will be able to trace the edges on their own.