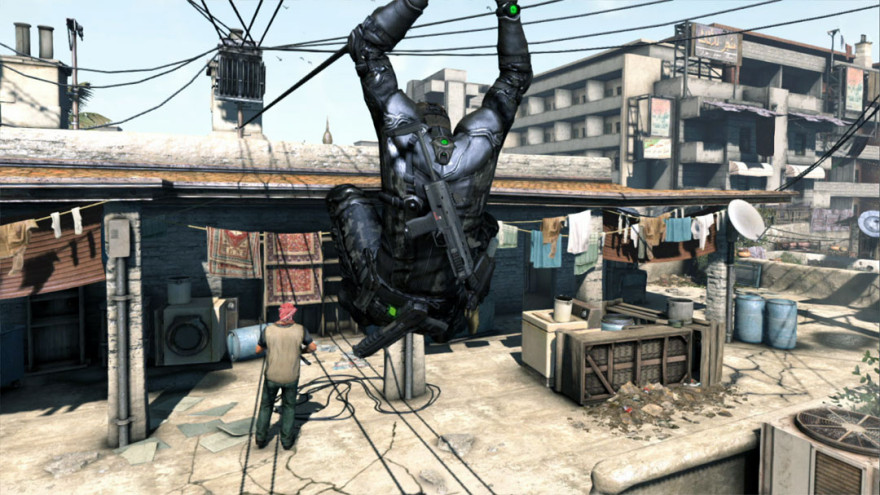 Splinter Cell: Blacklist’s overall intent is to portray Sam Fisher as a badass and to make you feel like a badass by extension. It’s profoundly successful in this regard. If an effective first person shooter empowers the player with brute force, Splinter Cell: Blacklist more than fulfills a genteel power fantasy, allowing you to stealthily navigate high stakes situations involving hostages, ticking dirty bombs and critical data. This fantasy has always been the allure of the Splinter Cell franchise. We’ll still let it entertain us, but now more than ever it contradicts our publicly stated principles.

The details change and are too convoluted to bother understanding in full, but the point basically is that Fisher protects us from very bad people. Sometimes these people have to die, which Fisher doesn’t have any qualms about. If it’s not jeopardizing the mission and it’s convenient, he’ll slither through a camp of generic terrorists in Afghanistan like liquid death. He’ll whisper bullets from his silenced pistol into their unsuspecting noggins while he hangs from a pipe on the ceiling above them. When he’s feeling lazy he’ll call in a drone strike. If no one can know he was there, or if the guards du jour happen to be American, there is a plethora of useful gadgets that allow him to sneak in and out of an Indian missile plant undetected.

Fisher was always deadly on paper, but in previous games getting him to perform seemingly simple actions was as complicated as landing an F-16 in a realistic flight simulator. In Blacklist, you can more easily execute on your devious plans to infiltrate real life and notoriously impenetrable locales. You can shoot your way through them, slip by undetected, or utilize an improvisational amalgam of both. Each approach is legitimate and immensely satisfying, making Blacklist feel like the Splinter Cell game Ubisoft has been trying to make since the series’ debut in 2002. It combines the methodical stealth mechanics that peaked in 2005’s Chaos Theory, with the fluid controls and much-improved combat reinvisioned for 2010’s Conviction.

Fisher’s conviction is key here. It’s irrelevant whether it was by Ubisoft’s design or by accident, but it just so happens that Blacklist’s form matches its content. Just as Fisher moves through harrowing situations with impunity, so much wiser than the enemies and blissfully ignorant civilians he’s trying to protect, so does he navigate moral quandaries regarding national security, all matters of foreign affairs, due process, privacy and so on. In both instances he is the watchman at the center of a panopticon. He sees all but is unseen, knows all but is unknown.

If your friend told you he read on the internet that the NSA has silent black helicopters and death squads—that’s who Sam Fisher is.

Fisher was initially conceived as an NSA superhero. He is a member of Third Echelon, a fictional executive sub-branch of that ominous acronym. If your friend told you he read on the internet that the NSA has silent black helicopters and death squads—that’s who Sam Fisher is. To make matters worse/more relevant, the antagonists this time around are a decentralized organization who call themselves The Engineers. They threaten Fisher and the American public via recorded messages that very much resemble Anonymous’ communiques. As far as videogames go, their demands are also reasonable and regularly expressed today by ordinary Americans. They want the U.S. to recall its troops from everywhere around the world.

Fisher doesn’t debate the validity of this demand for a nanosecond. It doesn’t matter whether it’s the precedent of negotiating with terrorists or the compromising of our interests overseas. We’re just made to understand that the demand is ridiculous on its face and a danger to us all.

Blacklist was also in development long before Edward Snowden confirmed that the U.S. has been mining our personal data, but some of the details used to establish its techno-espionage tone are so apt they’re unintentionally heavy-handed.

Among the many scary technologies and initials that are mentioned in passing (NSA, CIA, NCTC, ELIN, OPSAT), a character in the game casually notes that Fisher’s team is monitoring all forms of communications—which is PRISM, essentially, the NSA’s real, clandestine surveillance program that monitors Internet communications. During mission briefings, characters say that they gathered this or that piece of intel by monitoring calls or intercepting emails—all without warrants, of course.

Fisher is able to do these things by exercising the “Fifth Freedom” bestowed on him by the President (though eventually he circumvents her authority, as well). It gives him a license to kill, disappear and torture anyone, which is inevitably anyone who jeopardizes his mission. If Fisher was real, Snowden would surely be high up on his own personal Blacklist.

If Fisher was real, Snowden would surely be high up on his own personal Blacklist.

To give you an idea of how much more informed the plane Fisher operates on is, there’s a point in the game where the American Congress, rabid and inept, is on a collision course with the Iranian government over a crime Iran’s blamed for but didn’t commit. To defuse the situation, Fisher has to go over both of their heads, first by sneaking into the Quds Force HQ in Iran, then Guantanamo Bay.

These levels are exciting, satisfying and make perfect sense from an ideological perspective as you’re playing because they assume the existence of Fisher. His only desire is to keep America safe. He is given absolute power for this purpose but remains benevolent. In our world, the power Fisher wields exists, and is apparently used more and more. I would sleep a lot better at night if Fisher existed in our world—morally pure and on our side—but he doesn’t.

The people who’ll play Blacklist will cover the entire political spectrum and many of them will be the same people protesting drone attacks, the NSA and its invasion of our perceived privacy. As they play the game, will they be disgusted by the securitist ethos of its protagonist? Or is the fantasy Blacklist offers so compelling, its point of view so rhetorically sound once they’re engulfed in its world, that they won’t even notice?

As they play the game, will they be disgusted by the securitist ethos of its protagonist?

In the real world, we want to sit and debate a course of action (if at all) in Syria, weighing the sacrifices of our troops versus the suffering of the Syrian people versus the stability of the region and its effect on our quality of life. We want Obama to seek the Congress’ approval, to coordinate with the U.N. and the neighboring countries. It’s a democratic ideal we are theoretically willing to pay for with staggering amounts of bureaucracy and petty political bickering.

But in our fantasies Fisher is already there, eliminating those who need to be eliminated, securing precious documents, defusing bombs, etc. He can’t wait for Congress to approve his op. He has to circumvent the proper channels and processes we demand from our government because there’s no time for such silly formalities when World War III is about to start. Fisher has no doubt that he’s killing the right people, and he sure as hell not about to stop and debate whether or not he should be able to spy on American citizens to acquire any intel he may or may not need. If he needs to torture someone along they way, so be it. That Blacklist is so enjoyable and Fisher’s actions, in context, so admirable, reveals the hypocrisy between what we claim we want and what we secretly desire in these moments of crisis.