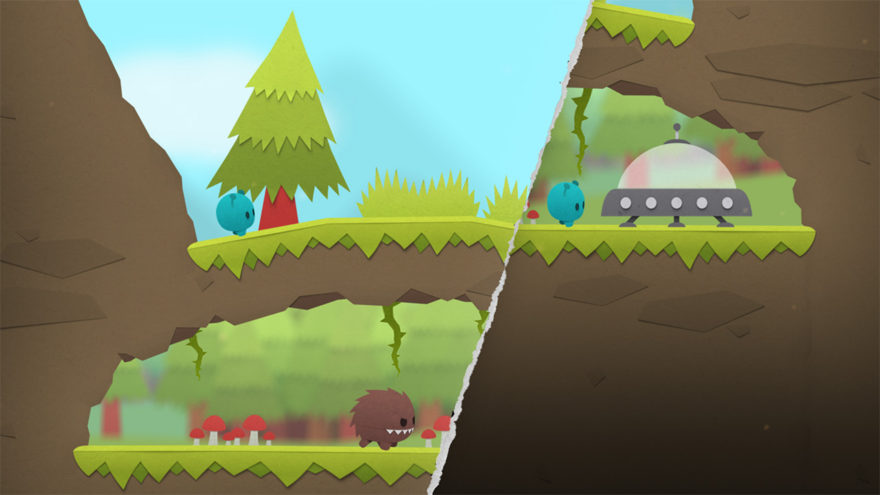 Sometimes mobile games feel a bit hopeless, forever trapped to the realm of Fruit Ninja and Angry Birds copycats. But then a really good Match 3 game comes along, or a port of a transportation planning simulator, and faith becomes restored. In the new iOS (and soon Android) title Splitter Critters, the mobile platformer formula is twisted to show what shines in mobile games, rather than forcing in what doesn’t.

Splitter Critters is a platforming game from the Canada-based two-person development team RAC7 Games, the same developers behind Dark Echo and Super Surf Bros. In the game, the player swipes across their smartphone’s screen to split the world apart, then reorient the platforms accordingly to lead the spherical critters back to their stagnant spaceship.

In a way, the swipe to cut mechanic reminds me of the most recent Paper Mario game, where the Wii U gamepad was used in a similar fashion to cut a path out for the ol’ plumber. Meanwhile in Splitter Critters, cutting with a swipe isn’t enough—you have to shift the separate pieces of the world too. The game originated from the Ludum Dare 35 game jam in April 2016, where the theme was “Shapeshift.” After the team completed the game jam and saw the game’s potential, they opted to polish it into a fuller release for mobile devices. Nearly a year later, the game has been released in its intended, ever-swipable form.

You can get Splitter Critters on iOS for $2.99. It will release on Android later this year.