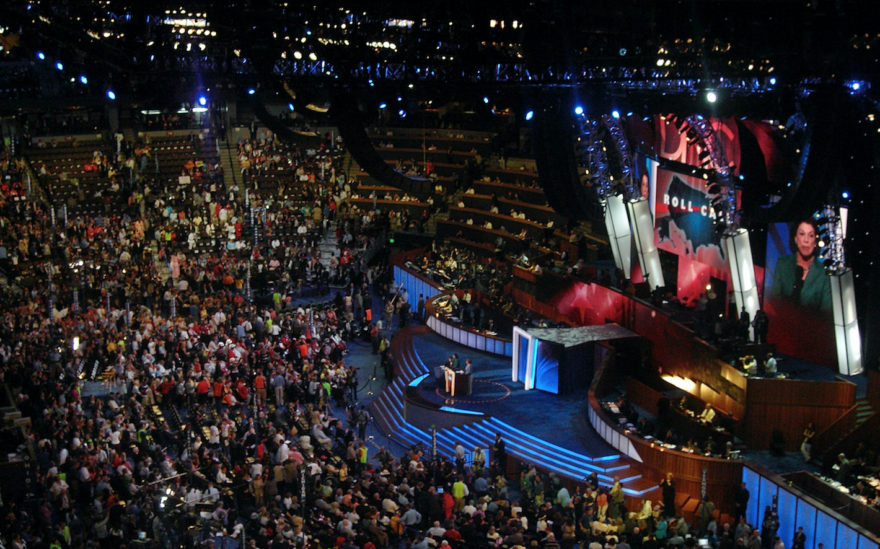 Sometime around the moment Barack Obama won Iowa, a little cartoon light bulb lit up above the heads of some 10,000 or so campaign managers and associated staff nationwide. The light bulb was duly followed by a thought bubble containing the words “young people also vote, sometimes.” Since then, every political campaign, Super PAC, and fair & balanced cable news network has been racking its lumbering, collective brain in search of ways to mobilize young voters in support of one candidate or another. So far the only surefire technique is “have your candidate be Barack Obama or Bernie Sanders,” but that hasn’t stopped the graying establishment from experimenting, which is how we wind up with headlines like “Democratic National Convention Streaming Options Include Twitch.tv.”

can we take a moment to appreciate how amazing this is?

God, this is amazing. Can we just take a moment to appreciate how amazing this is? We are talking about a really historic event here, a Democratic convention that might be the last one ever before a certain bulbous businessman turns the country into the world’s most gaudy autocracy, and will definitely be the first event of its kind to feature a coordinated “fart-in,” and the whole thing is going to be streamed on Twitch.tv, a platform whose previous most-culturally-impactful event was Twitch Plays Pokemon, a powerful argument against blindly obeying the will of the masses if I’ve ever seen one.

The Republican National Convention has yet to confirm that Twitch will be among its own streaming platforms [Update: Twitch announced that they will also stream the Republican National Convention], but considering the GOP’s abysmal performance among young adults in recent years, it is unsurprising that they would once again lag behind their agile—dareisay spry—Democratic counterparts in this, the bleeding cutting spear-point razor-edge of gutsy campaign gambits.

Of course, what’s most exciting about this development is not the content itself, which will probably be excruciatingly boring (ResidentSleeper), but the fast-scrolling chat that will accompany it. Imagine the memes! How many times will we see “Delete Your Account” posted? How many crude-yet-hilarious Monica Lewinsky copypastas will be unleashed when Bill steps on stage? Will there be even a single moment during Bernie Sanders’s raspy re-endorsement speech when the chat is not simply overflowing with “Kappa” emotes?

And afterwards, long after the stream has gone offline, will there be any artifact from this era that will engender more interest from archaeologists of the year 3016 than the permanently-saved Twitch chat log that will accompany the recording of this convention?