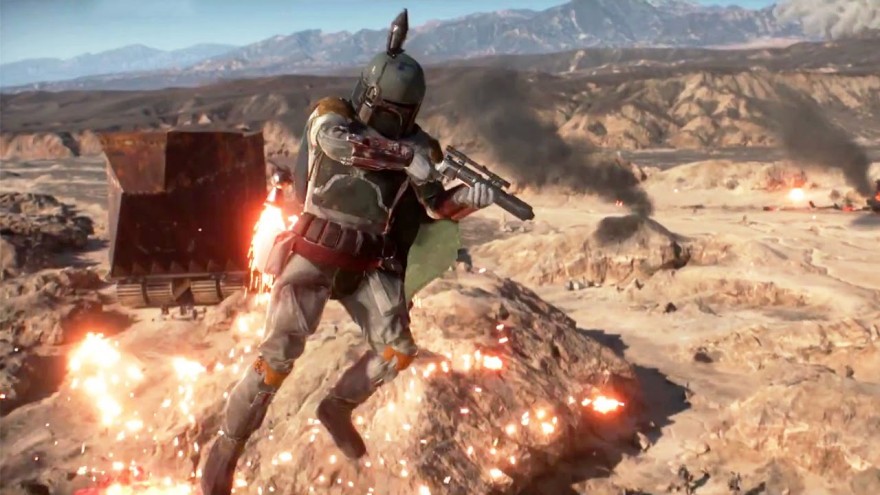 After the release of Star Wars in May of 1977, the Kenner toy company could not make enough action figures to meet the demands of an eager consumer base. Even into the Christmas season, the company still had inadequate stock, so Kenner instead sold people an “Early Bird Certificate Package”—an empty box containing a diorama stand, some stickers, and a certificate for four toys to be mailed to the purchaser when they finally became available the following February. People snatched them up, of course, placing empty boxes under trees, assured in the knowledge that in a few short months, their orders would be fulfilled. Now, as I play through a simulation of the Battle of Hoth for the thirtieth time, I find myself thinking about that empty box and the promises of a diorama, and I start to think that maybe the gorgeous sheen on Star Wars: Battlefront is in fact a glossy finish on a paper stand.

My love of Star Wars is inseparable from my memories of playing with the old toys. Born too late to actually see the film in theaters and born too early to enjoy the series of action figures that popped up in the late ‘90s, I collected a cache of worn-out action figures from my older cousin and some neighborhood friends. A broken Snowspeeder, half of a Y-Wing, a fragile and yellowed Millenium Falcon, and a host of action figures with chipped paint and missing limbs became actors and props in inelegant pantomimes of the scenes I loved. The epic battles I’d seen through the kluge of an old VCR playing a copy of a copy of a Star Wars VHS on an even older TV came to life in my hands, even as I remained blissfully unaware of the market machinations that churned beneath my desire to capture that world and its characters.

a glossy finish on a paper stand

As I’ve gotten older, the commercial aspects of the space opera I so love have become apparent to the point of distraction, but I am never one to argue that the influence of the market bears some sort of artistic sin. The comparison between the Galactic Empire’s hunger for total order and the Star Wars commercial machine is an easy one to make, though we should not do so cynically. After all, even the most romantic of us can at least appreciate the complex relationship artists have with their respective markets, cashing in on trends and celebrity as quickly as any other field of work. Divorcing any work of twentieth century art from the commercial pressures of its time does it a disservice, and Star Wars is no different. More so than the Joseph Campbell “hero’s journey” structure, Lucas’ suspicion of military power in a post-Vietnam America, and the risk of turning science fiction cinema—a genre dominated by drive-in schlock and late-night television fodder—into a blockbuster gold, the Star Wars phenomenon gained momentum through merchandise.

We can see evidence of this relationship between Lucas’ creative energy and his merchandising prowess in the earliest film. From the spectacular space battles to the numerous aliens in the cantina, Star Wars begs for its iconography to be incarnated in plastic, and as these creative spheres overlapped, they gave rise to landmark blockbuster brilliance. The Imperial assault on the Rebel’s base on Hoth remains my favorite action sequence of all time, even if it is clear that the AT-ATs and Snowspeeders seem like so much fodder for toy store shelves. Star Wars shows us a universe where walking action figures like a bounty hunter clad in tactical armor could strut with the intimidating cowboy swagger of Lee Van Cleef, where a impish green puppet could be one of the most powerful, fully-realized characters in the entire saga. Such characters were created to sell products as surely as to chew scenery, but they illustrate how creativity and commerce merge and produce fascinating, and sometimes profound, Hollywood art.

Star Wars: Battlefront stands as the latest example of the commercial machine that Lucas engineered. The game advertises itself as a nostalgia-drenched Star Wars experience, and it shows in the details, from the pitch-perfect sounds of the weaponry to the way the ground buckles under the weight of an Imperial AT-AT. Battlefront is, appropriately, an audio-visual love letter to people like myself, who are perpetually chasing an authentic Star Wars encounter. Like the action figures and presold tickets for the film that has yet to be released, Battlefront makes no attempt to disguise its branding. It is a shame, however, that it offers so little in return for an investment.

For everything Battlefront nails, it reveals something crushing in its limited scope. The guns, for instance, sound and look perfect, until the player realizes how similar they are. Ships handle with a Rogue Squadron-esque lightness, which at first feels fun and simple, but the airborne vehicles have such little bearing on the goals of the ground battles that they seem superfluous (at least outside of the aerial-vehicle-only Flight Squadron mode). Teaming up with a squad of heroes to square off against a group of villains is silly and delightful, yet imbalances among the characters quickly make the scenarios lose their charms. As I played, I started to realize that each design decision is committed to offering only a bare-minimum, tightly-controlled slice of a game meant to hook the consumer’s interest for the real release coming soon. The shooting is acceptable, the voice acting barely passable, the maps and scenarios just adequate enough.

to hook the consumer’s interest for the real release

All these problems could be forgivable, even endearing, if Battlefront allowed the player some modicum of control over her experience beyond the election of a few scripted modes. The previous Battlefront games  encouraged the player to mount campaigns across the galaxy during the Galactic Civil War and the Clone Wars, and Battlefront II even allowed players to create playlists of their favorite battle scenarios. In other words, those games provided a toy box experience befitting the Star Wars creative ethos, urging the player to tinker with the pieces of the game to craft her own section of the Star Wars universe. The current Battlefront offers no such option, and in doing so, it avoids the possibility of becoming accidentally wonderful. This rigid design makes Battlefront feel unavoidably like a product, a bit of Star Wars branding on a piece of merchandise devoid of that creative spark that generated so much people love about that universe.

Nevertheless, those moments when a flaming TIE Fighter crashes to the ground as my team battles for control of a key area show the slightest glimmer of what the game could have been—or, crucially, might still become. The machine still churns; the Empire will grow; and some art may yet surface. As it stands, however, Battlefront offers everything my childhood experience of Star Wars did not. For all its polish, it brand-name polish, it lacks that creative energy found in building battles from faded toys and dumb ideas. Battlefront imposes limits and gates on an expansive universe, reigning in instead of expanding the possible ways to become part of that world. As such, the game remains mercenary in its goal of selling an experience solely on those feelings we have about that galaxy far, far away. Instead of offering a chance to inhabit that space, Battlefront only shows us Star Wars at a distance, perfectly preserved in small pocket dioramas tucked away behind the rose-tinted glass of a toy shop window.