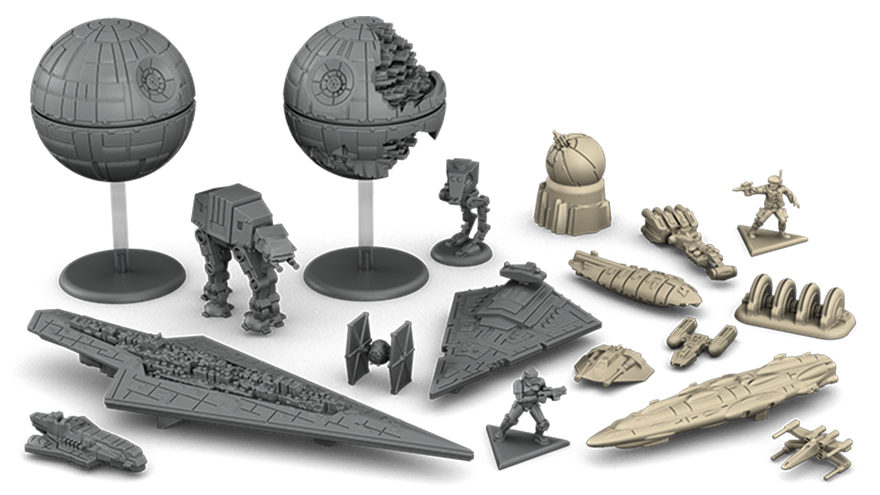 Rebellion is nothing if not epic. The box comes with two map boards which, when placed next to each other, form the Star Wars galaxy. One or two Imperial players hunt down one or two Rebel players, who have hidden their base on some planet. If the Imperials find the rebel base and destroy it, they win. If the Rebels run down the game’s timer (made easier by accomplishing specific missions or triggering events), they win. Both sides draw on a deep pool of characters, abilities, and tactics, as well as a bowlful of plastic ship miniatures.

At the heart of Rebellion is the underdog vs. oppressor narrative of the films. Much has been made in Fantasy Flight’s promotional materials about the asymmetrical competition. The Empire begins (and typically maintains) a vice grip on the galaxy, while the Rebels snipe at their weak points. Moments from the film—a single X-Wing fighter blowing up the Death Star, for example—feel organic and surprising in execution. The asymmetry in Star Wars: Rebellion encourages a heavy role-playing bent, as well. Playing the Empire, I found myself growing increasingly smug as my probes helped me zero in on the Rebel base; as the Rebellion, I rode the high of every foothold and victory, no matter how small.

Inhabiting the characters and situations of canon is at the heart of Midrash, which is the Rabbinic tradition’s own sort of sacred fanfiction. By fictionalizing parts of the Torah, one can exaggerate flaws or virtues of a revered figure or draw out buried truths they see in the text. Midrash creates a space where the devout can dive into the text free from the constraints of canon. The word is derived from darash (דָּרַשׁ), which means “to seek” or “to inquire.” Via Midrash, Abraham contemplates deeper truths as the son of an idol maker, and an infant Moses’ hand is guided by God to sooth an Egyptian Pharaoh’s suspicions.

Star Wars canonists defend their beloved franchise with the same zeal as Biblical and Tanakh apologists. In 2012, George Lucas spoke on the infamous “Han shot first” controversy: “Well, it’s not a religious event. I hate to tell people that. It’s a movie, just a movie.” But Star Wars canonists are rife with anti-revisionist paranoia. The question of whether or not, in A New Hope, Han Solo shot Greedo first in the cantina scene, is both about the character of Han Solo but even more about the narrative integrity of the films: Does the Star Wars journey change the “cold-blooded killer” to a scruffy good-hearted leader?

Star Wars: Rebellion upends the canon in favor of the more playful, creative approach of Midrash. On the tabletop, players are given space to mash iconic moments of the films together as a palate of actions and game moves. In a sense, Star Wars: Rebellion is emblematic of Disney’s act of slashing the Star Wars canon when it bought the IP from Lucas. The metagame is filled with brilliant little psychological asides. “The rebels wouldn’t put their base on Yavin IV,” an Imperial player might think. “That would be too much like films.” But why shouldn’t they?

it gives itself up to becoming a pure tactics game

The preservative aspect of canonization is also somewhat deadening. Nintendo’s valiant attempts to give Zelda any sort of continuity in its 2011 book on the RPG’s many fictional events, Hyrule Historia, also blunted the magic of the series. Games like Dark Souls show how the elusive and speculative narrative can do more work to captivate players than one in which every loose end is tied, every motive explained. Midrash brings the sacred to life by “filling in the gaps” of the text. But Star Wars: Rebellion is all bullet points.

In reducing its characters purely to skills and attributes, it gives itself up to becoming a pure tactics game. Leaders block each other like chess pieces and complete perfunctory moves, but don’t take on life beyond their ability to fulfill mission requirements. It’s an empty Midrash. For better and worse, Rebellion’s characters operate on a plane separate from the galactic war that unfolds onboard. With lower stakes, the leaders carry little emotional weight. Chewbacca or Lando can’t die during an assault, and Boba Fett can’t really expire in the Sarlacc pit. While events and abilities are pulled directly from the films, these are essentially colorless game moves: no more and no less.

Combat is similarly drab. While the strategy and scope are ripe with tension, land and space combat feel tedious. Units are approximated to dice values, which are rolled and re-rolled; damage is assigned; tactics cards are drawn and played with little rhythm or drama in both ground and space theaters. When the combat is unfamiliar, it comes off as confusing. When it is overly familiar, it becomes monotonous. During my second playthrough, my fellow players would groan whenever someone initiated combat. Rather than lend personality, the intricate miniatures become fiddly data bits to tally and settle up at the end of every battle.

Star Wars: Rebellion is all about epic scale and intrigue. The mechanics allow players to fill in the gaps of the source drama and occupy the headspaces of each side: the urgency of the hunt as the Imperials, the imperiled subterfuge of the Rebellion. Putting the array of boards, ships, and tokens on the board gives a sense that something is really happening. When it all works, it works beautifully, until a player initiates combat, and the pace slows to a crawl. The slow combat wouldn’t be damning if it weren’t so central to the game—except it is. And if Star Wars: Rebellion doesn’t work as a tactics game, or allow any meaningful rewrite of its characters’ stories, then all the rules and operatics don’t really count for anything. It simply doesn’t work.