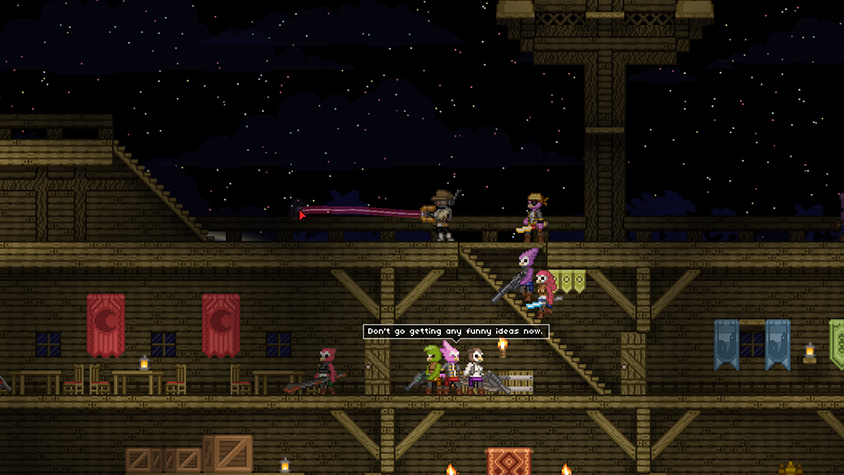 As the acid rain began to let up I dug my way back to the surface. After a few quick swipes with my pickaxe, tar blocks rained down, letting a crack of light into the pit I made as a quick refuge. I’d only been planetside for a few minutes and I’d already fended off hordes of pitchfork-tailed piglets and ran for cover from acid rain. Out of the pit and a little worse for the wear, I foraged on through dark pools of liquid that soaked ground and painted the land black. Eventually some bone-like plants came into view. I took out my axe to chop down the ivory sprouts, and sure enough, they yielded bones that I quickly stashed in by bag. A few more steps and I came across more bones, racks of femurs and a whole rib cage that simply rose out of the ground.

This was disturbing enough, but then the acid rain started pouring again. I pulled out my pickaxe again and began digging straight down. Unable to see where the tar stopped and the surface ended, I fell into a crevice. My descent was fast and deep enough to slightly sprain my mining robot, but more unsettlingly, I heard an audible crack when I landed. I lit a torch to find I had fallen into a bone cavern, with walls and floors made of skulls and bones.Life on Alpha Ai Thaliman 14 IB is hard—perhaps the harshest planet I’ve set foot on in my days playing Starbound. It’s a game full of both wondrous and often dangerous worlds, just like 14 IB. In my interstellar travels I’ve come across exotic planets filled with cotton candy trees, hostile creatures, and advanced races marooned on a foreign planet just like me. But if there’s one universal truth that ties this whole galaxy together, it’s that you’re alone and almost everything is out to kill you.

In the Starbound universe, you take on the role of a hapless space traveler who has just fled their home planet only to crash-land on another one. The first thing you learn about Starbound is that pretty much every planet is completely different, exotic in a way you didn’t know it could be. The next thing you learn is to arm yourself. Even the cuddliest looking critters (and they often are quite cuddly) won’t hesitate to eat your character’s face off.

For the most part Starbound is better played as a completely solitary experience, much like Super Metroid was. Remember that feeling of dread when you led Samus through the Ghost Pirate ship? Starbound evokes this same feeling throughout the entire game. Every time I landed on a new planet, I braced myself to discover interesting new ways to die. 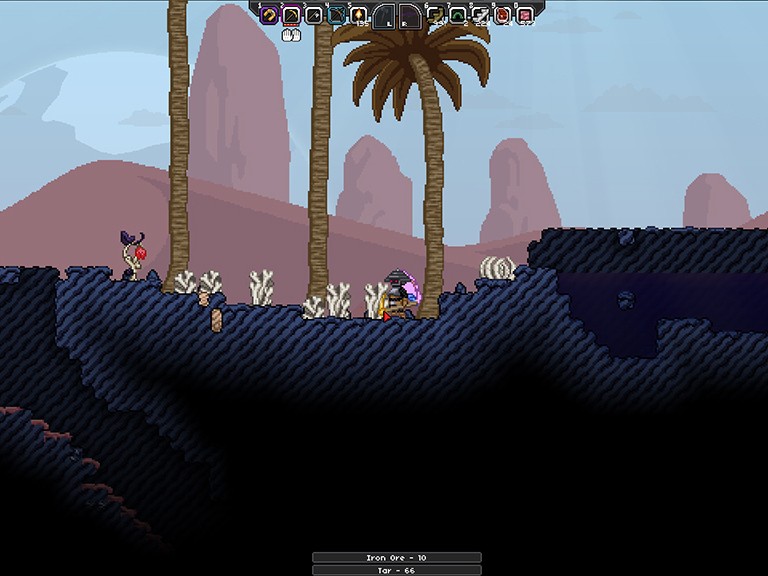 Oh, this is a planet with acid pools. Oh, this adorable critter is actually quite hostile. Oh, this planet is Avian ruin is filled with things that want to kill me.

In many ways Starbound resembles a classic sci-fi tale simulator. My first experience somewhat mirrored Carson Napier’s first encounters in Pirates of Venus, a sci-fi novel by Edgar Rice Burroughs. After passing through the thick cloud cover shrouding the vibrant civilization on Venus, Carson fall into a Venusian forest and is promptly assaulted by a one-eyed jaguar with a stag beetle’s head. Napier is saved by group of native humanoids wielding spears and swords whilst wearing loincloths. He thinks:

Venus was inhabited! But by what? What strange, arboreal creatures built causeways high among these giant trees? Were they a species of monkey-man? Were they of a high or low order of intelligence? How would they receive me?

In a similar fight for my first Starbound life as an actual “monkey-man” I happened across a seemingly harmless ferret-turtle hybrid. It attacked, but I got away, only to to stumble upon a group of space bandits that promptly dispatched me.

Many classic sci-fi novels, or (at the time) magazine serials, would often explore alien worlds, full of the allure of unknown worlds and exotic extraterrestrial life. These worlds were both more advanced and more dangerous than our own. Many of Napier’s initial adventures took place aboard a floating landship that he used to attack other pirates and slavers. There was a sort of natural logic to the violence on Venus, a sense of adventure and plunder the world instilled into Napier.

By the same token, it’s easy to conclude that the universe in Starbound, while advanced and traveling through the stars, is also in a time of turmoil. On another planet I visited with my RAM Zapper, I discovered an abandoned underground bunker filled with supplies. The planet’s surface was mostly an overgrown forest with a few clearings where rusted guard stations stood in quiet sentry, and hostile robots roamed inside.

Starbound is littered with abandoned installations such as these; which begs the question, what happened here? Who lived here? How long has this place been abandoned?

With Starbound still in beta and lacking little to no exposition or story, these are questions seldom answered.

With the game still in beta and lacking little to no exposition or story, these are questions seldom answered. But it helps build an air of mystery. We gleam, from our skirmishes with death, that the universe is fantastically advanced but in ruin; that rayguns are in heavy supply but empathy is not. Where there isn’t obvious trouble, like the kind you’ll find on a prison planet or a space pirate airship, there are indications of it, of installations from an advanced world that has long since passed.

H.G. Wells’ The Time Machine, too, depicted such a world that “moved on.” When he visited Earth in 802,701 A.D. towards the later half of the book, Wells introduces a new species of Morlocks, a seemingly completely otherworldly group or primitive underground lurkers. But the subterranean creatures are later revealed to be a splintered evolution of humans after the populace was segmented into a group of workers and freeloaders for eons. Wells might have had an underlying message against communism, but it’s another example of what Starbound, and classic sci-fi writing, do well. Underneath all the dazzling technology and exotic beauty there lurks only danger.

Eventually I found my way back up out of that bone cavern on Alpha Ai Thaliman 14 IB. A few diamonds richer, it was time to move on to another planet, so I beamed back to my ship. There are still plenty of other worlds to explore out there; a friend told me she found one with ash volcanoes, but I’ve yet to encounter a single block of lava. I click on the navigation computer to find another random planet and to spool up the FTL. Perhaps the next one will be more hospitable.