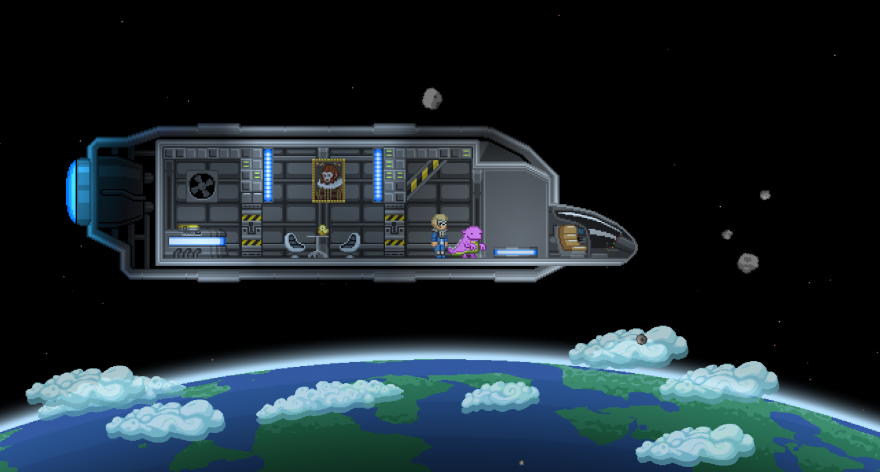 Socrates asserted that “man must rise above Earth to the top of the atmosphere and beyond, for only then will he fully understand the world in which he lives.” This sentiment is at least in part why NASA was established, and why investments are made in “NASA’s grand dream.” It’s why Elon Musk’s SpaceX was able to raise over $1 billion for spaceship manufacturing from companies like Google, with rocket rides for the public booked out for years. And maybe it’s why many of us, as kids, couldn’t help but stare up at the vast, velvet expanse of the night sky, watching the stars glimmer, and wonder, “What else could possibly be up there?”

Space is the final frontier, after all. So perhaps it’s only natural that even at a young age, humans are predisposed to an inexplicable fascination with exploring and inhabiting the mysterious void that lies beyond Earth. It’s here, at this point, that Starbound zooms in, a game that wants to grant your wildest imaginings, science fiction without the leash. Yes, it says, there are bazooka-wielding penguins and little gnome people up in space. Go and find them.

It’s a game that wants to give you a lot, maybe even everything

Childhood wish fulfillment is the defining element of Starbound. Finn “Tiy” Brice, the project leader of the game, even called Starbound his “dream game,” one that captures the charm of 16-bit classics and throws it all into a blender with vast numbers of vivid, randomly generated worlds. It’s a game that wants to give you a lot, maybe even everything, but above all it emphasizes and encourages classic exploration. This is done, in part, by making it almost too easy, as with just a little time and effort you can stumble upon uninhabited bungalows surrounded by bizarre fauna, jungles of pink-leafed tentacle-shaped trees, or other such fascinating settings, all available just beyond the cold hunk of metal that is your spaceship. I even found a rare, playable violin worth a lot of pixels—the game’s currency—simply by exploring a fungus-filled cavern for a few minutes. The game provides uncountable discoverable treasures like this, all of them contained in a  sandbox that bears many similarities to the one provided in Re-Logic’s Terraria (2011). Which makes sense: Tiy was, in fact, the lead artist on Terraria.

That grand aim of Starbound’s is ubiquitous. And so, not only does it want you to be able to do anything you like, it wants you to be able to do it as whoever you want to be. To this end, the character customization is uncomplicated: you can choose hair style and color, clothing style, and skin tone. But you can also choose what race you are. And it’s there that Starbound starts to show its own personality, providing a unique spread of seven races that could only be the brainchild of someone high on sugary Lucky Charms or, I don’t know, Galactic Crunch. By way of example, the Novakids: glowing cowboy-esque humanoids composed of solar gases, contained by a supercharged metal brand—usually star-shaped—smack dab on their face. And each different race provides you with a characteristic armor bonus. My own character was an Avian, a bird-like humanoid that dwells in forests, and her armor bonus provided me the ability to glide. Because why the hell not.

I grew to become quite fond of my weird little Avian character and her two-handed rocket launcher, not because she was particularly strong, but simply because, in Starbound, I got to play as a freaking bird with a rocket launcher. Meanwhile, my friend deeply bonded with his weapon, a giant Erchius eyeball that shot out terrifying laser beams from its blood-red pupil. Really, there’s a race, a hair style, a weapon for everyone here, and Tiy has clearly ensured that his game would create no boundaries for self-expression. In that way, Starbound manages to avoid the issues of other procedurally generated games—games that eschew the charm and personality of handcrafted design for random generation—by giving the player a chance to play as God and impose their own personality and style on the game.

Starbound’s strive to give you complete freedom isn’t always a boon, though. In fact, the start of the game is disorienting for the very fact that it gives you so much independence. For example, the game begins when a horde of gargantuan tentacles (of course) envelope earth, forcing your character to make a rapid escape on a commandeered spacecraft that quickly crash lands on a new planet. Your AI companion gives you a list of objects to acquire to repair your ship—in this case, core fragments—but doesn’t provide you with information about where to get those items. The lack of orientation results in a slow and frustrating beginning to the game, one that is further accentuated by the logical questions that will pop into your head. Questions like: How long is it going to make my new ship not look like a rusted ol’ piece of junk? How long is it going to take until I find cool weapons? How long will be before for the story becomes compelling, if there even is a story? These questions itch at the back of your mind and, for some, may turn into a reason to abandon the game for good.

But, at the same token, it’s impossible to ignore that it’s that same lack of orientation that has you realize that there are no rules and no questions, only play. The game solves its openness by throwing absurd action your way. It’s like as soon as you dwell too long on what to do, Starbound thinks it fit to send a band of space pirate penguins to raid you. Tiy has said, the game is to be played more as a fun, social experience rather than just a single product: “Our goal in developing the game,” he told Curse, “was for the players to always find something new, every time they play.” I didn’t even realize I could capture and tame wildlife until several days of play, and once it dawned upon me that I could swing from ropes Indiana Jones-style, well, spelunking in outer space suddenly became an option. On top of these small discoveries, the game is both procedurally generated and filled with community-generated content, meaning that there’s potentially no end to the surprises you can stumble upon. If childhood is about discovery, then Starbound succeeds in emulating it, dropping you into a place where wonderment abounds, where rules and logic and narrative can all be tossed out the space shuttle window, if you so desire.

That brings me to the planets that you can discover in Starbound, which for the most part, look nothing like ones I’ve seen before. I’ve searched for comparisons in other science fiction and come up empty. This is perhaps where the fact that the game is procedurally generated really comes into its own. These aren’t worlds reminiscent of those seen in Star Wars, or Stargate, or Dune. Starbound manages to differentiate itself from the usual planetary tropes, in part because it banks on its near-absurd childlike imagination, but also due to allowing its players to create entire communities on their servers to reflect their particular interests. The effort is stretched to each planet’s culture, as you can examine every object—decorations like pots and hanging furs on the wall—to learn about a certain homeowner through detailed descriptions. It goes further: each species has its own unique set of NPC interactions so that your understanding of each planet’s culture is piecemeal. That means that every time you play, you can adventure episodically, like the cast of Star Trek, to explore a new, unpredictable variation of a planet and the secrets it hides.

Playtime waits for no one

Once, while turfing a new planet, my friend found a weapons chest that gave him a fantastic sword upgrade from the get-go. I checked the same place in my game and found only dirt (I’m not bitter, I swear). To assuage my jealousy, and to stop my temper tantrum, we started playing in multiplayer mode. I learned something that day: fighting enemies alone in Starbound is hard. It’s not just the number crunch that makes it so, it’s the alienness of its randomized rules that catches you off guard. For example, one enemy took on the form of a turtle, I thought it would be slow-moving. Nope. This isn’t Earth—Starbound likes to subvert expectations at every turn. With another player in co-op, Starbound’s combat moves firmly in the direction of ridiculousness, especially as you’re barking orders at each other about the need to avoid, of all things, damned penguins driving huge tanks, as if it were a weird game of Pretend. As we learn when we are young, playtime is best experienced with a friend, and Starbound seems to have been made with this as its mantra.

If Starbound has one major downside it’s that there is no pause button. A pithy consideration, I know, but it means if you’re  exploring a cavern found deep within the recesses of a new planet, you cannot pause to take a much-needed bathroom break. And since enemies can spawn at any time, you can’t walk away from your computer in confidence, either. But the lack of a pause button almost feels apt: in Starbound, there can be no pause button, no way to suspend you from this childhood fantasy. To pause would be to remind you that, in the end, Starbound is just a game—that you are an adult, likely with responsibilities and distractions back on Earth. And like your childhood friend, the game doesn’t want you to leave: there’s just too much to show you, too much for you to find, and too much to explore. Playtime waits for no one. You wanna get up to pee? Nope, you’ll have to sit there and do the wiggle dance, holding it in. Just like when you were a kid.