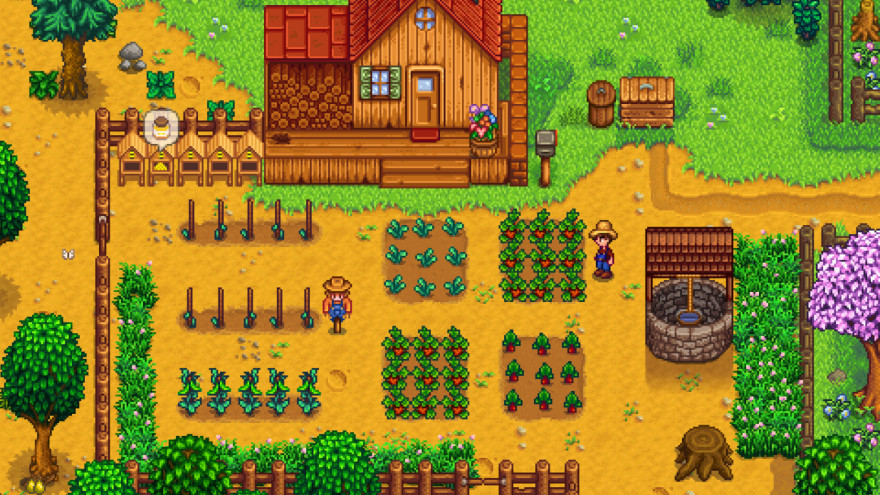 There is no point in kicking sticks around over Stardew Valley’s similarities to the Harvest Moon series, Natsume’s long-running farmlife simulator. Not to be confused with the also really good Neil Young album, “Harvest Moon”, which Stardew Valley does not riff upon outside of the honkey tonk atmosphere in the single’s bar waltz music video. And that is probably a coincidence.

Stardew Valley is an homage, a send up, and there is little mistake to make about that. It likes Harvest Moon a lot, and those who like Harvest Moon will probably like it in return. It likes the graces of the seasons, drifts of winter snow and spring’s cherry blossoms breezing through the air. It likes the innocent and isolated towns, full of mild-quirk townsfolk and not a one among them threatening. It likes escaping there, the prologue having an emphasis on fleeing an office cubicle. It likes filling a wooden box with grown produce, foraged flowers, and fish. It likes falling in love and getting married. It likes having a playful dog.

We see games in love a lot. Games that love Mario and Zelda, and wear that love on their sleeve; they’re in high supply. The more important question is, when love letters blush this hard, why would you play simulacra over the simulated? In small gestures, which mount enough to fill a silo, you can spot the fork in the road where the cultures and the sentiments between the American-made Stardew Valley and Japanese-made Harvest Moon’s split.

The first thing you’ll notice upon arriving to your little farm is that it is massive. It would be in-game weeks before I bothered seeing its full parameters. It’s initially so overrun with rocks, tall grass, and unwanted trees that I felt like Bart Simpson asking Mrs. Glick which ones are the weeds, hoping I wouldn’t need the iodine. I cut myself the land around my house to farm, holding off the rest indefinitely. Whereas Harvest Moon is conservative on the space, forcing you to be strategic with agriculture,the strategy in Stardew Valley is the opposite. It tests your modesty if you decide to build a beansprout Babylon—a god who makes themselves a garden so big even they couldn’t water it every blinking day.

And you can go big, too. Like Harvest Moon, Stardew Valley has a stamina bar, but it’s much more generous. You’ll get bored of farming before you get tired. For a while, I simply couldn’t find enough farming in the day to spend my energy on, instead exploring, fishing, and dabbling with the payloads of side-quests and minigames throughout the town. The excess strength is, perhaps, in reserve for crazier weekdays. Stardew Valley has all these things it wants you to enjoy.

The Harvest Moon games project a fairly Japanese mentality that work—successful labour day in and day out—is its own zen-like reward, hard lives lived well. Stardew Valley has far more rewards, treasures in a mini-roguelike cave crawling quest, a far off desert to explore, a museum to curate, courting a mall goth or just the satisfaction of spelling out your favourite meme in cauliflower across your estate. Produce is also more expensive in Japan, and each piece of purchasable produce has an element of craftsmanship. Perfect dodgeball-sized apples are the standard and a meal-sized portion, while the west is familiar with bags in bulk as to compliment a balanced diet. Even the locations of your home, in Stardew Valley starting on the left, Harvest Moon often on the right, seems to shadow how one reads English and Japanese. That, again, is probably just an odd coincidence.

There are bounties on potatoes and fish you can fill. There are dozens of local yocals to socialize with, from the shopkeepers to the survivalist living in a tent to the literal wizard. The wizard is introduced as part of a side-plot to save the magical-slime infested community center. Saving the decrepit town institution links arms with a different side-plot involving a Wal-Mart conglomerate muscling in, eying the land, and threatening the community’s fragile essence.

Stardew Valley has a lot of things. It’s got scents of Animal Crossing in there; some of the collection and decorational aspects. And the expanse of farmland is clearly given to you in a Minecraft-ian gesture, encouraging you to go wild with your detailed visions of gardening or ornate crop circle patterns to maintain. Harvest Moon is not that game, and its bells and whistles are traditionally much more limited, structured, and harder circled on the calendar. Despite all odds, it seems Stardew Valley is a different game than the one it mimics. And a pretty fun, different game at that.

There will be plenty of overlap between the kind of players who enjoy both games, but wary be the worker who is concerned with the grit within the soil.