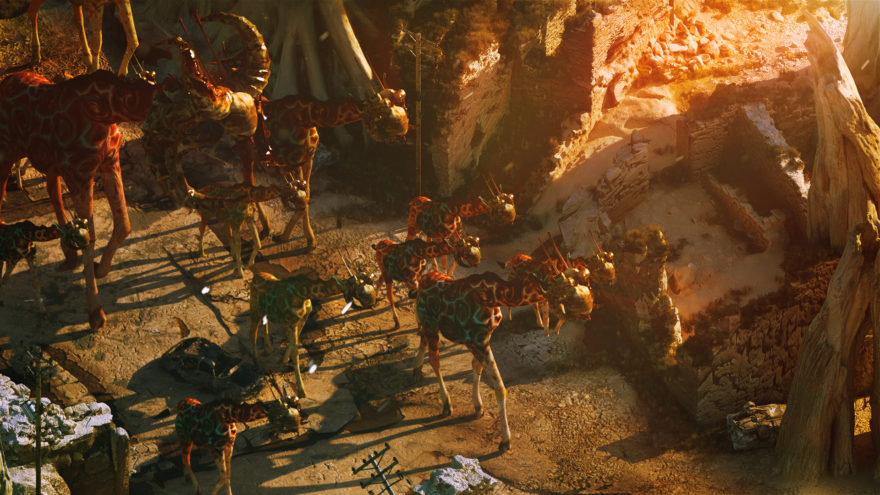 “Set in a distant future in an evocative African landscape … he is not from this place or time …” states the tantalizing blurb on Beautiful Desolation‘s website. Those are the only hints regarding the narrative of the next adventure game from The Brotherhood, the team behind bleak sci-fi horror adventure Stasis (2015) and its upcoming side story Cayne. Implications of dimensional and time travel aside, it’s the isometric landscape of distant future Africa that intrigues the most. It’s a world years in the making, first conceived before and then developed during the creation of Stasis.

heads bulging with lumps of flesh and massive horns

“Several years ago we had an idea for an adventure story set in a post-apocalyptic world. During our brain storming sessions, we kept circling back to a particular story. It was pushed to the sidelines while the STASIS story blossomed,” states the game’s creator Chris Bischoff in a recent update on NeoGAF. “But now that we want to do something different outside the STASIS universe, and still create an experience that fits into our niche of point-and-click, isomeric adventure games.”


Those years of world-building and the desire to continue evolving the isometric adventure have coalesced to form Beautiful Desolation, created through scanned miniatures, 3D models, and 2D paintings.  Few details are available at the moment, but the reveal footage offers a peek into a place that has survived ruin, of life thriving among the remnants of civilization.

A herd of mutated giraffes walk past the rusting remains of vehicles and power lines, their long necks topped by heads bulging with lumps of flesh and massive horns. An indistinct creature swims alongside a cliffside waterfall and long-abandoned warship. Even the one interior we see isn’t devoid of signs of life, a holographic display contrasting with the rustic lodge atmosphere of hide rugs and mounted skulls. Clearly people—or at least intelligent beings— still exist in this far-future land.

Beautiful Desolation is very early in development, but is expected to release on PC at the very least. A crowdfunding campaign is slated for sometime this year. To follow the game’s development, follow The Brotherhood on their site and Twitter page.